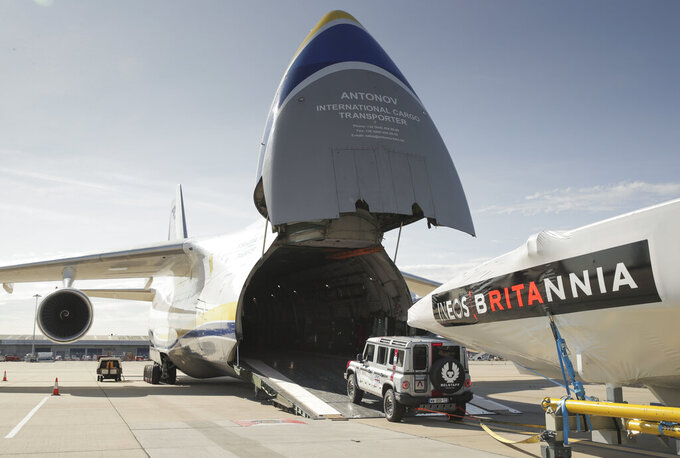 This Sept. 28, 2020 photo provided by INEOS Team UK shows the INEOS TEAM UK America's Cup race boat being towed onto an Antonov cargo plane by the teams new prototype INEOS 'Grenadier' 4x4 at the start of its journey to Auckland, New Zealand, at London Stansted Airport in England. England's never-ending quest to win back the America's Cup it lost so long ago is taking another step forward with the team's relocation to New Zealand for sailing's marquee regatta. (Mark Lloyd Images/INEOS Team UK via AP) 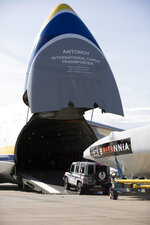 England’s never-ending quest to win back the America’s Cup it lost nearly two centuries ago is taking another step forward with INEOS Team UK’s relocation to New Zealand for sailing’s marquee regatta.

While Sir Ben Ainslie and his mates are undergoing a mandatory 14-day quarantine in an Auckland hotel, their new race boat was scheduled to arrive in a giant cargo plane sometime Thursday New Zealand time.

The 75-foot foiling monohull left the team’s UK base in Portsmouth by truck Friday and was flown out of London Stanstead Airport on Monday.

“It’s a big, big moment for the team,” Ainslie said by phone. “If you look at all the issues that have been going on in the world with coronavirus and so on, the challenge we’ve taken is big enough without the COVID pandemic, but when you throw that into the mix it becomes a huge challenge. I’m really proud of the team and really proud that the chance to get the boat onto New Zealand shores and waters in one piece, on schedule, is a fantastic achievement in itself.”

INEOS Team UK is the second challenger to arrive in Auckland. The New York Yacht Club’s American Magic flew its second boat to Auckland in early September. The third challenger, Luna Rossa Prada Pirelli Team, is in the process of moving its boat from Italy to New Zealand.

Defending champion Emirates Team New Zealand and the three challengers were set to sail their radical sloops for the first time last spring but America’s Cup World Series preliminary regattas in Italy and England were canceled due to the pandemic.

Their first competition in the new boats will be the Christmas Regatta Dec. 17-20, which would have been the third ACWS regatta. The Prada Cup for challengers is set for Jan. 15-Feb. 22, with the winner advancing to face Team New Zealand in the 36th America’s Cup from March 6-21.

Ainslie said it will be 10 days to two weeks before the boat is ready to be splashed. For now it’s being called RB2 — race boat 2 — until it is christened and named. Ainslie said a lot of structural testing was conducted in the shed in the UK.

The team is sending its first race boat, Britannia, to Auckland via ship to have as a backup in case there’s a catastrophic failure or collision that damages RB2.

He then formed a British team for the 2017 America’s Cup. It lost to Team New Zealand in the challenger semifinals.

While Ainslie has hoisted the America’s Cup in victory, no one has hoisted it in victory on behalf of England. The schooner America won the trophy that would bear its name by beating a fleet of British ships around the Isle of Wight on Aug. 22, 1851.

The British haven’t come close to winning it back, which is what drives Ainslie.

“I mean, personally, that’s the motivation for getting a team together on the back of 2013 and we’re now a second-generation team,” he said. “Everyone in the organization is motivated by that goal of getting the Cup back to Britain for the first time in its history. That’s a very unique challenge in world sport really, when you look at the history, 170 years.”

In full flight, the fantastical-looking AC75 sloops ride on hydrofoils on the rudder and the leeward foil arm, with the hull and windward foil arm completely out of the water. When the boat tacks or jibes, the foil arms switch positions.