Broncos star polishing both his deejay and pass rush skills 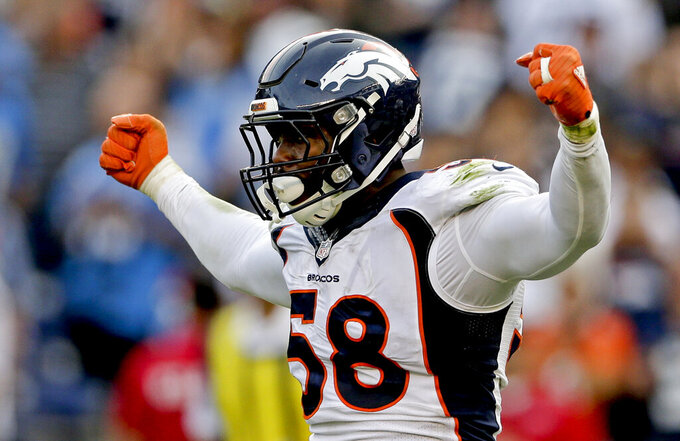 FILE - In this Dec. 6, 2015, file photo, Denver Broncos outside linebacker Von Miller celebrates a sack against the San Diego Chargers during the second half in an NFL football game in San Diego. Miller was selected to the 2010s NFL All-Decade Team announced Monday, April 6, 2020, by the NFL and the Pro Football Hall of Fame. (AP Photo/Gregory Bull, FIle)

Von Miller longs to make a name for himself scratching vinyl just like he did sacking quarterbacks.

DJ Sauce Von the Don i s the Denver Broncos star linebacker’s alter ego, one whose fledgling club concert career has been thwarted by the coronavirus outbreak.

Miller said he spends part of each day working out in his home gym after cutting short his offseason training program in northern California because of the stay-at-home orders during the pandemic.

Miller dished the deets on his deejay adventure during a conference call this week after being named to the NFL 2010s All-Decade team.

He said he had to cancel big plans spinning and scratching during sporting events this offseason.

“I had a lot of stuff booked up and I was ready to go,” Miller said. “We had the Kentucky Derby. We had Daytona and all this stuff. All that stuff of course got canceled.”

So, it was back to the lab for DJ Sauce Von the Don.

“I’ve got the whole setup in my basement, everything they use in the clubs and the concerts I’ve got here in my basement," Miller said. "I just go practice every single day. It’s fun. It’s loud music, new music.”

More than the pulsating rhythms of the clubs, however, Miller longs for the roars of the crowd again.

After a disappointing eight-sack season in 2019, Miller rededicated himself to his strenuous offseason program that helped him become one of eight unanimous picks to the All-Decade team.

“I was in San Francisco before, working on the sand and the stairs,” Miller said. “When the coronavirus started going crazy, we came back. I’ve got a gym here at the house. It’s still not the same as San Francisco, but we’re going to be able to hold it off until we can get back to San Francisco.

Miller, who turned 31 last month, has collected seven All-Pro honors, eight Pro Bowl trips, a Rookie Defensive Player of the year honor and a Super Bowl 50 MVP award to go with 112½ sacks, including the playoffs.

He’d like to double both his sack and championship ring totals.

“I just have to rush the passer better,” Miller said, adding, “I don’t want Super Bowl 50 to be my high point. I just have to keep on playing. I really feel like some of my best ball is coming up. Winning Defensive Player of the Year and leading the league in sacks is attainable with the team I have and the type of people that I have around me. It’s more attainable than ever. I have to take advantage of this opportunity that I have.”

Although the departures of Derek Wolfe and Chris Harris Jr. leaves Miller as the last remaining starter from the Super Bowl 50 champs, Miller said he’s excited about the team’s offseason moves.

Miller has spent time at the Pro Bowl with two of the Broncos' recent acquisitions, defensive tackle Jurrell Casey and cornerback A.J. Bouye.

“We put together a great team on paper it looks like," Miller said.

Edge rusher Bradley Chubb (knee) also returns next season, and having Casey push the pocket from the inside should help both Miller and Chubb stack up the sacks again.

“It’ll be incredible,” Miller said of playing alongside Casey. “I’m looking forward to it. He’s a great player, five-time Pro Bowler. I’ve been around him at the Pro Bowl several times. ... We can do all sorts of things together.”

The only other teammate remaining from the Broncos’ title team four years ago is kicker Brandon McManus.

“Man, I’m old,” Miller cracked. ”... At the same time, it’s an honor and a privilege. They say the average lifespan of an NFL player is 3 1/2 years. To make it this far is a true blessing. To have guys like Wolfe and Chris around me that made it this far as well, it’s incredible. It’s a true blessing.

“Before, they said, ‘Take advantage of the time that you have playing football because it’s going to be over in a blink.’ That is true," Miller said. "I’ve realized that from Day 1. I’m just trying to continue my blink and make my blink as great as possible.”