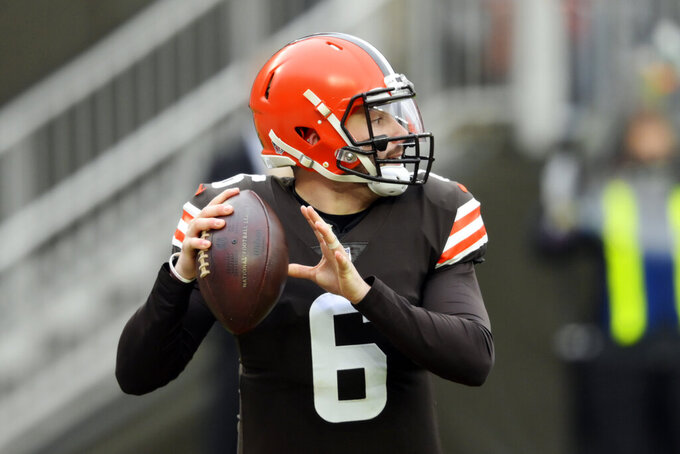 Cleveland Browns quarterback Baker Mayfield looks to throw during the first half of an NFL football game against the Pittsburgh Steelers, Sunday, Jan. 3, 2021, in Cleveland. (AP Photo/David Richard)

For the second straight day, the team's headquarters and training facility stayed closed due to a COVID-19 flare-up that has knocked coach Kevin Stefanski out of Sunday night's game in Pittsburgh and wreaked havoc on the Browns' preparations.

There seemed to be a possibility the wild-card game could be moved back after Dr. Allen Sills, the league's chief medical officer, told NFL Network "there was some spread from one individual to another” among the Browns.

However, a league spokesman said Thursday there “is no change to the status of the game” at Heinz Field.

As his first postseason appearance draws near, Mayfield said he's been doing all he can at home to get ready.

“A lot of band and bodyweight stuff,” the quarterback said. "Doing a lot of walkthrough of my footwork and trying to tie those in together. Just getting up, moving around like we potentially could. Everybody’s setup is different, and that is how it was in the offseason, so you have to find a way to get the most out of it and do it safely.”

The Browns and their die-hard fans waited almost 20 years to feel playoff excitement again, and it's been doused by forces beyond their control.

Still, Mayfield said he and his teammates will do all they can to represent themselves well in the wild-card game — their second matchup with the rival Steelers in eight days.

“There are no excuses, but luckily, we just played them last week so it is not like we are practicing against a whole new defense,” Mayfield said. "We have to be ready for the wrinkles, but luckily, we have game-planned against these guys and everybody is sitting here in the second-week-in-a-row preparation for the Pittsburgh defense.”

Wide receiver Jarvis Landry echoed Mayfield, saying the Browns have to deal with the circumstances as best as they can.

“Practice is a big part of everything that we do and understanding that, but at the same time, it is 2021 and it feels like 2020 still and everything is still so unexpected,” Landry said. "We have to make the most of these Zoom meetings, out of the walkthroughs and out of the time that we have to be able to go over all the details.

"Because this game is happening obviously, despite what we are going through as a team. I do not think the league looks at is as a disadvantage or anything like that, so I think for us, we have to just continue to prepare and get ready to play the game.”

On Wednesday, starting linebacker B.J. Goodson was activated from the list and safety Andrew Sendejo came off Thursday.

The Browns are also down Stefanski and five assistant coaches.

For special teams coordinator Mike Priefer, Sunday's game is a scenario he knew was possible due to the pandemic. He just never imagined it happening in the playoffs.

Priefer will handle Stefanski's game-day duties — offensive coordinator Alex Van Pelt will call plays — as the Browns play their first postseason game since Jan. 5, 2003. Priefer said Stefanski had drawn up a pandemic contingency plan in the spring and the Browns are putting it into action this week.

But while Priefer will take on Stefanski's role — and wear headphones he despises — he knows it is just temporary.

“Make no mistake, this is Kevin’s team,” said Priefer, a Cleveland native. “He’s laid the foundation of a smart, tough, accountable, resilient team. And I’ll do whatever’s asked of me to help get the Browns a win on Sunday night. I do love this city. And our fans deserve our best effort, and that’s what we plan on giving them on Sunday.”

This is the second time Priefer has been an acting head coach. He had to do it on late notice in 2016 for one game in Minnesota after Vikings coach Mike Zimmer had emergency eye surgery.

Priefer had less than 24 hours to get ready. He's had more time to prepare this week, but it's been anything but routine.

“It’s like every morning you wake up and say what else can you deal with?” he said. "Everything’s been different. But from the leadership with (GM) Andrew (Berry) and Kevin on down to the coaches and even the players, we’ve been so adapted and so flexible, we’ve been so resilient in fighting through every piece of adversity that we’ve had to deal with this year.

“We’ve done a great job with that thus far and we’re going to continue to do so.”

At least there's one thing the Browns don't have to worry about: more Terrible Towel-waving Steelers fans.

Pittsburgh's request to boost capacity from 2,500 to 6,500 fans was denied by state officials. So Cleveland will try to end its 17-game losing streak in Pittsburgh without their ears splitting.