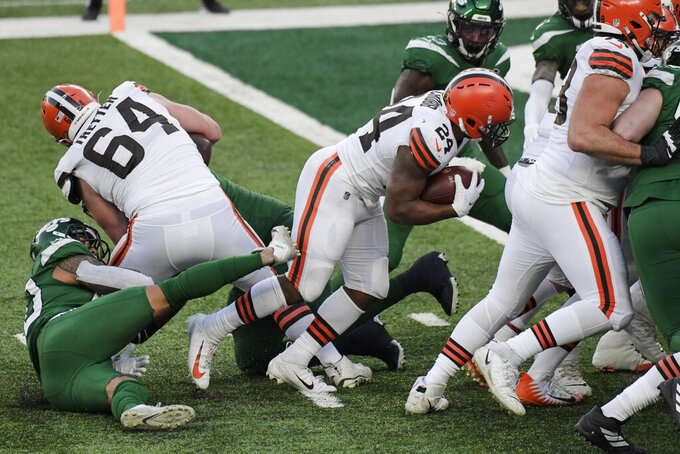 Cleveland Browns running back Nick Chubb (24) rushes for a touchdown during the second half of an NFL football game against the New York Jets, Sunday, Dec. 27, 2020, in East Rutherford, N.J. (AP Photo/Bill Kostroun)

CLEVELAND (AP) — The Browns ended 2020 without practicing for their first game in 2021. COVID-19 has Cleveland's playoff hopes in peril.

Issues with the virus intensified Thursday for the Browns as top cornerback Denzel Ward and linebacker Malcolm Smith tested positive and were ruled out for Sunday's game. The team also canceled practice as it prepares to face the Pittsburgh Steelers — with a playoff spot up for grabs.

The latest positive tests forced the Browns to initially close their facility to do close contact tracing. However, after consulting with the NFL, the team decided to call off practice days before it biggest game in years for “the health and well-being of our players, coaches and staff.”

Despite the new cases, Sunday's game at Cleveland's FirstEnergy Stadium remains on schedule, according to an NFL spokesman. The league is closely monitoring the Browns’ situation and overseeing standard contact tracing.

The Browns aren't the only team wrestling the virus in the last week of the regular season:

— Quarterback Ryan Fitzpatrick, who came off the bench to rescue the Dolphins last week, will miss Sunday's regular-season finale at Buffalo as Miami tries to clinch a wild-card berth.

— Los Angeles Rams defensive lineman Michael Brockers was placed on the COVID-19 reserve list, joining receiver Cooper Kupp ahead of the Rams’ season finale against Arizona. Cardinals safety Chris Banjo will not play Sunday after being placed on the reserve/COVID-19 list.

— The Atlanta Falcons will be without center Alex Mack. He went on the COVID-19 list after the team stopped all in-person work at its practice facility on Thursday.

For the Browns, Ward's surprising addition to the COVID-19 list has further impacted preparations for Pittsburgh. If they win, the Browns (10-5) will make the playoffs for the first time since 2002 and end the NFL's longest current playoff drought.

But they'll have to do it without three defensive starters: Ward, their best defensive back; linebacker B.J. Goodson, the defensive signal caller; and safety Andrew Sendejo.

And with kickoff a few days away and the virus seemingly not under control, it's possible Cleveland could be down more players.

While Ward is lost for at least this week, the Browns did get back star Jarvis Landry and three other receivers who missed last week's game. Rookie linebacker Jacob Phillip was also activated.

Ward, a first-round pick in 2018, had recently returned after missing several games with a calf strain. Not only will he sit out against the Steelers, but he could also be lot for Cleveland's first-round playoff matchup — assuming the Browns get there.

On Wednesday, the Browns only practiced for an hour indoors and coach Kevin Stefanski expressed confidence his team would be ready for the Steelers, who throttled Cleveland 38-7 in October.

“We were able to bring the guys in,” he said. “Had a nice long individual period, had walkthroughs, had some team periods and had some seven on seven. It was brisk. Obviously, we were without a few guys for various reasons so at times, it was piecing it together to give a look for the offense, defense or vice versa.”

The losses of Ward and the others will test Cleveland's depth, but the Browns could be catching a huge break with Steelers coach Mike Tomlin choosing to rest several starters, including quarterback Ben Roethlisberger and perhaps star linebacker T.J. Watt. Roethlisberger is 23-2-1 in his career against Cleveland.

However, even at less than full strength, the rival Steelers (12-3), who clinched the AFC North last week, won't make things easy for the Browns.

“We want to make sure we give Cleveland all they want,” said Pittsburgh defensive coordinator Kevin Butler. "We’re not going to let them walk into the playoffs.”

It's been a taxing few days for the Browns, who didn't win a game three years ago but have turned things around under Stefanski.

Last weekend, after a positive test led to players being ruled out because of high-risk close contact with Goodson, the Browns were missing eight rotational players, including those top four wide receivers, and lost 23-16 to the New York Jets.

Landry, Rashard Higgins, Donovan Peoples-Jones and KhaDarel Hodge were cleared for practice Thursday and their return will be a huge boost for quarterback Baker Mayfield, who was throwing to players pulled off the practice squad hours before kickoff against the Jets.

The Browns were getting ready to leave for the New York area on Saturday when Goodson's test came back positive. After the league reviewed video inside the facility, the receivers were ruled out as close contacts; the group had gathered in the tub recovery area — a lapse in virus guidelines.

Cleveland also has an unidentified assistant coach who tested positive this week.

The circumstances could have rocked the Browns, but Stefanski stayed calm amid the chaos.

“He never wavers," offensive coordinator Alex Van Pelt said. "We do not use excuses at all. To a man, that is the message that gets reflected to the team every day. There is no excuse. Whatever it is, it is, and we will have to adapt and adjust to it and make it work.

“At the end of the day, nobody really cares. Pittsburgh could not care less whether we are in the building or not, and that is the reality of the NFL. Too bad for us, but we have to find a way to get it done, and we will get that done.”