In the bubble, the Phoenix Suns have been perfect so far 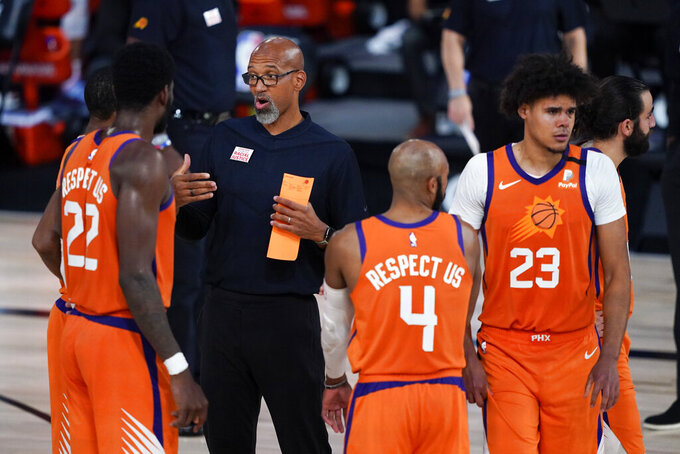 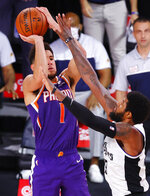 LAKE BUENA VISTA, Fla. (AP) — The last time Devin Booker walked off the court as a winner in four consecutive games, these were the opponents: Hampton, Cincinnati, West Virginia and Notre Dame.

That is, until now.

Booker and the Phoenix Suns — the team that came to the NBA restart at Walt Disney World with the worst record in the Western Conference and the second-worst record of the 22 teams in the field — are perhaps the best story of the bubble.

They’re 4-0 at Disney, breathing real life into playoff hopes that basically were nonexistent when the season was suspended because of the coronavirus pandemic on March 11. It’s the team’s first four-game winning streak since December 2018; Booker missed one of those games, so it’s his first run of four wins in a row since helping Kentucky make its Final Four run in 2015.

“It definitely feels like a tournament, a big AAU tournament, the March Madness tournament,” Phoenix’s Cameron Payne said Friday. “That’s something I never even got a chance to be in, but hey, I’ll take this.”

The Suns started their bubble run with a win over Washington and followed that with victories against three playoff-bound teams — first Dallas, then the Los Angeles Clippers (both of those games being 117-115 finals, the win over the Clippers sealed by a Booker buzzer-beater) and next a 114-99 victory Thursday over Indiana.

The Suns are riding a 10-year playoff drought, the second-longest current one in the NBA, but now they're thinking big and for good reason.

“Well, you know, this is in the fledgling stages, for sure,” Suns coach Monty Williams said. “We’ve got a lot more work to do. And there’s a process that we’ve kind of gotten ourselves involved in and we’re going to stick to that. So, fun? I don’t have time to have fun right now. It’s always good to win, but I’m working right now. And I want guys to understand, it’s fun when you win — but then you’ve got to turn the page and get right back to work.”

Williams understands the reality for the Suns right now. They entered Friday 1-1/2 games out of ninth place and the play-in series that will decide the last postseason berth in the West. And while the 4-0 start has been noteworthy, even an 8-0 mark in the seeding games wouldn’t guarantee the Suns a trip to that play-in round.

The Suns play Miami on Saturday, then finish the regular season against Oklahoma City, Philadelphia and Dallas.

“I’ve been in five years now and haven’t had that much success,” Booker said. “But, you know, I’m working hard every day to turn that narrative and change that narrative. We have a good bunch in here to do it. A lot of young players mixed with some veteran presence and it’s a good look for us. So, we’re going to keep our head down, keep working.

“I don’t think anybody here is worried about 4-0. We still have plans and goals for this team to reach and 4-0 wasn’t it.”

Booker is averaging 28 points in the four games. Deandre Ayton, another big piece of the young Suns’ core, is averaging 18.3 points and 9.3 rebounds. There are six players averaging double figures in all, including Payne, who is shooting 53% from 3-point range in his first four games with the Suns.

“We definitely feel good,” Payne said. “We’re not here for no reason.”