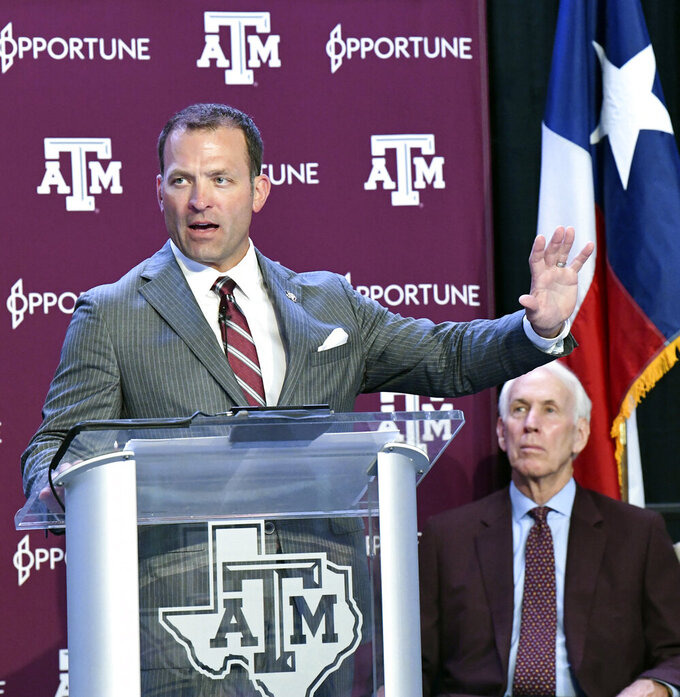 FILE - In this June 3, 2019, file photo, Texas A&M athletic director Ross Bjork, left, addresses media and A&M athletic staff in the Hall of Champions in College Station, Texas, as interim athletic director R.C. Slocum, right, looks on. The scheduled start of college football season is fewer than three months away, and there are plenty of reasons to be hopeful that games will be played Labor Day weekend. Texas A&M athletic director Ross Bjork said the school has conducted just under 500 COVID-19 tests on coaches, staff and athletes since May 18. The Pac-12 is the only major college football conference in which all the members have agreed to test all returning athletes for COVID-19. (Dave McDermand/College Station Eagle via AP, File)

College football is scheduled to kick off in less than three months and there are plenty of reasons to be hopeful that games will be played Labor Day weekend.

Universities across the country are taking the first cautious, detailed steps toward playing football in a pandemic, attempting to build COVID-19-free bubbles around their teams as players begin voluntary workouts.

“I think the start of the race has a lot to do with how you finish it,” Baylor athletic director Mack Rhoades said.

Thousands of athletes will be tested for COVID-19, though not all. Masks will need to be worn — most of the time. Some schools will have players pumping iron this week. Others are waiting a few more weeks.

“There’s an element of this that’s kind of like building an airplane as you fly it in that we’re learning so much more really every week,” Notre Dame football team Dr. Matt Leiszler said. "But it’s a moving target at times.”

For months, health officials including the NCAA's chief medical officer have said widespread and efficient COVID-19 testing is pivotal to bringing back sports. Now that exists, and at many schools every player will be tested before they are permitted to enter a team facility.

Texas A&M athletic director Ross Bjork said the school has conducted just under 500 tests on coaches, staff and athletes since May 18. The Pac-12 is the only major college football conference in which all the members have agreed to test all returning athletes for COVID-19.

Athletes testing positive for the disease have already been reported at Arkansas State, Marshall and Oklahoma State and elsewhere.

Expect that list to grow, and there is no standardized protocol for testing under the most recent NCAA guidelines, which is why plans are different from school to school. Missouri initially announced it would not test all athletes for COVID-19, then said it would. Michigan State will give its athletes two PRC tests (often done with a nasal swab), with a seven-day quarantine in between, before they cause use team facilities. Tulane will be giving every football player PRC and antibody tests.

Defending national champion LSU is testing each athlete for coronavirus antibodies upon arrival to campus; some will also get a PCR test to check for an active infection. A positive antibody test at LSU will trigger a PCR test and a positive PCR test means that player will have to isolate for a period of time.

Shelly Mullenix, LSU senior associate athletic director and director of wellness, said some players who test positive for antibodies but negative for active infection will also be isolated depending on symptoms or risk of previous exposure. All players were prescribed a seven-day “quasi-quarantine,” Mullenix said, after receiving their antibody tests.

Having players return to campus infected is worrisome but inevitable. The protocols being put in place are designed to catch and address that. The real challenge is keeping the players from getting infected after they return.

At Notre Dame, football players will be housed in single rooms at the on-campus Morris Inn hotel. They will face temperature screens and a health questionnaire every time they want to enter a facility to work out.

Notre Dame is planning to structure workout groups by academic schedules. Other schools are using a mix of factors such as keeping friends, roommates or position groups together.

“But you also have to think about things like, do you want all of your quarterbacks with the same group?” Wake Forest athletic director John Currie said.

As the small groups avoid infection they can be merged to form bigger groups.

While the workouts are voluntary, athletic staffers will be setting up strict schedules and moving equipment to allow for appropriate social-distancing. Masks will be required at times, though not necessarily when they work out. Bjork said Texas A&M will clean workout rooms after use, though the locker rooms at many schools will remain closed.

Southeastern Conference schools agreed to allow voluntary workouts starting Monday. The Big 12 and Pac-12 have set June 15 as their opening date. Other conferences, such as the Big Ten and Atlantic Coast Conference, are letting schools figure out what's best for themselves. Ohio State and Iowa in the Big Ten started voluntary workouts Monday, along with Louisville in the ACC.

Oklahoma from the Big 12 is waiting until July 1, sticking with a plan it was working on before the NCAA last month cleared the way for voluntary workouts starting June 1. The Sooners didn't see benefits in rushing but others decided the sooner the better.

“We wanted to actually go as early as we could because if we did have a problem, then you could you could actually manage it in with a lot more time,” Bjork said.

Schools hope to transition to required team activities in mid-July. A copy of the the Football Oversight Committee’s six-week plan includes a typical four-week preseason practice schedule preceded by two weeks during which teams can do up 20 hours per week of weight training, conditioning, film study, meetings and walk-throughs with coaches.

Players would not be permitted to wear helmets and pads during walk-throughs, but a ball could be used for instruction. The plan, which still needs to be approved by the Division I Council, was obtained Monday by The Associated Press and first reported by Sports Illustrated.

Of course, there is only so much schools can do to manage 18- to 22-year-old football players.

“What you worry about ism this is two hours a day, right?” Rhoades said. “And so what are student athletes, what are young men as it pertains to football, doing the other 22 hours?”

The message coaches, administrators and medical staff are trying to get across to their players is their behavior is an important as testing, screening and disinfecting. Limit the exposure to people outside the team bubble. That night out at the bar or the weekend trip to the beach could lead to an infection that sets back the whole team — or something worse.

“What we’re trying to impress upon them," Stewart said, "is that if this season is important to you, then you have to do things different this year than you have done ever before and maybe even ever again.”