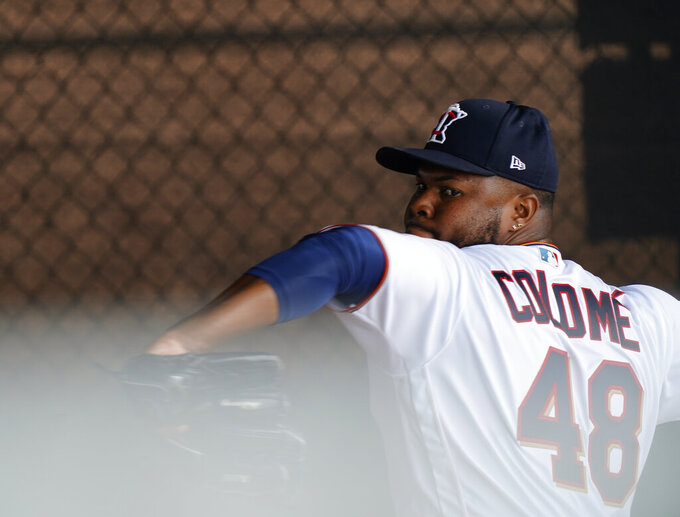 MINNEAPOLIS (AP) — The Minnesota Twins bolstered their bullpen this winter by signing two pitchers with ninth-inning experience, including the most recent closer for their primary division rival.

Adding Hansel Robles and Alex Colomé doesn't mean the Twins have demoted Taylor Rogers, though, despite a rough 2020 that was his worst of five seasons in the majors. They won't designate one reliever for a permanent ninth-inning role, in keeping with their practice over manager Rocco Baldelli's first two years. They're also confident the struggles Rogers endured last season were more statistical fluke than warning sign.

“We didn't think Taylor had a bad season. That's baseball, man,” pitching coach Wes Johnson said. "He got dinked and ducked a couple of times.”

The 60-game schedule, shortened by the virus outbreak, left no margin for slumps for any player. In 2019, Rogers had a 2.61 ERA with 90 strikeouts and only 11 walks in 69 innings while compiling 30 saves, but even that summer wasn't without lulls.

In 2020, the left-hander posted a 4.05 ERA in 21 appearances with the highest walks-and-hits-per-inning rate (1.5) of his career, but his opponents batted .400 on balls in play, the best proof of bad luck available in the sport's vast troves of data. The major league average was .298.

This spring, Rogers arrived at camp far more relaxed, regaling coaches and teammates with jokes and relieved that the surprise stress of serving as team union rep during the height of pandemic uncertainty has subsided.

“It really did take a toll on me. Not going to lie. It was a lot,” Rogers said, adding: “Everybody had a different situation, and just trying to take care of everybody’s individual situation was interesting. For myself, I was alone all season, and that’s not easy either. Everybody’s getting to see their families and all that type of stuff, but I don’t have one.”

The Twins weren't oblivious to his burden.

“He certainly had to deal with a lot of different things. I don’t think anyone could deal with it as well as he did,” Baldelli said.

Adding Robles and Colomé to the bullpen sure won't hurt. Robles came from the Los Angeles Angels, having served as their primary closer in 2019. Colomé has been a ninth-inning man for five years, leading the league in 2017 with 47 saves for the Tampa Bay Rays and posting an 0.81 ERA for the Chicago White Sox last season.

Sergio Romo, Tyler Clippard and Trevor May departed as free agents, but Tyler Duffey has returned to form a formidable late-inning quartet with Rogers, Colomé and Robles.

“With us, it’s become, ‘Get your outs and contribute,’ and then that’s all that matters,” said Duffey, who had a career-best 1.88 ERA in 22 games in 2020. “Obviously guys want to be closers and guys want to be setup men and all the names, but at the end of the day if we’re winning, everything else will take care of itself.”

Colomé threw a live batting practice session Wednesday at the team's complex in Fort Myers, Florida, prompting praise from Baldelli. He said Colomé “exudes confidence” on the mound, which is always at the top of the list of prerequisites for late-inning relievers.

“Coming to a team that works differently than other places, I don’t have that in my mind that I have to be the closer or not,” Colomé said. “I’m just trying to help the team win, and this is a good team and this is a good place to be.”