Bully, or just Queens tough? Criticism piles up for Cuomo 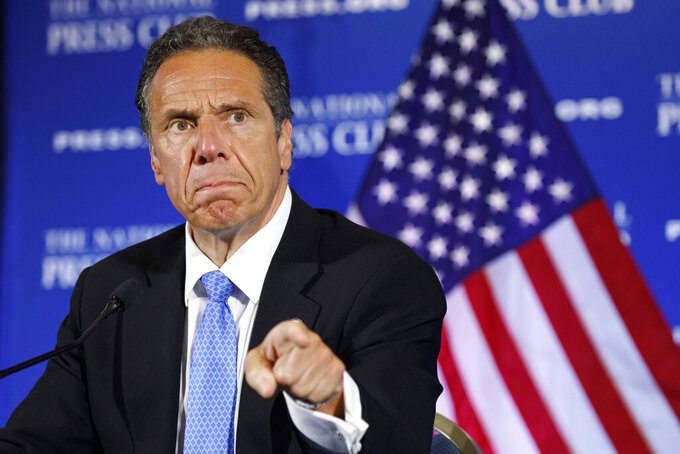 FILE - In this Wednesday, May 27, 2020, file photo, New York Gov. Andrew Cuomo speaks during a news conference, at the National Press Club in Washington. Over his long career, Gov. Cuomo has been known as a brutal political opponent to people who oppose his agenda or challenge him publicly. That penchant for punching hard at perceived enemies drew fresh condemnations this week in the wake of a tirade against a lawmaker who questioned his handling of the coronavirus pandemic. (AP Photo/Jacquelyn Martin, File)

ALBANY, N.Y. (AP) — Over his long career, New York Gov. Andrew Cuomo has been known as a brutal, even vindictive political opponent, quick to retaliate against people who oppose his agenda or challenge him publicly.

Tough tactics — even against fellow Democrats — brought him to the pinnacle of power in New York. But Cuomo's penchant for punching hard at perceived enemies drew fresh condemnations this week in the wake of a tirade against a lawmaker who questioned his handling of the coronavirus pandemic.

Assembly member Ron Kim told reporters Wednesday that when Cuomo called him Feb. 11 to complain about a quote he'd given to the New York Post, the conversation devolved into a stream of threats.

Kim said Cuomo yelled at him and threatened to “destroy” him if he didn’t get the paper to retract a statement in which he said the administration admitted it was withholding data about deaths in nursing homes because it was "trying to dodge having any incriminating evidence” that might get it in trouble with the U.S. Justice Department.

Days later, Cuomo appeared to follow through, castigating Kim during a conference call with reporters as chronically unethical.

Cuomo's staff strongly denied that a threat to “destroy” Kim was made. His spokesperson, who was listening to the Feb. 11 call, called Kim a habitual liar, and said the governor was just trying to defend himself against a false accusation of a cover up.

But Kim's story prompted sympathy from other Democrats who said that they, too, had been on the receiving end of similar blasts from Cuomo.

“Many times,” said New York City Mayor Bill de Blasio, whose punching-bag relationship with the governor has been a running story in state politics.

“I don’t think it’s just government,” de Blasio added. “A number of your colleagues in the media will tell you about calls where they were berated and belittled. It’s something that a lot of people in New York state have known about for a long time. I can’t get into the why. That’s a deeper question, I can only say it’s a very unfortunate way to treat people.”

Cuomo has never been shy about his aggressive approach, which has earned him monikers like the “Prince of Darkness" from observers. He had gained a reputation as a political enforcer by age 25 while working for the campaign of his late father Gov. Mario Cuomo.

Cuomo has long defended his hard-edged strategy as effective politics, while saying his true strength comes from consensus building, not instilling fear.

“This is a governor who works night and day to move the ball down the field for New Yorkers and they know that, which is why he has been elected and re-elected three times over the last 10 years," his senior advisor, Rich Azzopardi, said in a statement.

Questions of effectiveness aside, "people who know Albany know the governor rules with an iron fist,” Fordham University political science professor Christina Greer said. “A part of that is making sure that people very rarely speak up publicly against him. Private conversations are a different story. Very rarely do members of his own party speak out again the governor, because they know that retaliation will be imminent.”

Heastie said in a statement that “everyone involved needs to lower the temperature.”

Stewart-Cousins has backed a bill that would restrict Cuomo's emergency power to issue sweeping mandates during the coronavirus pandemic, pushed by lawmakers irritated about being cut out of key decisions.

But a vocal crop of Democrats are calling for Cuomo’s behavior to change, saying he relies too often on threats of ruining political careers to score wins.

“I think it’s quite clear that there is an appetite for accountability,” Queens Assembly member Zohran Mamdani said. “And for far too long the governor has considered himself above that.”

Sen. Alessandra Biaggi — who's also criticized Cuomo's pandemic response — said she’s been subjected to the governor's pressure tactics, too, although she said she never experienced anything like the call Kim described.

“They have said things to me and sent ominous messages to me and the governor himself has made threatening remarks to me,” said Biaggi, whose district includes Bronx and Westchester.

Cuomo's most high-profile feud — with de Blasio — has at times seemed to be a stumbling block in the state's pandemic response. On repeat occasions he has derided ideas and reversed policy decisions made by de Blasio, saying such decisions could only be made by the state.

Many trace the bad blood between the two politicians to a 2015 interview, where de Blasio publicly complained that Cuomo was a bully.

“If someone disagrees with him openly, some kind of revenge or vendetta follows,” the mayor said.

Nearly six years later, the state is still waiting for a reconciliation.