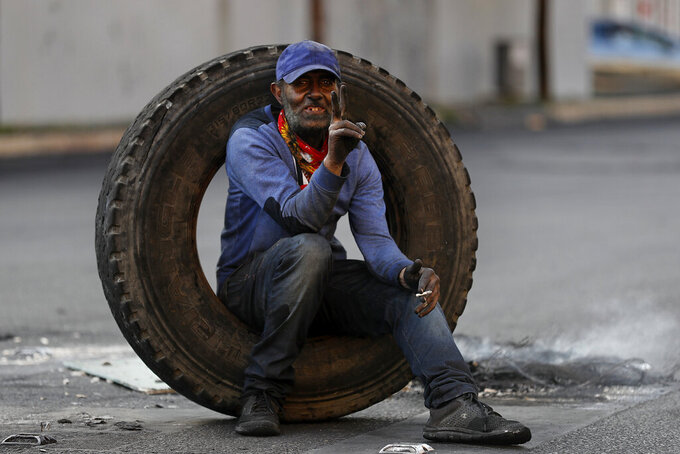 FILE - In this March 8, 2021 file photo, a protester flashes a victory sign as he aims to block a road during a protest, in Beirut, Lebanon. It's an expression of anger but also of helplessness: Dense palls of smoke rising around Beirut and other parts of Lebanon from burning tires that anti-government protesters are using to block roads. The tactic has become the hallmark of a new flare-up of demonstrations against an intransigent political class that does nothing as its country slides toward the political and economic abyss. (AP Photo/Hussein Malla, File)

BEIRUT (AP) — It’s an expression of anger but also of helplessness: Anti-government protesters in Lebanon are burning tires to block key roads, releasing dense palls of smoke that rise above the capital of Beirut and other parts of the country.

The tactic has become the hallmark of a new flare-up of demonstrations against an intransigent political class that appears to do little as Lebanon slides toward political and economic abyss. The country is mired in the worst economic crisis in its modern history, and the situation has been exacerbated by pandemic restrictions and an overwhelmed health care sector.

“The fire releases our anger. It quiets our hearts,” said Mounir Hujairi, a 23-year-old protester from Baalbek in northeastern Lebanon, who juggles his time between low-paying day jobs and protests.

The tire soot and smoke blacken the faces of protesters in anti-virus masks at makeshift roadblocks that cut off traffic around Beirut and between cities. The persistence of the protesters and the daily burning of tires underscore how intractable the country's problems have become.

Anti-government rallies first began gripping Lebanon in late 2019. Since then, the local currency has collapsed, after being pegged to the dollar for nearly 30 years. Salaries have remained the same as inflation skyrocketed. People lost their jobs and poverty affected nearly 50% of the population.

Meanwhile, Lebanon’s sectarian-based political system is stuck. Politicians have refused to compromise on forming a government or on making difficult financial decisions for fear of losing their clout or support base.

Exhausted, scared and restricted by the coronavirus, Lebanese have watched as members of the ruling elite blame each other for the crisis.

Last week, the currency hit a record low, trading on the black market at 11,000 Lebanese pounds to the dollar, down from the official 1,500 pounds for $1 — sparking a new wave of protests.

“The solution will only come through the streets,” said Hujairi, who has taken part in protests since October 2019. “Of course, those whose streets — or the streets of their political parties — are blocked will be angered.”

The roadblocks are a desperate way to reclaim the anger felt nationwide in 2019, when the government was forced to resign, sparking a brief period of euphoria and hope that change may be possible.

The national mood is now more fearful. Officials have warned of chaos and some have argued the protests were manipulated by political groups to ignite violence or extract concessions from rivals.

Many fear the social tension has reached levels not seen since before the civil war broke out in April 1975. For the next 15 years of conflict, burning tires became common — a cheap way to set up roadblocks between warring factions.

Tire fires are hard to put out and can go on for hours, drawing attention and keeping rivals away.

The tactic has been used in the Palestinian territories, Iraq and Sudan.

Palestinians burned tires during protests against Israeli occupation, starting in their first uprising that erupted in 1987. Three decades later, during protests against an Israeli-Egyptian border blockade of the Gaza Strip, young men formed “tire crews” that drove around the small coastal territory in motorcycle rickshaws to collect tires for burning. The dark black smoke served to obscure the identities of those throwing stones at Israeli forces.

Open tire fires, which were used in some countries to power kilns, have been outlawed in most of the world because of their high emission of pollutants.

Sahar Mandour, a Lebanon researcher with Amnesty International, said the practice of burning tires as a form of protest picked up in many countries in the 1980s. But it has since fallen out of favor because of the environmental impact.

“The world moved on. ... But Lebanon didn't,” she said. “We have the same parties and the same leaders, so the tools are the same.”

Hujairi claims he and his friends burn between 100 and 150 tires a day. He said they collect used and punctured tires from refuse piles, dismissing claims that political parties hand them out.

“A little black smoke won’t hurt,” Hujairi said, in response to criticism. “There is no way for us to reach the houses of politicians.”

On Wednesday, Lebanese troops deployed to prevent protesters from setting up roadblocks, two days after the president, Michel Aoun, called for action to prevent them.