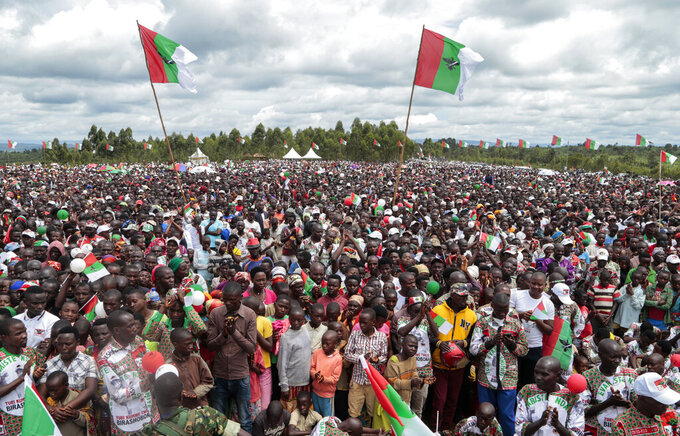 In this photo taken Monday, April 27, 2020, crowds of supporters of the ruling party gather for the start of the election campaign, in Bugendana, Gitega province, Burundi. Burundi is kicking out the World Health Organization's top official in the country Walter Kazadi Mulombo and three experts, saying they must leave by Friday, May 15, 2020, just days before the presidential election and after the WHO raised concerns about crowded political rallies which health officials say risk facilitating the spread of the coronavirus. (AP Photo/Berthier Mugiraneza)

KAMPALA, Uganda (AP) — Burundi is pushing ahead with an election on Wednesday that will end the president's divisive and bloody 15-year rule.

When President Pierre Nkurunziza hands over power, it could be the first truly peaceful transfer of authority in the East African nation since independence in 1962.

But the coronavirus poses a threat to the May 20 vote. Burundi has kicked out World Health Organization workers after concerns were raised. The WHO Africa director messaged the Africa Centers for Disease Control and Prevention chief about political rallies the day that Burundi's campaigning launched and images of crowds circulated online.

Authorities have been accused by critics of downplaying the pandemic and citing divine protection. But the government appears to be using virus measures to limit election observers, warning the East African regional bloc on May 8 that arriving foreigners face a 14-day quarantine.

More than the virus, however, it's the fear of violence that weighs on many of the more than 5 million people eligible to vote.

Government agents have been accused of harassing the main opposition party, the CNL, whose leader Agathon Rwasa is believed to be in a close race with Nkurunziza's chosen successor in the ruling CNDD-FDD, Evariste Ndayishimiye.

More than 145 CNL members have been arrested since campaigning began on April 27, according to SOS Medias Burundi, a group of independent journalists. Police spokesman Pierre Nkurikiye has accused Rwasa of making “incendiary and defamatory” remarks and inciting revolt.

Rwasa, the deputy parliament speaker, has drawn large crowds despite the risks of openly supporting him, according to an online group of activists known as i-Burundi.

The group worries that a rigged election could spark the kind of street demonstrations that marked the previous vote in 2015.

“The ruling party was hoping to use this post-Nkurunziza election to gain a semblance of legitimacy, but given what’s happening we might end up with more violence,” i-Burundi said in an interview. “People want change. ... But the ruling party has the incumbent advantage and controls the electoral process.”

Rwasa told The Associated Press he feels it's important not to boycott the election even if the outcome is not expected to be fair.

“Everything has its right time," he said. “Right now, it is not the time to give up and abandon our people."

Ndayishimiye, a retired general, would be a weak president because he will be a front for Nkurunziza and other powerful ruling party members, said David Gakunzi, a Burundian political analyst: “He consults but he will fear to take independent decisions.”

Ndayishimiye fought alongside Nkurunziza as a rebel in the civil war from 1993 to 2005 that killed about 300,000 people. Nkurunziza was chosen by lawmakers to be president during the peace process known as the Arusha Accords, which specified that a president's term can be renewed only once.

But Nkurunziza, who won a second term in 2010, said he was eligible for a third term in 2015 because he had not been chosen the first time by universal suffrage.

The deadly turmoil that followed badly damaged ties with the international community, and Burundi became the first country to leave the International Criminal Court after it started investigating allegations of abuses. The U.N. human rights office reported more than 300 extrajudicial killings and was kicked out of the country.

Nkurunziza survived a coup attempt shortly after the 2015 vote while traveling in Tanzania and has left Burundi only once since then. Meanwhile international donors have cut support, leaving the government struggling. It has ordered citizens to pay for the upcoming vote.

Many Burundians were surprised when the president announced in 2018 that he was serving his last term. Skepticism persists. The government has approved legislation that bestows upon Nkurunziza the title of “paramount leader” after he steps down.

“It’s hard to know what’s going to happen ... Nkurunziza has a track record of being quite unpredictable," said researcher Lane Hartill of the Burundi Human Rights Initiative. "Both the ruling party and the main opposition party, the CNL, are convinced their candidates are going to win the presidential election. It’s telling, though, that government officials continue to arrest large numbers of CNL members.”

Even some senior members of the ruling party are tired of rights violations and the cratering economy but are afraid to speak out for fear of losing their jobs or being killed, Hartill said.

Burundi's government has denied allegations it targets its people, calling them malicious propaganda by dissidents.

Memories of the 2015 violence are still raw. Jean Baptiste Bakunzi said he remains traumatized by his brother's death at the hands of the police and the Imbonerakure, a militarized youth group associated with the ruling party. His brother, accused of participating in anti-government activities, “knelt down and begged them to save his life," Bakunzi said.

"Instead, one policeman pulled the trigger and shot him dead,” he said. “Whoever opposes the ruling party becomes an enemy even today.”

The violence has dimmed hopes for those outside Burundi who will not be able to vote. Over 330,000 refugees are sheltering in Tanzania, Uganda, Rwanda and Congo, according to U.N. figures.

“These elections will not bring hope for us because we have lost so much," said Solange Teta, a refugee in Rwanda. “The ruling party candidate cannot alleviate our suffering."

Charles Nditije, a former government minister who lives in exile, described the election as a “joke,” calling the polls a formality aimed at installing Nkurunziza's chosen successor.

“What Burundians want now is anything that can bring to (an) end the reign of CNDD-FDD. But the ruling (party) candidate will fight tooth and nail to win fraudulently and set another round of crisis,” he said.

Hartill, the Burundi researcher, said disputed election results could put the country back on edge. The big question, he said, is whether the opposition leader will “say enough is enough.”