Business as usual for high court, despite riot, impeachment 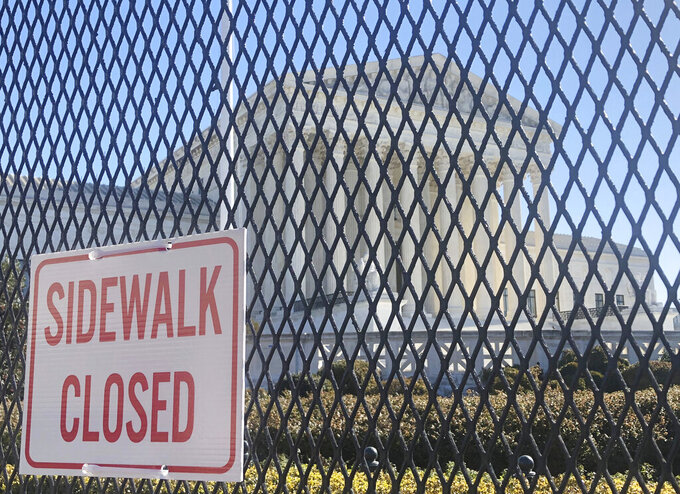 Anti-scaling fencing has been placed in front of the Supreme Court, which stands across the street from the U.S. Capitol, Sunday, Jan. 10, 2021, in Washington. (AP Photo/Alan Fram)

WASHINGTON (AP) — Amid insurrection and impeachment, the Supreme Court's big news Thursday was a decision in a bankruptcy case. Wednesday brought arguments over the Federal Trade Commission's ability to recapture ill-gotten gains.

At this fraught moment in U.S. history, the court is doing its best to keep its head down, going about its regular business and putting off as many politically charged issues as it can, including whether President Donald Trump's tax returns must be turned over to prosecutors in New York.

Still, the justices have not been able to completely avoid controversy in recent days. On Tuesday, the court's conservative majority that includes three Trump appointees cleared the way for the administration to execute a woman for the first time in 67 years and also allowed the administration to reinstate a requirement that pregnant women wanting an abortion pick up a pill in person from a medical facility, despite the risks of contracting COVID-19.

The court's work continues even though the coronavirus pandemic is preventing the justices from meeting in person, either for their private conferences or argument sessions. Chief Justice John Roberts has received both doses of the COVID-19 vaccine, but not every member of the court has, the court said.

The building itself has been closed to the public since March because of the pandemic. Since the weekend, it has been ringed by hard-to-climb fences that also surround the Capitol.

But arguments this week took place as if nothing out of the ordinary was happening, although the ability to listen live to the arguments is a product of the pandemic. Justices made pop culture references to Taylor Swift and the Netflix series “Dirty Money.”

They issued a unanimous decision in a bankruptcy case from Chicago, and they are convening again in private on Friday to discuss new cases to add to their docket.

The workmanlike approach is typical of the court, but it also aligns with the repeated efforts of Roberts to keep his court out of politics as much as possible, especially during Trump's presidency.

The justices largely avoided any election-related drama by declining to jump into any of the challenges brought by Trump and his allies, incurring Trump's wrath in the process.

The Supreme Court often hits pause on contentious issues when the White House is about to change parties. Pending appeals over restrictive Trump policies on immigrants and family planning services have been put on hold. The court has offered no explanation for the delay, but the incoming Biden administration is likely to chart a different course in both areas.

The justices also have repeatedly and without explanation put off acting on Mississippi's appeal of court rulings that struck down a state ban on abortion after the 15th week of pregnancy.

Abortion is one area in which people on both sides of the issue expect the court to uphold more restrictions and perhaps chip away at the constitutional right the justices declared nearly 50 years ago, especially since Justice Amy Coney Barrett took the seat of Justice Ruth Bader Ginsburg, who died in September.

Leah Litman, a University of Michigan law professor, wrote in Slate that the court's action Tuesday in reinstating the requirement that women pick up an abortion pill in person even during the pandemic signaled “that it is now ready and willing to uphold severe restrictions on abortion.”

Thomas Gloessner, president of a national group that represents more than 1,500 anti-abortion pregnancy centers, said, “We hope these federal regulations protecting women will remain in place and that this will be the first of many such rulings to come.”

The court's majority didn't explain its reasoning, and the new administration could act quickly to suspend the in-person requirement.

Tuesday's other orders allowed the execution of Lisa Montgomery to proceed. The court has shown no inclination to halt the federal executions, despite the objections of the liberal justices. And on capital punishment more generally, the court has been less willing to grant last-minute reprieves.

Two more executions of federal inmates are scheduled before the week ends, but President-elect Joe Biden has called for an end to the federal death penalty and probably won't seek to carry out any executions.