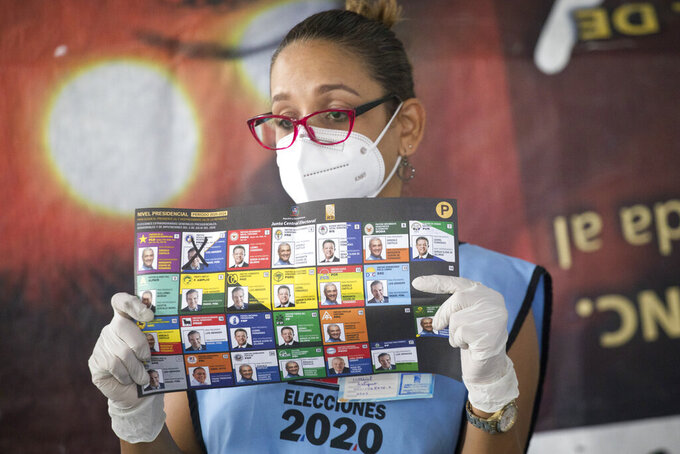 An electoral official wears a protective mask as a precaution against the spread of the new coronavirus, while counting ballots after polls closed during the presidential elections, in Santo Domingo, Dominican Republic, Sunday, July 5, 2020. (AP Photo/Tatiana Fernandez)

SANTO DOMINGO, Dominican Republic (AP) — A businessman who has never held elected office has won the presidency of the Dominican Republic, according to results Monday, ending a 16-year run in power by a center-left party.

Luis Rodolfo Abinader had won about 53 percent of Sunday's vote with most of the polling places reporting, topping Gonzalo Castillo of the Dominican Liberation Party, which has governed since 2004. Trailing far behind was three-time President Leonel Fernandez.

Castillo acknowledged “an irreversable tendency” in favor of Abinader and congratulated him, as did outgoing President Daniel Medina, who was barred by term limits from seeking a third four-year term.

The elections took place as the new coronavirus pandemic was sweeping across the Caribbean nation of some 10.5 million people. Abinader himself spent most of the past month in isolation after testing positive for COVID-19 and the vote itself had been postponed from May due to the disease.

The Health Ministry on Saturday reported the highest daily count of new confirmed COVID-19 cases, 1,241. The country has reported 794 deaths from the disease.

Voters were required to wear face masks and only one at a time was allowed into polling places, though those outside often appeared to ignore physical disancing recommendations.

Abinader, 52, is part of a family with extensive business holdings in the Dominican Republic, including hotels. While he has never held office, he finished second in the 2016 presidential election.

Results of voting for 190 congressional seats and 32 in the Senate were not immediately clear.

The campaign was notably low key, with none of the mass meetings and street caravans common in previous years.

On election day itself, at least one fatal altercation broke out with the polling place shooting of a worker for Albinader’s party. Authorities said two other people were wounded.