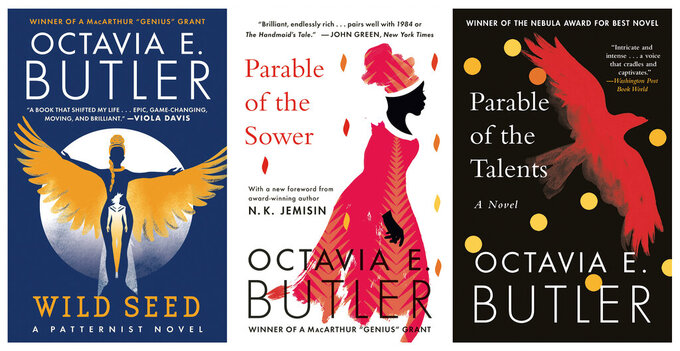 NEW YORK (AP) — Novelist N.K. Jemisin was a teenager the first time she read Octavia Butler, and nothing had prepared her for it. It was the 1980s, and the book was called “Dawn,” the story of a black woman who awakens 250 years after a nuclear holocaust.

“I remember just kind of being stunned that a black woman existed in the future, because science fiction had not done that before,” says Jemisin, whose “The City We Became” is currently a bestseller. “There was just this conspicuous absence where it seemed we all just vanished after a while.”

A revolutionary voice in her lifetime, Butler has only become more popular and influential since her death 14 years ago, at age 58. Her novels, including “Dawn,” “Kindred” and “Parable of the Sower,” sell more than 100,000 copies each year, according to her former literary agent and the manager of her estate, Merrilee Heifetz. Toshi Reagon has adapted “Parable of the Sower” into an opera, and Viola Davis and Ava DuVernay are among those working on streaming series based on her work. Grand Central Publishing is reissuing many of her novels this year and the Library of America welcomes her to the canon in 2021 with a volume of her fiction.

A generation of younger writers cite her as an influence, from Jemisin and Tochi Onyebuchi to Marlon James and Nnedi Okorafor, currently working on a screenplay for the Butler novel “Wild Seed” for the production company run by Davis and her husband, Julius Tennon. Davis, in a recent interview with The Associated Press, said she began reading Butler while attending the Juilliard school 30 years ago.

“I felt included in the narrative in a way I had never felt reading anything before,” said Davis, who has a deal with Amazon Studios. “There is something about seeing yourself in the imagination's playground that opens up your world.”

Alys Eve Weinbaum, a professor of English at the University of Washington, says Butler broke open a genre “dominated by white men and white readers.” She is now praised as a visionary who anticipated many of the issues in the news today, from the coronavirus to climate change to the election of President Donald Trump. In her 1998 novel “Parable of the Talents,” the right-wing Andrew Steele Jarret runs for president in 2032 with a message familiar to current readers.

“Jarret insists on being a throwback to some earlier, ‘simpler’ time. Now does not suit him. Religious tolerance does not suit him," Butler wrote. “There was never such a time in this country. But these days when more than half the people in the country can't read at all, history is just one more vast unknown to them.”

"She (Butler) seems to have seen the real future coming in a way few other writers did," says Gerry Caravan, an associate professor at Marquette University who is co-editing Butler's work for the Library of America. "It’s hard not to read the books and think ‘How did she know?’”

Butler's own life trained her to think in new ways. Born and raised in Pasadena, California, she was black, poor and stood 6-feet-tall. “I believed I was ugly and stupid, clumsy, and socially hopeless,” she once explained. Her feelings of isolation led her to the reading, and writing, of science fiction and fantasy stories even as an aunt told her, "Honey ... Negroes can’t be writers.”

At a writers workshop in the 1970s, Harlan Ellison read her work and became an early supporter, publishing one of her stories in a science fiction anthology. Her first novel, “Patternmaster,” came out in 1976, although it took her years to be able to support herself and for the industry to catch up to her. Jemisin and others remember that the original cover for “Dawn" featured a white woman, making Jemisin all the more surprised when she read the book and realized the protagonist was black.

Through the 1980s and '90s, her readership and reputation grew. She became the first science fiction author to receive a MacArthur “genius grant” and her literary honors included Nebula Awards for “Bloodchild” and “Parable of the Talents.” She was shy and often reclusive and would describe herself as “A pessimist if I’m not careful, a feminist, a Black, a former Baptist, an oil-and-water combination of ambition, laziness, insecurity, certainty, and drive.”

Some admirers have personal memories of Butler. Not longer before she died, in 2006, she was the keynote speaker at the Gwendolyn Brooks Conference on Black Literature and Creative Writing at Chicago State University. Okorafor was among hundreds in the audience. She had known Butler for years, dating back to a writers workshop where she first read Butler and sought her advice, beginning with a phone conversation.

“She was really kind and she was funny, and I just remember the conversation being really nurturing. She was very down to earth, but it was also like talking to someone who was way up there,” Okorafor says. "At the Gwendolyn Brooks conference, I remember how surprised she was at the turnout. The room is packed, this big room with so much love. I just wish she were here now to see how much more she is being honored.”

This story has been correct to show that the title of Butler's first book was “The Patternmaster,” not “The Patternist," and corrects the spelling of author's last name to Okorafor, not Okarafor.