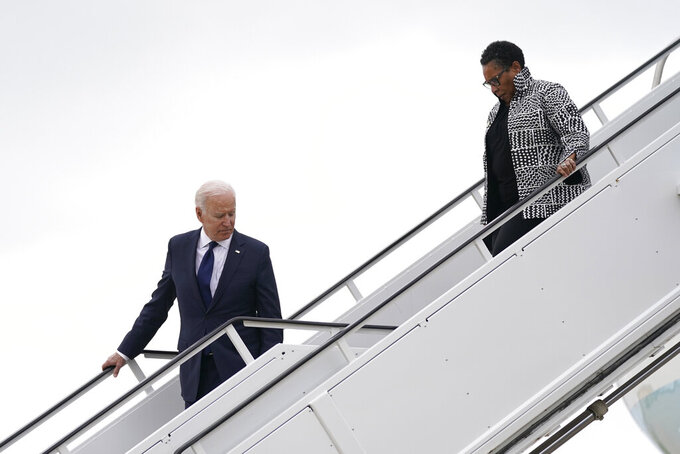 FILE - In this June 1, 2021, file photo President Joe Biden walks down the stairs of Air Force One with Housing and Urban Development Secretary Marcia Fudge as he arrives in Tulsa, Okla. (AP Photo/Evan Vucci, FIle)

WASHINGTON (AP) — Marty Walsh remembers what it was like when a Cabinet secretary would come to town.

“It really is a big deal. They give you the dates, and you just clear your schedule,” said Walsh, a former mayor of Boston.

He recalls 300 people packing into a room to hear Julián Castro, then Housing and Urban Development secretary. "He was speaking on behalf of President Obama and Vice President Biden, and people hung on every word.”

Now Walsh, as secretary of labor, is on the other side of the equation, crisscrossing the country on behalf of President Joe Biden’s American Jobs Plan. As the massive infrastructure package goes through torturous negotiations in Congress, Walsh and a handful of other Cabinet secretaries have launched an ambitious travel schedule to promote the plan and the larger Biden agenda.

“It’s clear the administration has decided to take their message on the road,” said Ravi Perry, head of the political science department at Howard University. “The amount of trips, how much they’ve traveled ... there really has been a shift.”

Starting around the beginning of May, Biden's Cabinet members have made dozens of TV appearances and trips around the country, promoting the Biden agenda with an ambitious roadshow.

“I don’t know that I can think of an equivalent to this kind of rollout,” said HUD Secretary Marcia Fudge, who in recent weeks has traveled to Newark, New Jersey; Kansas City, Missouri; and Tulsa, Oklahoma. “We are an extension of the administration. We are carrying the president’s agenda.”

That agenda stands at a critical crossroads as the infrastructure package faces a unified bloc of Senate Republicans, who decry it as excessive and unnecessary. Meanwhile some Senate Democrats remain leery of using their slight numbers advantage to force the package through without some bipartisan support.

Last week, Biden called off negotiations with a group of Republican senators and announced he would be formulating a new approach. The bill is Biden's top legislative priority and its fate could prove critical to his ability to maintain momentum early in his administration. With simmering issues such as voting rights reform, police brutality, immigration and gun control on the agenda, Biden's ability to deliver on his proposals is being closely watched by both Republicans and the Democrats' own restless progressive wing.

The Cabinet outreach campaign is particularly striking in the context of the country's gradual emergence from the COVID-19 pandemic. Although restrictions on mass gatherings are being lifted all around the country, several Cabinet secretaries noted that the national mood is not quite ready for large political rallies.

“You’re not getting the crowds, of course," said Walsh, who misses the intimacy of working lunches without social distancing restrictions. “It really restricts what you can do. You want to be around people.”

Buttigieg, who said he was “itching to get on the road since Day One,” said the presence of a Cabinet secretary brings particular gravitas. More than perhaps any position in government, he said, Cabinet secretaries are a direct extension of the president and his policies.

“You represent the administration and the president, writ large,” said Buttigieg, who has traveled to North Carolina, Georgia and Tennessee. "It’s a way to let people know that they’re important.”

A former mayor of South Bend, Indiana, Buttigieg recalled, “It was a pretty big deal if a regional administrator for a federal agency came to town, much less a Cabinet secretary.”

The campaign is proceeding with active coordination from the White House. Fudge said her department plans her travel schedule, but the White House regularly makes requests for her to appear in certain places or arranges for her to team up with another secretary for a joint appearance. Biden announced the informal Jobs Cabinet grouping in April, telling reporters that the quintet would be asked “to take special responsibility to explain the plan to the American public."

Anita Dunn, senior adviser to Biden, said the Cabinet members had largely been confined to long-distance television interviews for the first few months of the administration.

“It’s all been virtual until quite recently,” she said.

Dunn described the Cabinet members as "accomplished people who represent the administration and allow us to increase our reach.”

It also helps that several of the secretaries are former mayors, like Buttigieg and Walsh, or former governors like Granholm and Raimondo, enabling them to find easy common ground with local officials and stakeholders.

“That's a huge advantage for the administration,” Dunn said.

The logistics and cost of planning a secretary's visit are also far less daunting than they would be for the president or vice president. Dunn said the secretaries travel on a mixture of government planes and commercial airlines, and Cabinet secretaries have their own security details, but not Secret Service protections. As a result, the administration can get the impact of a direct presidential emissary for far less cost and hassle.

In some cases the secretary's role is to rally sympathy and momentum; in others they seek to reassure nervous audiences in deeply Republican states that the Biden agenda won't leave them behind.

Granholm, speaking on the phone during a visit to West Virginia, said her primary goal on that trip was to reassure citizens of the coal mining-dependent state that Biden's clean energy plans won't destroy their economy. A former governor of Michigan, Granholm compared West Virginia to her home state when the auto industry started contracting.

“I get that fear and nervousness when a state’s whole identity and economy is wrapped around a sector that’s shrinking. I get when a community has been on its knees,” she said.

Her presence in West Virginia “means that the president of the United States deeply cares," Granholm said.

The approach represents a direct departure from the previous administration. Former President Donald Trump's Cabinet secretaries did their share of pre-pandemic speaking engagements, but Trump generally preferred to be his own messenger and promoter through Twitter, interviews with sympathetic media outlets and famously raucous rallies with himself as the centerpiece.

“It's a huge shift in how Cabinet members are being used by the president,” Perry said. “What we’re seeing here is a much more decentralized executive branch. In some ways, it’s a return to normalcy in terms of domestic diplomacy.”