Caesars puts pandemic losses at $2B, wants insurers to pay 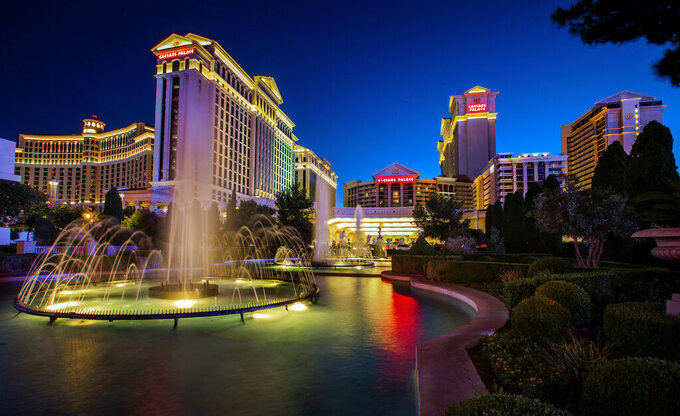 FILE - This June 23, 2019, file photo shows Caesars Palace in Las Vegas. Casino giant Caesars Entertainment is putting its losses due to the coronavirus pandemic in 2020 at more than $2 billion — and is suing a long list of insurance carriers it says are balking at paying its business interruption costs. (L.E. Baskow/Las Vegas Review-Journal via AP, File)

LAS VEGAS (AP) — Casino giant Caesars Entertainment Inc. is putting its losses because of the coronavirus pandemic in 2020 at more than $2 billion, and is suing a long list of insurance carriers it accuses of balking at paying its business interruption costs.

In a lawsuit in Nevada state court, Caesars names 60 insurers it says are rejecting its claims to recoup losses under about $3.4 billion in insurance policies it had for catastrophic business losses.

A Caesars spokeswoman, Chelsea Ryder, said Thursday the company had no additional comment about the lawsuit.

Representatives from most insurers did not immediately respond to email messages about the breach of contract and unfair claims practices case filed March 19 in Clark County District Court.

Robyn Ziegler, a spokeswoman for insurer Zurich NA, said it was not her company’s practice to comment on litigation.

Allianz Global Corporate & Specialty said it is evaluating claims from businesses around the world and will honor COVID-19-related claims “where they are part of our policies and cover is clear.”

“However, many businesses will not have purchased cover that will enable them to claim on their insurance for COVID-19 pandemic losses,” it said.

Its attorneys said in the civil complaint that it paid $25 million in premiums to companies ranging in name from Ace American Insurance to XL Insurance.

“Notably, insurers have made clear that they are not willing to underwrite the risks posed by a pandemic going forward,” the lawsuit said. “This new exclusionary language ... confirms that this risk was covered and not excluded in the all risk policies at issue in this suit.”

The lawsuit was first reported Monday by the Las Vegas Review-Journal, which noted it was not the first of its kind among Las Vegas casino operators.

Casinos were among many businesses ordered shut down last year as the coronavirus pandemic became known in Nevada and the other states where Caesars operates — Arizona, Colorado, Florida, Illinois, Indiana, Iowa, Louisiana, Maryland, Mississippi, Missouri, New Jersey, Ohio and Pennsylvania.

Caesars said in its lawsuit it furloughed many of its 79,000 employees but continued to pay them for up to six weeks and paid more than $16 million to employees who couldn't work because they or someone they came in contact with tested positive for the virus.

In a Security and Exchange Commission filing for the fiscal year ended Dec. 31, Caesars said the outbreak “impacted our operations and caused an economic downturn, widespread unemployment and an adverse impact on consumer sentiment.”

“We expect that COVID-19 will continue to have a material impact on our business, financial condition, liquidity, results of operations (including revenues and profitability) for an extended period of time,” it said.