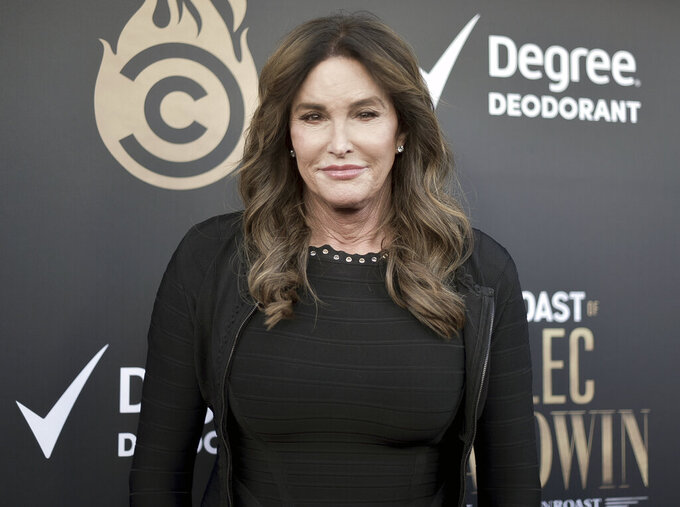 FILE - Caitlyn Jenner attends the Comedy Central Roast of Alec Baldwin in Beverly Hills, Calif. on Sept. 7, 2019. Jenner says she will run for governor of California. Jenner says in statement posted Friday, April 23, on Twitter that she has filed initial paperwork to run. Democratic Gov. Gavin Newsom is facing a likely recall election this year. (Photo by Richard Shotwell/Invision/AP, File)

LOS ANGELES (AP) — Caitlyn Jenner begins her campaign for California governor with a prized commodity for a candidate — celebrity. But while her name is widely recognized, what she would do in the job remains a mystery.

Nearly two decades ago, Hollywood fame helped elevate another Republican, Arnold Schwarzenegger, to the governor’s chair. But he had already made a name in state politics, working to enact hundreds of millions of dollars in funding for school programs. He once headed a fitness council for then-President George H.W. Bush, and was married to Maria Shriver from the Kennedy political dynasty.

Jenner lacks the roots Schwarzenegger had in politics, and his international celebrity far eclipsed her own. But her 3.5 million Twitter followers gives her a foothold to reach out directly to voters through social media, similar to the way Schwarzenegger could attract TV cameras from around the globe.

“It would be a mistake to view her of one of these ‘circus candidates,’ ” said Thad Kousser, a political science professor at the University of California, San Diego.

Newsom, a first-term Democrat, is facing a likely recall election this year, though officials still are reviewing petition signatures required to qualify the proposal for the ballot. County election officials are required to submit their final signature tallies to the state no later than next Thursday.

Jenner, who came out as a transgender woman in 2015, released a statement that sketched only a vague outline of what her agenda might look like. Cutting taxes. Repairing the economy. Fighting special interests and California's Democratic-dominated politics.

Still, with her name recognition and ability to attract publicity, she could overshadow other GOP contenders, including former San Diego Mayor Kevin Faulconer, former U.S. Rep. Doug Ose and businessman John Cox, who lost to Newsom in a landslide in the 2018 governor’s race.

“The politics of celebrity are going to enter in this in a big way, just like they did in 2003” when Schwarzenegger was elected, predicted David McCuan, chair of the political science department at California State University, Sonoma.

He noted that Jenner's website has links to purchase T-shirts, caps and coffee mugs, but no details on her policy positions.

“She’s remained silent on many of these issues, and she doesn’t have a record of political participation,” he added. Schwarzenegger “was political royalty. And he had a presence that was as large as the galaxy. And as a result, he upset the whole race” in 2003.

The emerging contest had failed to attract a nationally recognized contender before the entrance of the 71-year-old Jenner, who won the decathlon in the 1976 Summer Olympics and is widely known from the popular reality shows “Keeping Up with the Kardashians” and the spin-off, “I Am Cait.”

However, she is untested as a candidate and little is known about her positions on critical issues facing the state, from the coronavirus pandemic to managing the economy. She has ties to former President Donald Trump, who remains broadly unpopular in California outside his GOP base, as well as his former political operatives who are helping her organize her campaign.

Jenner credits herself with advancing the movement for equality. But the LGBTQ advocacy group Equality California said it would oppose her candidacy, citing her ties to Trump and Republicans who have sought to undercut transgender rights around the nation.

She also has faced speculation that she's entering politics to steer attention to her entertainment career. And California has a much stronger Democratic tilt than it did in Schwarzenegger's run in 2003 — registered Democratic voters outnumber Republicans in the state by nearly 2-to-1.

Hours after Jenner announced she would run, Faulconer took a lightly veiled swipe at her lack of experience in government.

Speaking with reporters in Huntington Beach, he described himself as “somebody who has won elections and knows how to get results."

Ose said he looked forward to debating their “ideas, positions and solutions.”

Newsom declined to comment directly on Jenner’s candidacy during an event marking the reopening of a section of Highway 1 in Big Sur. Instead, he pivoted to a rousing defense of his administration, highlighting the state’s progress on constructing roads and bridges, vaccinating Californians and building a budget surplus.

But a fundraising appeal from his campaign sent after Jenner's announcement warned that “we’re going to need help keeping up with Caitlyn’s personal wealth and ability to raise money from right-wing donors, now that she has Trump’s team with her.”

In a statement, Jenner called herself an outsider and the only candidate “who can put an end to Gavin Newsom's disastrous time as governor.”

It was notable that her announcement did not include a video, which is commonplace in political campaign kickoffs. Her campaign did not respond to a request for an on-camera interview.

If the recall qualifies as expected for the ballot this year, voters would be asked two questions. First, whether Newsom should be removed from office and second who should replace him.

If a majority says no to recalling Newsom, he stays in office and the votes for the replacements are irrelevant. But if a majority votes to remove him, then whoever among the candidates gets the most votes becomes California governor. With dozens of names expected on the ballot, a winner would likely get less than 50% of the votes.

The recall effort largely has been fueled by criticism of Newsom’s handling of the pandemic, which shuttered schools and closed thousands of businesses.

He has also been hit by the fallout from a multibillion-dollar fraud scandal at the state unemployment agency while weathering a public shaming for dining out with friends and lobbyists at an exclusive San Francisco Bay Area restaurant last fall, while telling state residents to stay home for safety. Photos showed Newsom without a mask.

However, recent polling has suggested Newsom would hold his seat, and the sour public mood could shift as coronavirus restrictions recede. California also is likely to be the recipient of billions of dollars of federal recovery funds, which Newsom will dispense and could use to his political advantage.

Jenner also could face questions about a 2015 fatal crash in which she rear-ended two cars. A 69-year-old woman was killed when her car was pushed into the path of an oncoming Hummer.