Caleb Followill on evolution of Kings of Leon on new record 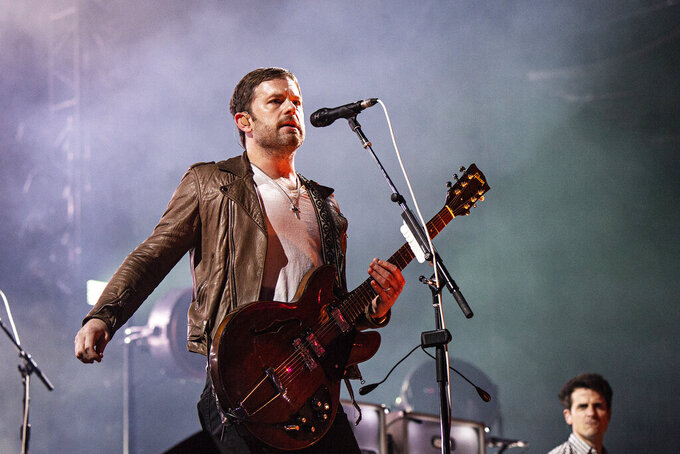 FILE - Caleb Followill of Kings of Leon performs during KAABOO 2019 in San Diego, Calif. on Sept. 13, 2019. The Nashville-based rockers Kings of Leon released their eighth studio album, “When You See Yourself” in January. (Photo by Amy Harris/Invision/AP, File)

NEW YORK (AP) — With the longest gap between album releases, the Nashville-based rockers Kings of Leon have returned with their eighth studio album, “When You See Yourself.”

Frontman Caleb Followill said the family-based band was firing on all cylinders in the studio. He points out “100,000 People” as one of the songs teased ahead of the new record.

“I feel like all the years of us working together came together on that song. It’s a great story. It has its little hook to it and everyone plays the right parts,” he said.

That would be his brothers Nathan and Jared, along with their paternal cousin Matthew.

The foursome finds themselves in pretty good company, the original lineup of the Beach Boys had the same core of brothers and a cousin. Followill feels honored by the comparison. But he doesn’t downplay the challenges of playing with close family.

“You really have to check your ego at the door, especially when you’re making music, because we don’t really have that buffering thing that we would if we were just friends,” Followill said.

But they’ve been playing together so long, “shooting from the hip” has become the norm for the guys, but that doesn’t mean they’re not competitive.

Recently, he spoke to The Associated Press about the new record, plans for a world tour and the decision to tease the album’s lead single, “The Bandit,” over social media.

AP: How did the choice to tease the record over Instagram evolve?

Followill: Our fans knew that we had been in the studio because we had kind of started teasing them from the studio. So, when everything did shut down, our fans were like, ’What the hell? We know you made some music. Why not now — more than ever — would you put it out because we’re all sitting at home and wanting it?'

AP: Was the writing based on real-world problems like the COVID-19 pandemic?

Followill: It was before the pandemic. But we weren’t without our problems, obviously. I try not to let too much of that stuff get into the music because I want the music to kind of be a fun escape or a sad moment you can enjoy. There are a lot of people out there that do it successfully and tackle the issues and do it well. I’ve never really tried to do that. And who knows? But, yeah, I try to keep out of it as much as I can.

AP: How did the band evolve with the new record?

Followill: As a band, we are at kind of a great moment right now. I feel like musically we’re all on the same page. We all wanted to be in there to work and it didn’t feel like it was a chore. I feel like that chemistry is something that we haven’t really felt since maybe the early days.

AP: This band has an interesting trajectory — a rock band from Nashville that gets hugely successful in Britain. What was that first performance like over there?

Followill: We were in the middle of recording our first album when we got the call that we had to go to London... We had only played a handful of shows in America, so we were very green. And when we did get to London, as soon as we landed, we got in the car and our song was on. It was like, ‘Whoa! Stop the car! We’re all going to dance around.’ And we got back in the car.

AP: And the performance?

Followill: The other bands on stage were seasoned. They were out there doing solos behind their heads and stuff. And we were all just scared to death. But, oddly enough, it seemed like everyone was there to see us. And we were playing later than all these bands that were so good. And I just told the boys, ‘Just play it as fast as you can, play it as loud as you can and let’s distract them, so they don’t they don’t notice that our skill level isn’t that great yet.’

AP: What was the underlying theme that makes this album stand out?

Followill: I think one of the things that’s really special is the fact that it was written before all of this and when you get into the lyrics, it seems very much like it was written about this time.

AP: With vaccinations ramping up, what are your plans for touring?

Followill: I feel like it’s moving quick. We we’re just now hearing that things are kind of starting to look like it’s a go. So, after spring break, I think we’ll all get in there and start getting the show together. And these songs lend themselves to be kind of beautiful. So, we’re going to try to put on a hell of a show.