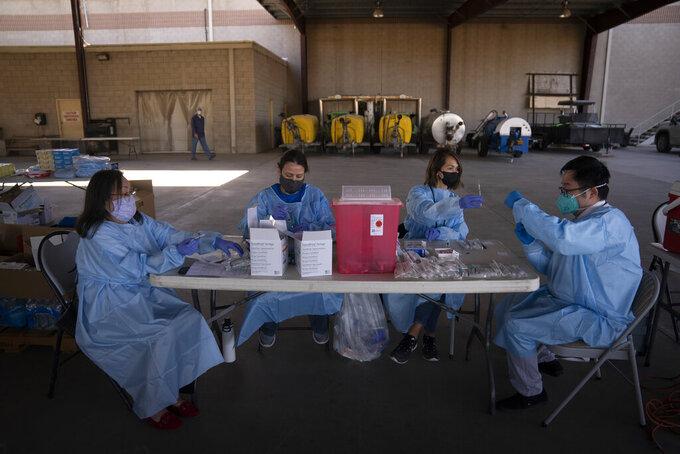 FILE - In this Jan. 21, 2021, file photo, health care workers prepare the Pfizer-BioNTech COVID-19 vaccine for farm workers at Tudor Ranch in Mecca, Calif. California Gov. Gavin Newsom wants to spend the state's extraordinary budget surplus on correcting the most widespread financial impacts of the pandemic, pledging to give $600 payments to most taxpaying adults while committing to pay off all of their outstanding rent and utility bills. But left out of the governor's $267.8 billion budget proposal last month: Money to rebuild local public health departments, whose staffing shortages and fragmented funding were exposed by the coronavirus, impeding a more coordinated response to the crisis. (AP Photo/Jae C. Hong, File)

SACRAMENTO, Calif. (AP) — California Gov. Gavin Newsom wants to spend the state's extraordinary budget surplus on correcting the most widespread financial impacts of the pandemic, pledging to give $600 payments to most taxpaying adults while committing to pay off all of their outstanding rent and utility bills.

But left out of the governor's $267.8 billion budget proposal last month: Money to rebuild local public health departments, whose staffing shortages and fragmented funding were exposed by the coronavirus, impeding a more coordinated response to the crisis.

Now public health departments are joining forces, trying to convince Newsom and the state Legislature to give them an unprecedented infusion of cash. Their campaign, dubbed “California Can’t Wait,” seeks $200 million per year that would let them hire more people.

“When things are going well in public health you often don’t hear about it,” said Michelle Gibbons, executive director of the County Health Executives Association of California. “COVID kind of highlighted a lot of the areas where public health has been decimated without having adequate staffing capacity.”

The state Legislature, dominated by Democrats, included more than $400 million for public health in its budget proposal, including the $200 million public health departments asked for plus another $115 million to address inequities in the public health system.

Lawmakers are expected to vote on their budget plan next week, but it won't become law unless they can reach an agreement with Newsom.

Newsom has not said why he did not include the money for public health departments, instead reiterating his support for health care in general — including spending $300 million on public hospitals and giving government-funded health insurance to some low-income adults living in the country illegally.

“I’ve not been shy in terms of my support to advance the cause of health care,” Newsom said.

Newsom's budget includes $3 million for a review to “assess the state's public health response,” adding his administration is “committed to turning lessons learned" into actionable policies next year.

But the decline stems from the state assuming full responsibility for indigent health care costs after the federal Affordable Care Act went into effect, said H.D. Palmer, spokesman for the California Department of Finance.

“That decision, which the Legislature approved, took these costs off of the counties' books,” Palmer said.

California has 61 local public health departments scattered across the state, employing hundreds of doctors and nurses whose job is to think about what makes people sick and how to keep that from happening.

These people battle viruses like Ebola and Zika, while working to contain small outbreaks of measles and other infectious diseases. That includes sexually transmitted diseases, tuberculosis, and even the plague — an ancient disease that once killed a third of the population of Europe during the Middle Ages that, nevertheless, popped up in an isolated case last year in South Lake Tahoe.

Their work is often so far removed from the public consciousness that they don't register in the public policy debates at the state capital. That changed last year, as terms such as “contact tracing” and “morbidity” entered the vernacular, changing the way people think and talk about public health.

Before the pandemic, Alameda County had just seven people whose job was “contact tracing,” or investigating how and where people contracted a dangerous disease so they can attempt to isolate it and keep it from spreading. That job became critical during the early days of the coronavirus pandemic.

“We could have been better prepared had we had more investment and infrastructure already in place with people trained to do this work with connections with the community to reach people that we need to reach," said Colleen Chawla, director of Alameda County's Health Care Services Agency. “It's not the kind of work that can happen overnight.”

Today, the agency has 140 contact tracers, a feat accomplished in part by moving people from other jobs. But when they did that, the county forfeited the grant money that funded those jobs, leaving a hole in their budget. That hole was filled with federal coronavirus aid money — money that won't be available in the future.

In 1991, the California Legislature shifted public health responsibilities to the counties. The state has been sending local governments money each year to do this, but that money has been declining in recent years.

Local public health departments also get federal money, but it comes with strict rules on how they can spend it. A county could use a federal grant to hire people, but only if they research a certain disease: For example, HIV, tuberculosis or tobacco-related illnesses.

“It’s difficult to coordinate kind of a broader approach when you are stuck in these buckets, like tobacco, STDs,” Gibbons said.

Negotiations between Newsom and lawmakers are ongoing. Chawla said many acknowledged the difficulty of responding to the coronavirus pandemic with limited resources. But she said there should not be any excuses for the next public health crisis.

“Who is going to be forgiving of us if we are in this position again?” she said.

This story has been corrected to say public health departments are asking for $200 million, not $400 million.