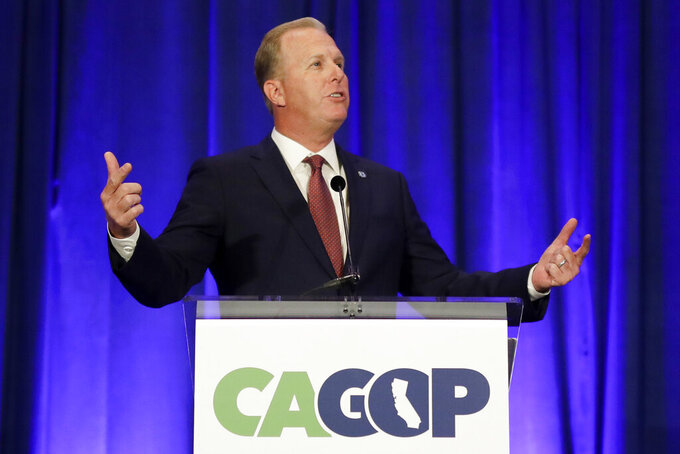 FILE - In this Sept. 7, 2019, file photo, San Diego Mayor Kevin Faulconer speaks during the California GOP fall convention in Indian Wells, Calif. California Democratic leaders are being criticized after attempting to link the insurrection at the U.S. Capitol with efforts to recall Democratic Gov. Gavin Newsom. The Republican Party of Orange County Wednesday, Jan. 13, 2021, launched a new round of fundraising appeals for the proposed recall. Among potential GOP candidates, Faulconer has established a committee to begin raising money. (AP Photo/Chris Carlson, File)

LOS ANGELES (AP) — California Republicans on Wednesday seized on a bungled Democratic attempt to link the proposed recall of Gov. Gavin Newsom to the insurrection at the U.S. Capitol, depicting it as a dangerous act of desperation by the Democrats and fresh evidence that the governor needs to go.

The criticism came as the Republican Party of Orange County launched a new round of fundraising appeals for the recall, saying Democrats were attempting to enflame political tensions at a time of national strife.

“There is nothing more democratic than an election,” the party said in a statement, defending the proposed recall that could take place later this year.

A day earlier, state Democratic Party Chair Rusty Hicks and a lineup of Democratic elected officials claimed the recall effort was a “coup” to remove Newsom, led by far-right extremists including white supremacists and neo-Nazis. However, they provided no evidence to support the allegations.

The scattershot of claims and inflammatory language even drew criticism from fellow Democrats.

In the twilight of President Donald Trump’s administration, and following his baseless claims of widespread election fraud, “We all have a responsibility to recommit to truth and facts,” said Roy Behr, a Democratic strategist who has worked for California politicians including former U.S. Sen. Barbara Boxer.

“While the other side has clearly shown that facts and reality are irrelevant to their arguments, I think that our side can be effective without having to resort to that,” Behr said. "There are so many good reasons to oppose the recall, they don’t need to resort to that particular line of argument."

Samantha Corbin, a Democrat and influential state government lobbyist, wrote on Twitter that she was “extremely disappointed and disturbed” to see the party using such language, especially at a time of national crisis and threats of violence, including at the Capitol in Sacramento.

“Linking a legal and constitutionally appropriate (California) recall attempt to the violent insurrection at the U.S. Capitol and ongoing coup attempt is worse than a bad PR call. It’s irresponsible, will breed division and perpetuates ignorance,” she wrote.

It appeared the Democrats were trying to piggyback on the nationwide attention on Washington, but the event also signaled the party was recognizing the recall as a legitimate — perhaps even inevitable — threat to the governor.

Recall organizers say they have collected more than 1.1 million of the nearly 1.5 million petition signatures needed to place the recall on the ballot, and they have until mid-March to hit the required threshold.

Newsom was elected in a landslide in the heavily Democratic state in 2018 but has seen his fortunes sour, as many residents grow weary of long-running coronavirus restrictions that have shuttered schools and business while he contends with fallout from a massive unemployment benefits fraud scandal.

He became the focus of public outrage after being caught dining with friends at an opulent restaurant — seated closely together and without masks — after telling state residents to spurn social gatherings and stay home to avoid risk of spreading the virus.

Unlike a coup, typically a violent and illegal attempt to seize power, recall elections are authorized under state law. Then-Democratic Gov. Gray Davis was ousted in a recall election in 2003 and replaced by Republican Arnold Schwarzenegger.

Claremont McKenna College political scientist Jack Pitney said Democrats were trying to put an extremist label on the recall at a time when the movement remains largely unknown to the state's nearly 40 million people. He noted that President Richard Nixon once wrote that the best way to fire up your supporters is to rally them against a visible opponent. He said a loyal supporter will fight hard for you but “he will fight twice as hard against your enemies.”

Democrats “were trying to identify that enemy,” Pitney said.

But it may go largely forgotten, with the nation’s attention focused on Washington and Trump's second impeachment. “To the extent that people were paying attention, it backfired,” he said.

Randy Economy, a senior adviser to the recall effort, expressed dismay at the allegations. He said traffic to the group’s website hit a record Tuesday, which he attributed to the Democratic event.

“They are going to go there?” he asked, referring to the allegations. “That’s how bad the Democratic Party is in California.”

The event also made clear that Democrats are concerned about a possible candidacy by former San Diego Mayor Kevin Faulconer, a moderate Republican with a low-key, avuncular style who came to power in 2013 after a sexual harassment scandal ended the term of his predecessor, Democrat Bob Filner. Faulconer was singled out for criticism by the Democrats.

Among potential GOP candidates, Faulconer has established a committee to begin raising money. Republican businessman John Cox, Newsom’s 2018 rival, has signaled he intends to run if the recall qualifies. Another name circulating in Republican circles is Trump’s former acting director of national intelligence, Richard Grenell, who lives in California. Grenell did not respond to an email seeking comment.