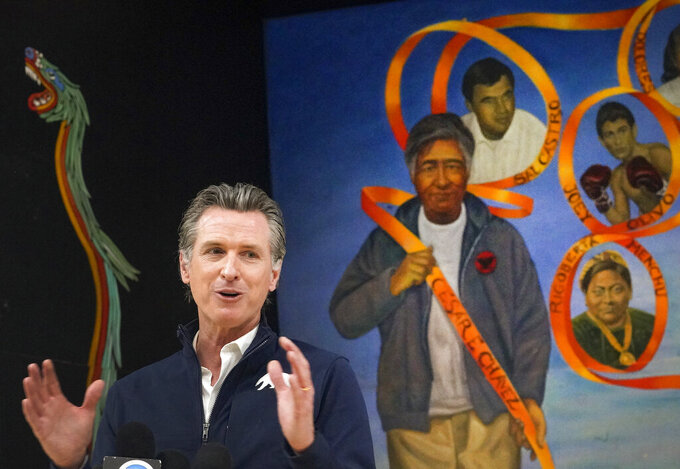 FILE - In this Sunday, Feb. 21, 2021, file photo, California Gov. Gavin Newsom takes questions from the media during a visit to a mobile vaccination site at Ramona Gardens Recreation Center in Los Angeles. Newsom and his Democratic allies launched a campaign committee Monday, March 15 to stop a proposed recall election that could oust him from office. (AP Photo/Damian Dovarganes, File)

LOS ANGELES (AP) — California Gov. Gavin Newsom established a political committee Monday to begin raising money to defend his seat in a potential recall election, the strongest acknowledgment to date that he expects to be on the ballot this year.

The Democrat’s new fundraising arm could soon send a powerful message to his possible rivals: Under state rules, Newsom alone is allowed to raise money in unlimited amounts, while other candidates must adhere to contribution limits.

The formation of the committee — called “Stop the Republican Recall" — came alongside a flood of messaging from Newsom and other prominent Democrats calling the campaign a Republican power grab driven by supporters of former President Donald Trump and extremist groups.

“We’re just concerned about violence moving into the future as we move farther and farther away from the January insurrection and we put down our guard. We must remain vigilant about these groups and how serious they are," Newsom said Monday night on MSNBC. “All you need is about a quarter of the people who supported Trump to just sign a petition and it appears they’ve done that.”

Organizers of the recall say they have collected over 2 million petition signatures to place the election on the ballot – about 1.5 million are needed for it to qualify, though hundreds of thousands must still be validated by election officials. They said 38% of petition signatures have come from independents and Democrats, but people are not required to list their party affiliation on the form.

Orrin Heatlie, a retired county sheriff's sergeant who filed the recall petition, said Newsom is engaging in a “smear campaign" about the recall organizers because he can't defend his record.

“This recall is driven by the people of California. It encompasses the entire political spectrum," he said, “all the way from the far liberal left to the alt-right."

Defeating the recall “will be one of the most important priorities for Democrats this year,” Booker said in a statement.

Lt. Gov. Eleni Kounalakis said Democrats must “reject the efforts of the Republican party to sow discord in our state and their longshot attempt to slip a Republican governor into the bluest state in the country."

Newsom for months sidestepped questions about the recall but has more recently started to ramp up his political operation and strategy. He’s been traveling the state holding events to highlight coronavirus vaccinations, while a string of supporters have started staging online news conferences in an attempt to turn public favor his way.

In a Friday interview with San Francisco's KQED news radio station, Newsom depicted the effort as a challenge to his administration’s progressive policies and not a reaction to his leadership during the pandemic that has claimed over 55,000 lives in California.

Newsom received high praise for his aggressive approach to the coronavirus last spring, when he issued the nation’s first statewide stay-at-home order.

But in more recent months, he has faced growing public frustration over health orders that shuttered schools and businesses and a massive unemployment benefits fraud scandal. He also took a public drubbing for attending a birthday party with friends and lobbyists at the exclusive French Laundry restaurant, while telling residents to stay home for safety.

Responding to Newsom’s campaign, the California Republican Party pointed to a slew of issues beyond the coronavirus.

“The highest poverty rate in the nation, the largest number of homeless, some of the highest gas prices, unemployment checks going to death row inmates, and up to $31 billion in unemployment fraud,” the party tweeted at Newsom. “The recall is gaining momentum because of your failed leadership.”

Another name being discussed in GOP circles is former President Donald Trump’s then-acting director of national intelligence, Richard Grenell, who has not responded to requests for comment on a possible candidacy.

It’s not uncommon in California for residents to seek recalls, but they rarely get on the ballot — and even fewer succeed.