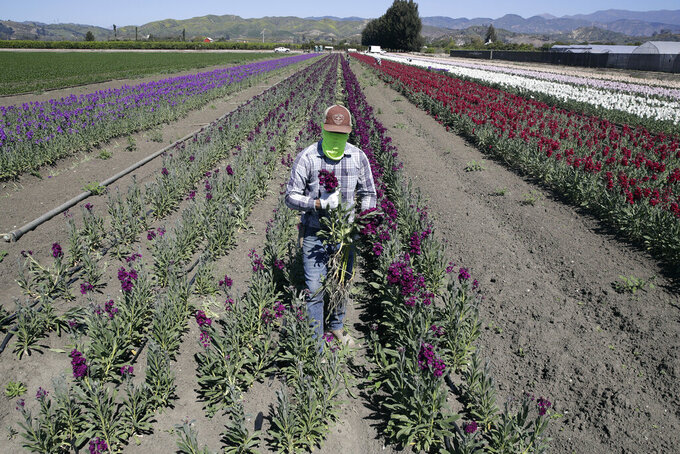 FILE - In this April 15, 2020, file photo, a farmworker, considered an essential worker under the current COVID-19 guidelines, covers his face as he works at a flower farm in Santa Paula, Calif. Gov. Gavin Newsom on Friday, July 24, 2020, pledged to do more to protect Latinos and essential workers from economic and health harms caused by the coronavirus pandemic, but he said he will do so by working with the Legislature, not acting on his own. (AP Photo/Marcio Jose Sanchez, File)

SACRAMENTO, Calif. (AP) — California Gov. Gavin Newsom pledged Friday to do more to protect farm workers, grocery clerks and other essential workers — many of whom are Latino — from the health and economic harms of the coronavirus as the infection spreads through their communities.

“Not enough focus, candidly, has been placed on essential workers in this state," Newsom said during his daily news conference.

Among Newsom's plans: Provide temporary housing for infected workers who need to isolate from their families; expand paid sick leave and workers compensation benefits; expand a state public awareness campaign around mask usage; give new guidance to employers and require them to report outbreaks of the virus to their local health departments.

But his immediate actions were limited. Rather than act through executive order, as Newsom has often done, he said he'll work with state lawmakers to pass legislation. He signed executive orders in the spring aimed at halting evictions, expanding sick leave and workers compensation, but many have expired or will soon.

Latino lawmakers and nonprofits welcome the focus but called it first steps to address a pressing and grave problem.

“This is something that has to be talked about every single day," said Christian Arana, policy director for the Latino Community Foundation. He said lawmakers needed to take swift action because of the rapid spread of the virus through the state and community.

Latinos make up 39% of California's population but 55% of confirmed positive coronavirus cases, according to state data. They account for 45% of the deaths, more than any other group. The majority of farm workers, construction workers, cooks, food prep workers, truck drivers, cashiers and janitors are Latino, Newsom said.

Many farm workers still don't have access to appropriate masks and protective equipment, and many are afraid to get tested for the virus because it could force them to stop working, said Armando Valdez, who runs a nonprofit in Fresno and has been working with farm workers and other families in the area during the pandemic.

“If you do it and become positive you're not going to have any food on your table, but if you continue you most likely can either die of this or infect other people," he said.

He said much of the state and federal virus relief money has been tied up in bureaucracy or run through organizations that aren't the closest to the ground. Many workers are still getting evicted despite state policies designed to prevent it right now, and at some farms workers still aren't getting enough protective equipment, he said. His organization made and distributed more than 4,000 masks.

Efforts in the Legislature attempt to tackle some of these problems. A bill by Democratic Assemblyman David Chiu and others, would prevent landlords from evicting tenants who can’t pay their rent during the pandemic. It would give tenants up to one year to pay back that rent before a landlord could file a civil action, which would not include eviction. Another bill by state Sen. Jerry Hill would make a coronavirus infection eligible for workers’ compensation benefits. That bill has already cleared the Senate and is now in the state Assembly.

A third bill, by Democratic Sen. Anthony Portantino, would require expanded paid sick leave for food sector workers, including farm workers, so that people who are sick don't come to work. Democratic Assemblywoman Eloise Gomez Reyes has legislation that requires businesses to report virus outbreaks, something they aren't currently mandated to do.

“Our community is in grave need of government intervention. Requiring businesses to be transparent with their workers and the state about positive coronavirus cases in the workplace is a basic action we can take to protect Latino workers," members of the legislative Latino Caucus said in a statement.

Beyond legislation, Newsom highlighted a program called Housing for the Harvest aimed at providing hotel or motel rooms for agricultural or food processing workers that need to isolate from their families. The Federal Emergency Management Agency will pay for the bulk of the program.

Newsom urged Californians to consider the “incredible contribution" of farm workers who harvest the fruits and vegetables that line grocery stores all year round.

“Don't forget the folks that make sure to make that abundance available to you. And we have to make sure that we have an abundance mindset in terms of helping support these workers and make sure that they're safe, they're healthy," he said.

He also announced plans to expand the state's public awareness campaign around the importance of wearing masks and to give new handbooks to employers detailing how to comply with the state's rules and regulations. Newsom said the state didn't do a good enough job explaining to industries how to reopen safely as officials loosened the stay-at-home order.