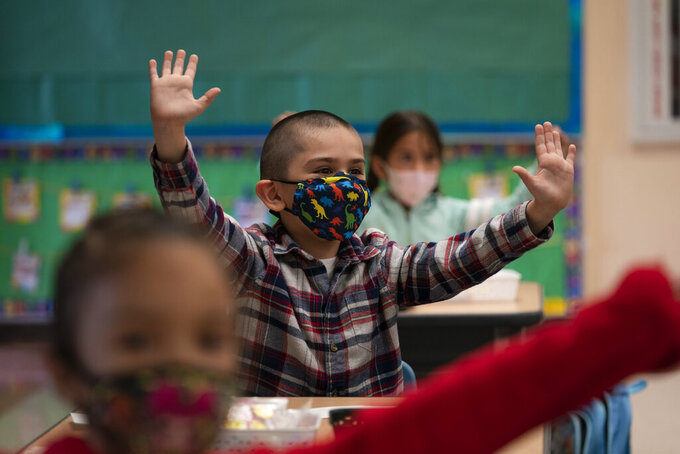 FILE - In this April 13, 2021, file photo, kindergarten students participate in a classroom activity on the first day of in-person learning at Maurice Sendak Elementary School in Los Angeles. All 4-year-olds in California could go to kindergarten for free under a new proposal Wednesday, May 12, 2021, from Gov. Gavin Newsom's administration, part of a broad new education spending package made possible by the state's surprise budget surplus. (AP Photo/Jae C. Hong, File)

Newsom announced the measures as part of a broad new education spending package made possible by the state’s surprise budget surplus. The surplus means California has about $93.7 billion for public education this year, based on a voter-approved law. That’s $36 billion more than last year and $17.7 billion more than the governor’s initial estimate in January.

Newsom’s plan aims to address many of the inequities that the coronavirus pandemic exposed, he said, including the need for robust mental health services to address childhood depression and trauma, more teachers and higher teacher-student ratios.

“People don’t start behind, they are left behind,” Newsom said during a news conference at a Monterey elementary school. “We are looking to transform — not go back to where we were — but transform our education system.”

Anticipating a massive budget deficit this year because of the pandemic, Newsom and the state's legislative leaders agreed on a budget last year that raised taxes and cut spending, including delaying more than $12.5 billion in payments to public school districts.

But the pandemic mostly affected lower-wage workers, while those with higher salaries kept their jobs and kept paying taxes. Combined with a surging stock market and the state’s progressive tax structure, Newsom announced Monday that the state would have a $76 billion surplus.

The surplus is good timing for Newsom, who will face a recall election later this year fueled by anger over his handling of the pandemic. Newsom has announced a bonanza of new spending proposals, including returning $8.1 billion to taxpayers in the form of tax rebates and spending $12 billion to tackle the state’s homelessness problem.

Newsom’s K-12 education plan would eventually open California’s two-year transitional kindergarten program to all students starting at age 4. The proposal fulfills a promise by Newsom and legislative leaders to pay for universal 4-year-old kindergarten in California.

Previous proposals have concerned some local school officials who worried they would run out of teachers. Teacher retirements increased 26% during the second half of 2020, according to the California State Teachers’ Retirement System. A state survey found that 56% of those who retired cited the difficulty of teaching during the coronavirus pandemic.

Newsom’s plan would address that problem by giving $1.1 billion to some school districts to hire more staff. To be eligible for the money, at least 55% of a district’s enrollment would have to be either low-income students, children learning English as a second language or kids in foster care.

Superintendent of Public Instruction Tony Thurmond shared a trauma from his childhood, saying he was raised in Monterey until his mother died when he was six and sent to live 3,000 miles (4,800 kilometers) away to be raised by a cousin.

In the 1970s, when Thurmond was growing up, there wasn’t much discussion about how to address trauma in students, he said. “I can’t think of anything more important than how we address the social emotional needs of our students,” Thurmond said.

The governor's plan requires support from the Democratically controlled state Legislature, which has until June 15 to pass a spending plan for the 2021-2022 fiscal year.

The governor’s plan allocates $3.3 billion to expand incentive programs for teachers, including expanding $20,000 grants for teachers who volunteer to work in high-needs schools.

Newsom also wants to pay for an after-school program and six weeks of summer school for districts with high concentrations of low-income students, children learning to speak English and kids in foster care. The programs would be available for students up to 6th grade.

“For many families, schools are a place where they get food, they get health care, they get social services. It’s acknowledging that schools are no longer a place where we just get educated, they’re really a community hub for many of our neighborhoods,” said Assemblyman Phil Ting, a Democrat from San Francisco and chair of the Assembly Budget Committee.

Those programs would eventually be available to about one in three public school students, or 2.1 million children, for an annual cost of about $5 billion once it's fully implemented, his administration said.

Newsom’s plan to establish universal access to transitional kindergarten would not mean parents have to send their 4-year-olds to school. But school districts would have to offer it, with more children becoming eligible for kindergarten each year until it's fully implemented in the 2024-25 school year. The Newsom administration says it will cost $2.7 billion per year by that time.

California is also scheduled to get billions in coronavirus aid funding from the $1.9 trillion relief package President Joe Biden signed.

Newsom wants to use $2.1 billion of that money to start college savings accounts for students from low-income families and students who are learning to speak English or are in foster care, from $500 to $1,000 per student.