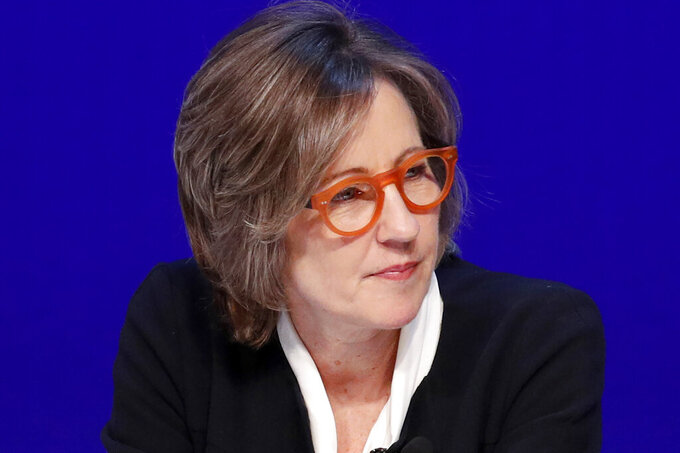 FILE - In this May 14, 2018 file photo, Dee Dee Myers, executive vice president at Warner Bros., speaks during a women's forum at the Wynn hotel and casino in Las Vegas. Myers, a former press secretary to President Bill Clinton, became a senior adviser to California Gov. Gavin Newsom on Friday, Dec. 11, 2020, and director of the Governor's Office of Business and Economic Development. (AP Photo/John Locher, File) 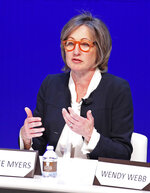 SACRAMENTO, Calif. (AP) — California Gov. Gavin Newsom is adding seasoned political operatives after recent departures to his inner circle as he enters the second half of his term amid a difficult stretch of the pandemic and as he tries to overcome recent political stumbles.

Newsom on Friday named Dee Dee Myers, a former Warner Bros. executive and White House press secretary, as director of the Governor's Office of Business and Economic Development. She joins Jim DeBoo, a California consultant well-versed in the quirks of the state capital and statewide political campaigns, as a senior adviser to the governor. Newsom, a Democrat, has named a number of other top staffers and agency heads in recent weeks.

It's not unusual for a governor to change up staff several years into his tenure. Add to that a pandemic that has altered Newsom's governing agenda and an incoming Democratic administration in Washington, and it makes sense to see broad changes, said Susan Kennedy, who served as deputy and chief of staff to former Govs. Gray Davis, a Democrat, and Arnold Schwarzenegger, a Republican, respectively.

“You're two years in, you've got a presidential administration coming in with a lot of Californians moving to Washington, and you have a major crisis which has dictated your agenda and skill sets you need around," she said.

She called Myers an “MVP."

“He could hardly do better bringing in someone of her caliber at this point in time when were going to be facing a really challenging recovery period," Kennedy said.

Newsom is facing renewed skepticism over the state’s latest wave of coronavirus business lockdowns and the continued fallout over his decision to attend a birthday party at an upscale restaurant while urging Californians not to gather with friends.

The Governor's Office of Business and Economic Development has been without a leader since April, when its former director stepped down to deal with personal issues. Myers joined the administration in an informal capacity in the spring and helped advise a task force on jobs and economic recovery.

She recently served as executive vice president for communications and public affairs at Warner Bros. She has also counseled major clients on crisis communications for the Glover Park Group and is director of Wynn Resorts, the high-end hotel and casino development company.

Newsom said in an emailed statement that Meyers' three decades of experience gives her “an ability to work across sectors, ensuring that our recovery is built upon common ground and common solutions."

Beyond Myers, Newsom's new additions include DeBoo as senior adviser, making official on Jan. 1 a role he has informally held. DeBoo's communications firm lobbies on behalf of major clients, including the California Medical Association and the California Apartment Association, and he's worked for a former Assembly speaker. He has also run campaigns for major statewide ballot measures.

Observers say adding him to Newsom's staff signals a desire for sharper political thinking and better connections with the state Legislature, but it could raise questions about special interests' access to the governor.

His administration will also appoint a chief ethics adviser.

Elsewhere in the administration, Newsom named Tomás Aragón as the new director of the California Department of Public Health, another key job in the state's pandemic response. Sonia Angell resigned from the job in August after a data glitch led to an undercount in coronavirus cases, leaving the state with an interim director through one of the most difficult stretches. Aragón had been the health officer in San Francisco.

Sherry Bebitch Jeffe, a professor of public policy communication at the University of Southern California, said Newsom needs to improve his communication with the public and rebuild trust.

“I think that’s the key to the next year for him," she said.