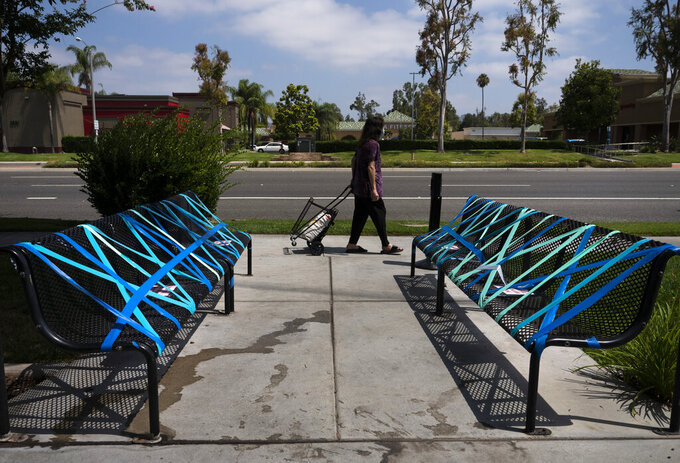 A woman walks past benches taped off for social distancing outside a restaurant, Thursday, July 2, 2020, in La Habra, Calif. California's mood has gone from optimistic to sour as coronavirus cases and hospitalizations are on the rise heading into the July 4th weekend. Gov. Gavin Newsom has ordered bars and indoor restaurant dining closed in most of the state, many beaches are off limits, and he's imploring Californians to avoid holiday gatherings with family and friends. (AP Photo/Jae C. Hong)

SACRAMENTO, Calif. (AP) — Gov. Gavin Newsom urged Californians on Thursday to turn to their “better angels" and use common sense by wearing masks and skipping traditional gatherings with family and friends during the holiday weekend — a message echoed by local officials who previously sparred with the governor over his virus orders.

Infections and hospitalizations are rising rapidly in many parts of California and at a news conference Newsom was pressed repeatedly on whether the state is being aggressive enough in enforcing his health mandates, especially an order to wear masks that was put in place two weeks ago.

Newsom previously noted he has established teams of state regulators to target businesses that don't enforce the mask rule or follow other requirements for social distancing and hygiene. State authorities also sent letters Thursday to every employer — about 350,000 businesses, — warning that failure to implement the face coverings order could result in fines and potential criminal prosecution.

But the governor acknowledged authorities can only do so much when it comes to the behavior of individuals outside business settings.

“We’re not going into everybody’s backyard and enforcing,” he said. “We’re just encouraging people to be safe, to be thoughtful about themselves and others.”

Dr. Mark Ghaly, the state's top health official, called the holiday weekend a “big deal" for efforts to contain the virus and urged people to behave differently than they did on Memorial Day weekend, when many gathered socially. Authorities say that behavior helped spur the latest surge of cases.

“This is another time for Californians to pay attention to what happened over the last month and make a different set of decisions now," he said.

Across the state, local officials largely parroted the governor's words about the importance of personal responsibility. But they also took action. Along the coast, many beaches and parks were closed or access was restricted. Fireworks shows were canceled up and down the state. In West Hollywood, Santa Monica and Monterey, officials announced they were ready to fine people who don't wear masks.

Coco Cocozzella, who wore a black face covering while outside in Sacramento, said masks are “kind of a pain” but she doesn’t mind the state mandating she wear one. At home, she said, she keeps hers on a hook with her keys to remember to take it when she goes out.

She said fines are a step too far but people who don't wear a mask should be “stopped and warned.”

“You should get a little scared,” she said.

California had been on a good trajectory with its virus efforts until mid-June. As infections rose markedly, Newsom took action this week. Los Angeles and 18 other counties with the most troubling virus increases were forced to shutter bars, forbid inside restaurant dining and close movie theaters, among other things.

More than 2,200 additional cases of COVID-19 were reported Thursday in Los Angeles County. In addition, nearly 1,900 people were hospitalized — the largest number since early May — and 28% of them are in intensive care, the county reported.

“Unfortunately, we continue to see negative trends in the data and we urgently need to make a change in the trajectory," Public Health Director Barbara Ferrer said. “We must make sure we are not unnecessarily spending time outside with others and use this opportunity as a countywide reset. We need everyone’s help."

San Diego, the state's second-largest county, previously wasn't among the 19 counties— including virtually all of Southern California — that are on the state watch list. But local authorities said Thursday the state had notified them that San Diego County would join the list Friday following a series of outbreaks this week.

In neighboring Orange County, where officials had fought Newsom's order to close down beaches and the health officer resigned due to harassment that followed her order to wear face coverings, Supervisor Michelle Steel and Sheriff Don Barnes advised people to wear masks. The sheriff said his deputies will urge voluntary compliance rather than use aggressive enforcement.

Meanwhile, in Santa Clara County in the San Francisco Bay Area, Public Health Officer Sara Cody announced hair and nail salons, gyms and other businesses could open by July 13, even as the county followed state orders to close bars and other establishments because its cases are rising.

Cody was the architect of the stay-at-home order in the Bay Area that preceded Newsom's statewide order by several days in March.

Cody criticized Newsom's rapid reopening of the economy in early June. But she now says that even with increases in cases and hospitalizations in her county, she felt comfortable setting a date to reopen additional businesses. The new order is about “acknowledging that we have been sheltering in place for a very long time" and need “something sustainable because we’re going to be at this for a while," she said.

Newsom also announced a new public awareness campaign with billboards, TV and radio ads and social media posts urging Californians to wear face coverings and reminding them of the danger of the virus. One ad shows a person breathing on a ventilator with a mask that reads: “Even without symptoms, you can spread COVID-19. And people can die. People like your mom.”

“If you think this hasn’t or wont impact you because it hasn’t impacted you, I hope to disabuse you of that," Newsom said during his news conference.

The ads are starting in English and Spanish and will eventually run in seven languages. The effort also includes social media ads and will focus specifically on Black and Latino communities, which are being disproportionately impacted by the virus.

The new campaign is funded in part by Silicon Valley groups and philanthropists, including Tom Steyer, a former Democratic presidential candidate and head of Newsom’s Task Force on Business and Jobs Recovery.