California jobless rate 16.3% in May, down a bit from April 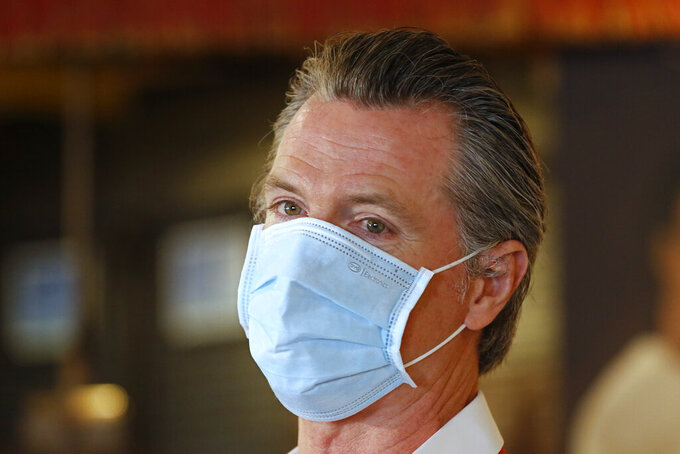 California Gov. Gavin Newsom, wears a face mask as he answers a reporter's question during his visit to the Queen Sheba Ethiopian Cuisine restaurant, in Sacramento, Calif., Friday, June 19, 2020. Newsom visited the restaurant that is participating in the Great Plates Delivered program that provides meals to older adults who are at-risk to COVID-19. (AP Photo/Rich Pedroncelli, Pool)

SACRAMENTO, Calif. (AP) — California's job losses were even higher in April than previously thought, state figures released Friday showed, producing a staggering unemployment rate not seen since the Great Depression as businesses struggled under a stay-at-home order meant to slow the spread of the coronavirus.

The Employment Development Department now says April's unemployment rate was 16.4%, not 15.5%. The revised number represents nearly 170,000 more people out of work in April than initially reported.

May's unemployment rate was slightly better at 16.3% as the state added 141,600 payroll jobs. But it was a blip compared to the 2.4 million payroll jobs the state lost in April, more than all the jobs shed in California during the Great Recession a decade ago.

“The economy clearly has hit the bottom, and most likely that has occurred in May,” said Sung Won Sohn, a professor of finance and economics at Loyola Marymount University. “But if we were to have a major second (coronavirus) wave, even bigger than the first wave, all bets are off. Then we are looking at a pretty dismal scenario.”

In California, most businesses are now open, but with restrictions that in many cases limit the number of customers they can serve. Most California counties now allow restaurants, retail stores, movie theaters, hotels, gyms and other businesses to open.

But with new virus cases and hospitalizations rising, Gov. Gavin Newsom on Thursday ordered people to wear masks in most indoor settings and outdoors when physical distancing isn’t possible.

“I hope that people take it very seriously, because we’re still in the first wave,” said Newsom, who wore a mask Friday while visiting a Sacramento restaurant that was preparing meals for older adults who can’t shop and cook for themselves during the pandemic. “I think some of us are developing amnesia, that somehow this is behind us and we’re fine and it’s OK."

California's May jobs report is based on a survey conducted the week of May 12. Some California businesses had reopened by then. But openings greatly accelerated toward the end of the month as larger counties move forward.

Nine of the state's 11 industry sectors added jobs in May, led by 75,000 in construction and 64,800 in leisure and hospitality, which includes restaurants. Still, all sectors except mining and logging had declines compared to this time last year.

The leisure and hospitality sector was down nearly 900,000 jobs, the most of any industry. Even as restaurants begin to reopen, they have to do so with fewer tables to make physical distancing possible. The result is fewer customers, and fewer employees.

“I’d say, safely, 25% of the restaurants that existed before this crisis are likely not going to be operating by spring of next year,” said Jot Condie, president and CEO of the California Restaurant Association.

Commercial construction crews saw increased demand once activity resumed in six San Francisco Bay area counties last month. Statewide, the industry was also buoyed by restaurants and other businesses in need of repairs before reopening, according to Peter Tateishi, CEO of Associated General Contractors of California.

But the industry remains concerned about the future, especially with decreased demand for office space as more companies allow employers to work from home and state and local government revenue declines could pause or postpone infrastructure work.

“We're cautious about the future," he said.

The state's economy has been propped up by the more than $30 billion in unemployment benefits paid since the start of the pandemic, according to the California Employment Development Department. The state has exhausted its account to pay these benefits, forcing it to borrow more than $2 billion from the federal government that eventually must be paid back.

Plus, many companies are paying employees through the federal Paycheck Protection Program. Once that ends, the state's unemployment rate could increase again, said Michael Bernick, the former director of the California Employment Development Department and an attorney with the Duane Morris law firm.

“Some of those jobs are zombie jobs, but we don't know how many yet,” he said, adding that: “All of these numbers are way off the charts from the monthly job reports we’ve had basically for the past 40 years.”

California has more than 167,000 confirmed coronavirus cases and more than 5,300 deaths, according to data complied by Johns Hopkins University.