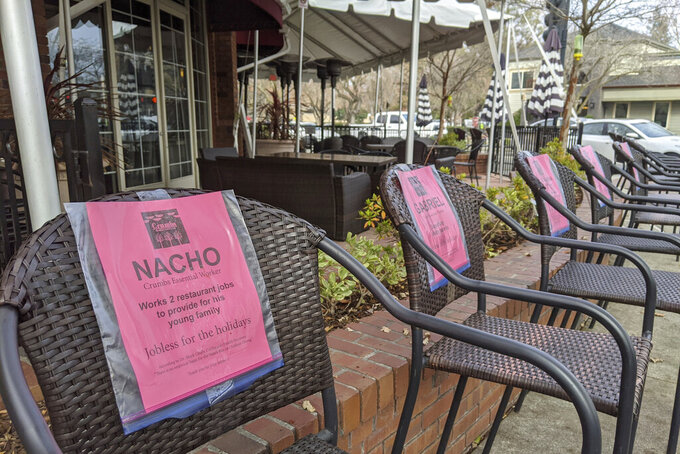 The jobless rate stands at 9% for December, the state’s first monthly rate increase since April.

The leisure and hospitality sector took the biggest hit — down 117,000 jobs — with more than 80% of those in accommodations and food services.

“This sector more than any other was impacted by the renewed lockdowns and virus spread,” said Michael Bernick, an attorney with the Duane Morris law firm and a former director of the California Employment Development Department.

California had gained 5,200 jobs in November before giving back 10 times that number last month.

It has recouped 44% of the 2.6 million nonfarm jobs lost at the start of the pandemic in March and April compared with 55.6% nationwide, as a continuing stay-at-home order imposed on most of the state during a massive holidays-fueled coronavirus surge “played havoc with California employment,” said Sung Won Sohn, a professor of finance and economics at Loyola Marymount University.

Bernick said the gain in construction jobs was surprising because there hasn't been much major commercial construction in urban areas and several major public works projects have been on hold.

Sohn said low interest rates, more people working from home and a desire for more space have boosted construction, while industries where employees can work remotely have prospered.

Neither man held out much hope for immediate relief from federal stimulus packages.

“The best stimulus will come from the vaccines. As they are widely distributed, the economy will receive a shot in the arm,” Sohn quipped. That echoes an analysis Friday from the nonprofit Public Policy Institute of California that job recovery will be limited until the virus is contained.

It's troubling that more than 500,000 people have dropped out of the labor force in the last year, despite a slight increase last month, he said. Some are taking care of children or the elderly during the pandemic or going back to school, but some may never rejoin the workforce.

The Employment Development Department's director, Rita L. Saenz, and the head of Gov. Gavin Newsom's Office of Business and Economic Development, Dee Dee Myers, in a joint statement contrasted the pandemic-driven downturn with the record-long job growth and record-low unemployment the state was experiencing just a year ago.

“The numbers we see today reflect the challenges we’ve faced and the work that needs to be done,” they said, calling on employers and employees to continue to “step up and protect one another.”

Yet the entreaty came amid more allegations of bungling by the department and ahead of the release of two state audits next week.

It was so many that the U.S. Department of Labor said it accounted for more than a quarter of all such claims nationally, and critics fear it is more evidence of widespread fraudulent payments that the Bank of America estimated top $2 billion and some put much higher.

But there were complaints Friday that the surge was driven by a change to the department's online benefits page and a faulty instruction to those who already filed to “reopen your claim.”

Instead, those who hit the button say it opened a new claim that must now be manually corrected to allow for recipients to receive an additional 11 weeks of benefits approved by Congress as part of a coronavirus relief package in December.

Department officials did not respond to repeated requests for comment or say how many might have been affected. The problem dates back at least a week.

The department sent Assemblywoman Lorena Gonzalez a guidance saying those who were waiting for the extension did not need to reopen their claims.

The department said there was “a second scenario” where some individuals whose claims were disqualified still were given the same online option.

“Our IT Branch is currently working on a fix so that these individuals do not have the option to reopen their claims, as they are currently disqualified," according to the guidance. "However, it is important to note that despite this temporary glitch, these individuals have NOT been paid benefits.”

The department did not say Friday if the glitch had been fixed.