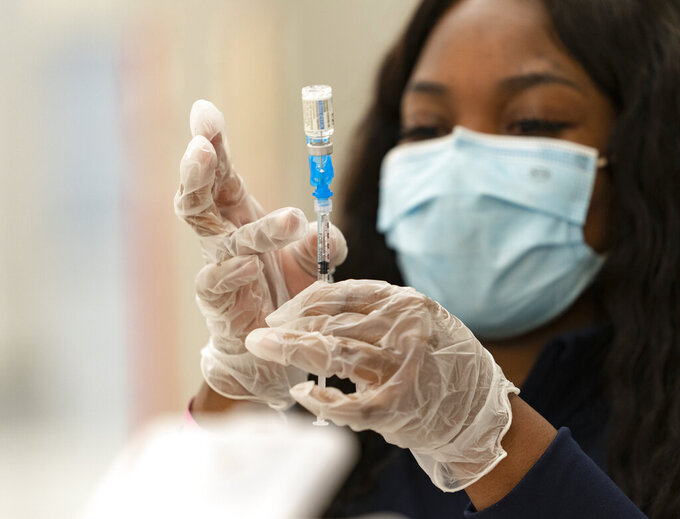 A health worker loads syringes with the vaccine on the first day of the Johnson and Johnson vaccine being made available to residents at the Baldwin Hills Crenshaw Plaza in Los Angeles Thursday, March 11, 2021. The California Department of Public Health (CDPH) is highlighting the new the one-dose Janssen COVID-19 vaccine by Johnson & Johnson. (AP Photo/Damian Dovarganes)

LOS ANGELES (AP) — California officials are contemplating what things will look like in the nation's most populous state once millions of people are vaccinated and they move to phase out restrictions on gatherings and businesses that have altered life for a year.

When officials last summer designed the four-tiered, yellow-to-purple system California now uses to decide whether people can dine indoors, go to the movies or gather with friends, they did not include a green tier — a recognition that a return to normalcy after the pandemic was far off. Now, Gov. Gavin Newsom's administration is preparing to add one.

“The likelihood of hitting that green tier is probably sooner than some of us thought when we were looking at the summer and fall," Dr. Mark Ghaly, California's health secretary, said Thursday.

State officials rely on a complicated formula, including virus spread, to determine which activities are restricted in each county.

But a green designation won't mean “go” for all things. Ghaly said such a label would still mean wearing masks and staying physically distant. He declined in an interview to offer more specifics on what restrictions would be maintained or to provide a threshold of vaccinations the state hopes to meet to allow such a go-ahead.

Earlier Thursday, state Public Health Director Dr. Tomas Aragón forecast that California could achieve herd immunity when about 75% of the population has been vaccinated, though that could change as the virus mutates.

That officials are optimistic enough to publicly discuss a green tier puts California in a dramatically different place than it was a few weeks ago during the state’s worst surge. Now case rates, hospitalizations and deaths are on the decline and vaccinations are on the rise.

On Thursday, Ghaly and other officials, including Dr. Nadine Burke Harris, the surgeon general, received the Johnson & Johnson vaccine publicly at sites in Los Angeles and Oakland to promote its safety and efficacy. The one-short J&J vaccine recently received emergency use approval from the federal government.

California’s supply of the single-shot vaccine is limited for now, but officials are eager to build confidence in it, particularly in Black and Latino communities. The state recently said counties can open faster once more people in vulnerable neighborhoods are vaccinated.

The Moderna and Pfizer vaccines both require two shots, while J&J only requires one dose. Although public health officials say it provides strong immunity, some people have been hesitant, worrying that it is not as protective as the others.

“The thing that came into my mind when that vaccine went into my arm was hugging my mom again. And I think that’s something that too many Californians have been without since this pandemic has begun,” said Burke Harris, who is Black.

Cornelia Stevens was among a few dozen residents lined up at the Los Angeles site. As a member of the California National Guard, she received an email Wednesday night informing her that her military branch was eligible for the vaccine.

“I’ve been waiting my turn. I didn’t think my time would come so quickly," said Stevens, 50.

Under the new reopening plan, counties can more easily move from the most restrictive purple tier to the lower red tier when 2 million vaccine doses have reached residents in California's most disadvantaged ZIP codes. Once 4 million doses are administered in those neighborhoods, it will be easier to move to orange.

When officials established the system in August, Newsom said it was too soon to look ahead to a green tier that would signal “go back to the way things were." The Democratic governor said Wednesday that officials have been working on a green tier for months “in anticipation of this bright light at the end of this tunnel."

Almost half the state's 58 counties have moved out of the most stringent restrictions, and major counties like Los Angeles and Orange are expected to do so soon, allowing limited indoor dining and the reopening of movie theaters and gyms. LA County, the state's most populous with 10 million residents, said it anticipates qualifying for the red tier between Monday and Wednesday of next week.

The state has reason to be cautiously optimistic, said Dr. Kirsten Bibbins-Domingo, chair of the department of epidemiology and biostatistics at the University of California, San Francisco. But she worries the state's plan to speed up reopening is “too aggressive."

An estimated 4.4 million people with certain significant, high-risk medical conditions or disabilities will be eligible for the vaccine Monday. They will not be required to provide documentation but will be asked to sign a self-attestation that they meet the criteria, the state’s public health department announced Thursday.

People who work in or reside in congregant places, such as detention centers, jails and homeless shelters, will also be newly eligible, as will public transit workers and airport workers for commercial airlines, the state also announced.

That added eligibility could create logjams if supply remains limited, Bibbins-Domingo said. At the same time, California must focus on vaccinating disadvantaged neighborhoods to reduce the likelihood of future outbreaks, she said.

“I worry that the real forward, hard-driving look to go to opening with thresholds that are a little bit easier to meet, frankly, is going to not quite play itself out the way that we'd all like," she said.