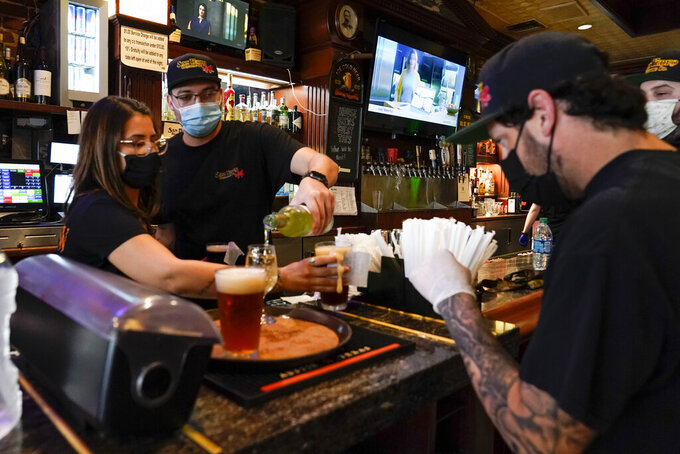 The nation's most populated state released guidance Friday for counties on reopening a broad range of businesses that have been closed since mid-March because of concerns about spreading the coronavirus. It also includes much-anticipated guidance on the fall reopening of schools, which have been shuttered since March.

The rules on schools and day camps will apply statewide. Only counties that have met certain thresholds on the number of cases, testing and preparedness will be allowed to start reopening other parts of the economy next Friday. Almost all of the state's 58 counties have met those thresholds. The guidance includes rules on hotels, casinos, museums, zoos and aquariums and resuming music, film and television production.

Democratic Gov. Gavin Newsom has been moving the state through a methodical four-step process for reopening, with most counties already allowed to reopen restaurants, hair salons, churches and stores with modifications. The new guidance relates to businesses in “Phase 3." But it does not allow nail salons to reopen, and the industry has previously sued the state. Hair salons were cleared to reopen several weeks ago.

When students return to classrooms in the fall, things could look vastly different. In addition to requirements for physical distancing, the state plans to supply every school and child care center with no-touch thermometers, hand sanitizer, face shields for every teacher, cloth face coverings for staff and students, and tight-fitting N95 masks for health care professionals in schools.

The state cannot order schools to close, but it can offer recommendations for districts to follow on reopening. School districts opted to close when Newsom issued a statewide stay-at-home order and developed distance-learning plans on the fly.

The guidance asks schools to try to keep students 6 feet (2 meters) apart at all times — in class, in the hallways and at recess. It also says schools should consider installing “portable hand-washing stations" as part of a rigorous hygiene regime urging students and staff to wash their hands before and after eating, coughing, sneezing, being outside and using the restroom.

The state also suggests staggering arrival times to minimize contact between students, staff and families and serving meals in classrooms or outdoors rather than in cafeterias. It calls for intensified cleaning and disinfecting — at least daily — of frequently touched surfaces on school buses and in buildings, such as door handles, light switches, student desks and chairs.

Many of the measures had been hinted at previously. But the guidelines prepared by California’s Department of Health offered the most formal reopening framework so far for school districts.

State Superintendent of Public Instruction Tony Thurmond said last week that he expects a “hybrid model” of instruction, balancing traditional classes and remote learning to accommodate the need for physical distancing. Thurmond is expected to release the Department of Education's guidelines for school reopenings next week.

School districts and educators have raised concerns about how to adopt all the changes at a time of shrinking budgets. Districts are facing the prospects of billions of dollars in budget cuts as the state scrambles to plug a deficit brought on by the virus.

Leaders in the entertainment industry, meanwhile, have been brainstorming safe ways to get back to work since film, television and commercial production in Los Angeles shut down on March 20.

The Directors Guild enlisted “Contagion” director Steven Soderbergh to head a committee to determine when and how productions can resume in collaboration with epidemiologists, unions and employers.

Film, television and commercial production make up a significant amount of the Los Angeles economy. According to nonprofit film office FilmLA, nearly 17% of the workforce is tied to the industry, which has been out of commission for more than two months now.

Guidance for museums, galleries, zoos and aquariums encourages using credit cards and contactless forms of payment as well as one-way walkways and hallways to limit contact. Single-use maps, pamphlets and guides should be provided, along with digital copies.

California’s confirmed coronavirus cases and hospitalizations remain stable. But it's preparing for a potential increase in infections as more parts of the economy reopen and people pack protests against racial injustice and police brutality.

For most people, the coronavirus causes mild or moderate symptoms such as fever and cough. For some, especially older adults and people with existing health problems, it can cause pneumonia and death.