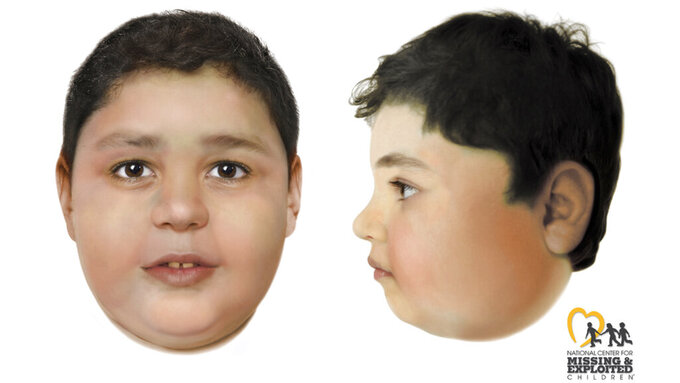 FILE - These artist's renderings created by the National Center for Missing and Exploited Children and distributed Thursday, June 3, 2021, by the FBI and Las Vegas Metropolitan Police Department depict a slain boy believed to be between the ages of 8 and 10 whose body was found Friday, May 28, 2021, off a hiking trail between Las Vegas and rural Pahrump, Nev. Authorities have identified the child as 7-year-old Liam Husted, from San Jose, California. Police said Monday, June 7, 2021, that his mother, Samantha Moreno Rodriguez, 35, is the suspect in his killing. (Las Vegas Metropolitan Police Department via AP,File) 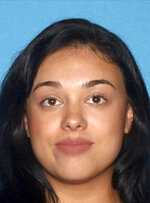 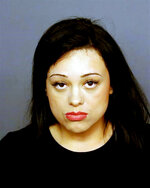 LAS VEGAS (AP) — A mother from San Jose, California, was arrested Tuesday in Colorado less than 12 hours after she was identified by Las Vegas police as the suspect in the death of her 7-year-old son, whose body was found by hikers in Nevada more than 10 days ago.

An FBI task force arrested Samantha Moreno Rodriguez, 35, at a hotel in eastern Denver not far from Interstate 70, Las Vegas police Lt. Ray Spencer said. Rodriguez was with a man when she was found, but Spencer said police do not believe he had “any involvement whatsoever in this case.”

“We are all relieved that we were able to get her into custody so quickly,” said Spencer, the homicide lieutenant who had made nearly daily pleas for public help to identify the boy, Liam Husted, since his body was found May 28 outside Las Vegas.

Spencer would not say during a news conference how Liam died, whether a weapon was involved or describe a motive for the slaying. He referred to a coroner’s investigation and toxicology tests, which can take weeks to complete.

The homicide lieutenant said it was clear the boy was killed in the remote Mountain Springs area where he was found.

In San Jose, the boy’s grandfather told The Mercury News that Liam lived with his mother and father, Nick Husted. He said the boy had special educational needs, attended a learning center for autistic children and had a home counselor for behavioral issues. Outside help ended during the COVID-19 pandemic.

“As Liam got older it was strainful for them but they managed,” grandfather Chris Husted said in an email, the newspaper reported. “There was no sign of abuse at all. Liam was an innocent child, dependent for their care and good intentions, like all people with special needs.”

Spencer said the parents were not married but were together for several years. He declined to speak about Liam’s needs.

Chris Husted and Nick Husted did not immediately respond to emails from The Associated Press. The grandfather characterized his son as devastated by Liam’s death.

“Something went horribly wrong with Sam, and Liam is unfortunately taken away,” Chris Husted told The Mercury News. He said Rodriguez “needs to be held accountable no matter why it happened.”

Rodriguez will be jailed in Denver pending a court appearance and her extradition to Nevada to face a murder charge, Las Vegas police said.

Spencer said Las Vegas police detectives were in Denver to interview Rodriguez. It was not immediately known if she had a lawyer to speak in her defense.

Liam was identified publicly for the first time Monday, and Spencer said a murder warrant was issued in Las Vegas for Rodriguez.

Rodriguez left San Jose on May 24 in a dark blue 2007 Dodge Caliber packed full of their belongings, Spencer said.

She left behind a message, telling Nick Husted she was sorry, was going to try to get a house for herself and Liam and that the couple could talk in the future.

“There was nothing suspicious in that message that would lead the father to believe that Liam, or Samantha, was, were involved in any kind of foul play or that there was any harm, potentially to come,” Spencer said.

The police official said Liam’s father waited until June 1 to report to San Jose police that the boy was missing. Spencer said Nick Husted was not a suspect in Liam’s death.

The mother and son were seen May 26 in two Southern California cities, Laguna Beach and Victorville, before they arrived in Las Vegas.

Police believe Liam’s body was left after dark May 27 or early May 28 hidden behind a bush at a trailhead off State Route 160, the main highway between Las Vegas and rural Pahrump.

Spencer said police now know where the mother and son stayed in the Las Vegas area, but he declined to describe the place or what investigators found there.

Liam’s body remained unidentified until a family friend told San Jose police on Friday that she had not seen Rodriguez or Liam and she recognized the boy from a widely distributed rendering prepared by the National Center for Missing and Exploited Children.

The boy’s identity was the focus of an intense public campaign that included an offer from the FBI of up to $10,000 for information. Spencer and FBI Special Agent Jeremy Schwartz declined Tuesday to say if anyone became eligible for the reward.