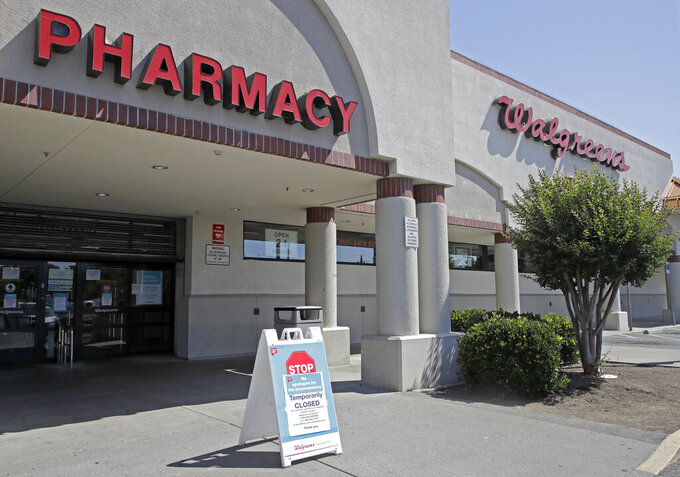 A sign alerting customers to a closed Walgreens store is seen on Wednesday, June 3, 2020, in Vallejo, Calif. A person was shot by police when people began breaking into stores late Monday, and another round of violence erupted late Tuesday, June 2, 2020. The shooting occurred when a group that had entered a Walgreens rammed a police officer outside, City Manager Greg Nyhoff said in a statement, he did not say whether the suspect survived. (AP Photo/Ben Margot)

SAN FRANCISCO (AP) — California authorities have praised the thousands of peaceful protesters who thronged streets around the state while announcing criminal charges against more than 100 people accused of looting and violence. Police in the San Francisco Bay Area said a break-in suspect was killed when officers mistook his hammer for a gun.

The shooting of 22-year-old Sean Monterrosa in the city of Vallejo on Tuesday was the only confirmed California death at the hands of law enforcement following days of massive demonstrations accompanied, at times, by attacks on police and wholesale looting of stores. Police have blamed the stealing on organized groups of thieves, not protesters.

On Wednesday, there were few signs of violence as demonstrations over the death of George Floyd in Minneapolis continued for an eighth day. An estimated 10,000 people gathered in San Francisco while thousands more flocked on foot and in cars to Hollywood. Sacramento and smaller cities also had protests.

National Guard troops requested by San Diego Diego County sheriff rolled into the city of La Mesa, where a peaceful weekend protest turned into violence and destruction. Guard members took up posts at the city's police department and other sites. The sheriff said the troops will secure critical infrastructure.

In downtown Los Angeles, dozens of people sat down and waited to be arrested as an act of civil disobedience more than an hour after curfew.

NBA stars Steph Curry and Klay Thompson marched with protesters in Oakland, where some demonstrators lay down for nearly nine minutes, representing the amount of time a white police officer pressed a knee into Floyd’s neck while he pleaded for air.

Police kept a mainly hands-off policy during the day even after curfews took effect.

Some protesters in Oakland held a sit-in to defy the 8 p.m. curfew, and some had kits equipped with paper towels and vinegar in case police used tear gas, the San Francisco Chronicle reported.

Nearly two hours later, however, no arrests had been made and a dance party broke out at one intersection.

Interim Oakland Police Chief Susan E. Manheimer told reporters that the news media is “the eyes and ears of checks and balances” but journalists should follow orders to disperse “for their own protection,” the Chronicle reported.

“When the dispersal order is given, I hope that you will safely adhere to that so that then we can work with you after we have done what we need to do in the role of safety and security,” Manheimer said.

More than 3,000 people had been arrested in the county since protests began last week, most accused of curfew violations.

The county also announced it had charged 61 people with crimes from previous nights, mostly looting. Sacramento County, which saw at least $10 million in property damage, filed charges against 43 people.

Orange County brought felony cases against two men, accusing one of trying to steal a police car and another of assaulting an officer by throwing rocks and bottles during demonstrations.

She said she supports peaceful protests “that already have brought needed attention to racial inequality throughout our society, including in the criminal justice system” but has a duty to “prosecute people who loot and vandalize our community.”

As violence and break-ins dwindled, some California counties and cities shortened or announced plans to end the curfews, which were criticized by protesters and some lawmakers as restricting free speech.

Los Angeles County pushed back the start of its curfew from 6 p.m. to 9 p.m., a help to newly reopened restaurants and retail stores that were shut down for weeks by anti-coronavirus orders.

“It’s just killing my dinner service. But I believe the curfew helps thin out the crowds,” said Darren Melamed, owner of Pizza World restaurant that was spared the major damage that hit dozens of neighboring businesses in the Fairfax District.

The San Francisco Bay Area city of Vallejo has been a significant exception as other cities become more peaceful.

The chief said officers responding to calls of looting at a Walgreens around 1 a.m. Tuesday confronted about a dozen people in the parking lot. One of the suspect’s cars rammed into a police vehicle.

Officers spotted Monterrosa near the building with what appeared to be a gun in his waistband. An officer opened fire through the windshield of a police car, hitting Monterrosa. Williams said the suspected gun turned out to be a hammer.

John Burris, an attorney for Monterrosa’s family, said the victim “was shot multiple times while he was on his knees and appeared to be trying to surrender.”

The state capital of Sacramento extended its nighttime curfew through the weekend.

“I say that very reluctantly, but we want to make sure that everybody, including protesters, are safe,” Mayor Darrell Steinberg said.

This story corrects the Minneapolis victim's last name to Floyd, not Lloyd, and the length of demonstrations in California to eight days, not six.