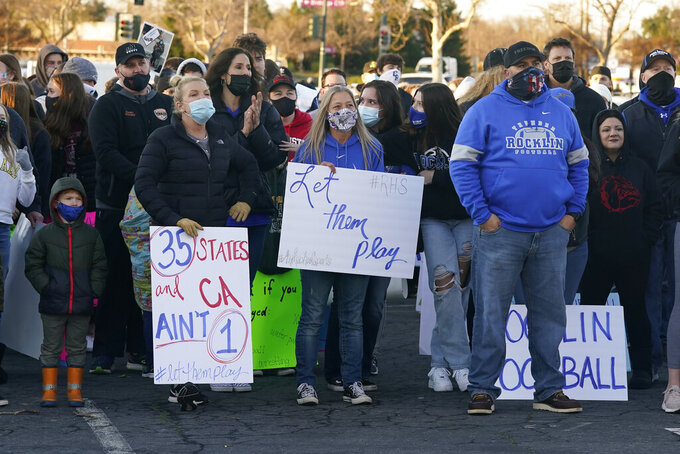 FILE - In this Jan. 29, 2021, file photo, people gather at a "Let Them Play Rally" in Citrus Heights, Calif., calling for California Gov. Gavin Newsom to allow the state's school children to participate in sports. California public health officials loosened the rules for youth sports on Friday, Feb. 19, 2021, allowing all outdoor sports to resume in counties where COVID-19 case rates are at or below 14 people per 100,000. (AP Photo/Rich Pedroncelli, File)

SACRAMENTO, Calif. (AP) — Youth sports competitions can resume next week in parts of California and could be back for a vast majority of the state by the end of March under a plan announced Friday by public health officials that clears the way for abbreviated spring versions of high school football, field hockey, gymnastics and water polo.

“It’s going to be a very welcome reprieve for hundreds of thousands of kids who (experienced) a lot of pain in not being able to play in the fall,” said Patrick Walsh, head football coach for Junipero Serra High School, a gridiron power just south of San Francisco. “This gives us a sense of hope and something to look forward to in an otherwise pretty melancholy situation.”

Nearly all interscholastic, club and community league sports in California have been on hold since the pandemic began in March, along with adult recreational sports that also are covered by the new rules. The California Interscholastic Federation, the state's high school sports' governing body, moved most fall sports to the spring in the hopes that students could salvage some of their season.

But state rules only allowed soccer, baseball, football and nearly all other team sports to resume once a county advanced out of the state's most restrictive of four tiers of virus regulations, a slow process that threatened to scuttle any spring seasons.

Gov. Gavin Newsom, a former college baseball player and father of four children who play youth sports, repeatedly said he wanted to get children back onto playing fields but would only do it when it was safe. California's virus cases have dropped precipitously in the last six weeks and that prompted a relaxation of the sports guidelines.

Under the new rules, a county's overall tier designation doesn't matter. The one metric being used for sports competitions is per capita cases. All outdoor sports are allowed — with safety protocols — once a county reaches a level of 14 cases or lower for every 100,000 people.

There are 27 counties that meet that standard and can resume competitions as soon as next Friday, Feb. 26. They are virtually all in Northern California and include three of the four largest San Francisco Bay Area counties — Santa Clara, Alameda and San Francisco — as well as many of the state's most rural counties.

Another 16 counties, including Los Angeles, San Diego, Orange and Fresno, will likely meet the standard within a few weeks.

The new rules apply to all outdoor youth and adult recreational sports, including schools and community-sponsored leagues. The rules do not apply to collegiate or professional sports that already are being played under a separate set of rules or “community events” like marathons and other endurance races. And they also don't apply to indoor sports like basketball and volleyball.

“That's more complicated, and that's where we have more controversy, and understandably so,” Newsom said Friday during a news conference at a COVID-19 vaccine clinic in Alameda County. “We are confident that if we can resume it will only help enliven the capacity of these kids to feel more engaged, feel more alive.”

The new rules impose lots of limitations, including banning indoor activities like team dinners and film study and prohibiting athletes from sharing equipment. Coaches and players not in games must wear masks, and fans should be limited to immediate family members.

Most burdensome of all, the rules require weekly virus testing for all coaches and athletes 13 and older in close-contact sports including football, rugby and soccer if they are played in counties with a per capita rate above 7 cases.

Newsom said the state would pay for those tests, so as not to prohibit some less wealthy schools from participating. But he did not provide more details other than to say “we will absorb the cost.”

The rules will apply to school districts regardless of whether they have returned to in-person instruction, a key component pushed for by a group of high school coaches organized under the banner “Let Them Play CA.”

“This situation would be the classic cut off our nose to spite our face if we didn't allow sports to happen because certain school districts were not opening,” said Justin Alumbaugh, a social studies teacher and head varsity football coach De La Salle High School, a perennial state championship contender located in the San Francisco Bay Area city of Concord. “We've punished kids enough. Today a lot of that punishment stopped.”

Others were less charitable to the governor, including Republican Assemblyman James Gallagher, who has been advocating for the return of youth sports for months.

“I think this could have been done weeks ago, but I appreciate the governor listening to the voices of these kids, parents and coaches,” Gallagher said. “Now do it for schools,” he added, a reference to reopening more districts for classroom instruction.

This story has been corrected to say the new rules for youth sports take effect Feb. 26.