California: People must look for work to get jobless aid 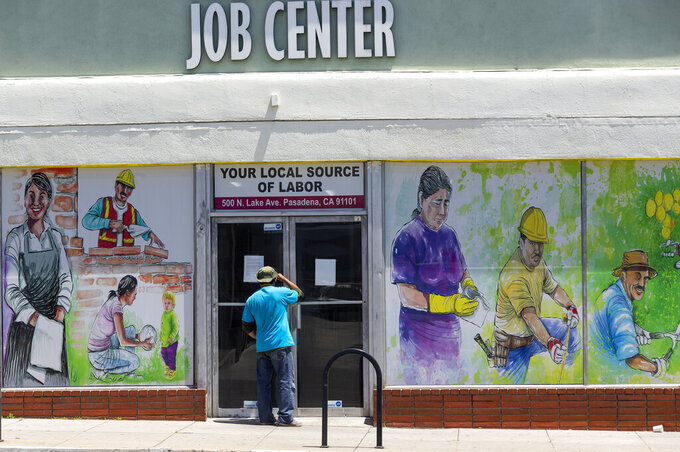 FILE - In this May 7, 2020, file photo, a person looks inside the closed doors of the Pasadena Community Job Center during the coronavirus outbreak in Pasadena, Calif. California will stop giving unemployment benefits to people who are not actively applying for jobs, Gov. Gavin Newsom's administration announced Thursday, June 17, 2021. Federal law requires people who are out of work to be actively looking for jobs to be eligible for unemployment benefits. (AP Photo/Damian Dovarganes, File)

Federal law requires people who are out of work to be actively looking for jobs to be eligible for unemployment benefits. But the federal government let states waive that requirement during the pandemic because so many businesses were ordered to close.

California has waived its work-search rule since March 2020. But Thursday, the Employment Development Department said it would resume the requirement July 11.

The coronavirus pandemic's economic effects were so strong and so sudden that most states made significant changes to their unemployment benefits programs to accommodate the crush of new claims.

Since the pandemic began, California — the nation's most populous state with nearly 40 million people — has processed more than 20 million unemployment claims and paid out more than $128 billion in benefits.

Normally, the most money someone can get from unemployment benefits in California is $450 per week. But Congress has added an additional $300 per week on top of that because of the pandemic. That extra money won't expire until September.

But as coronavirus cases have fallen while more people are getting vaccinated, employers have said they are having a hard time finding people to work. In response, most states have already required people to look for work in order to be eligible for unemployment benefits. And 25 states have stopped paying the extra $300 per week in benefits in an attempt to prod people back into the workforce.

Newsom, who will likely face a recall election later this year, has resisted most of those changes. Earlier this month, Newsom said other states’ decision to end the extra $300 weekly benefit was based on “politics, not economics.”

This week, Newsom lifted most coronavirus restrictions on businesses, heralding it as the state's grand reopening. But data from the U.S. Department of Labor show around 2 million people are still receiving unemployment benefits in California.

Anecdotally, many employers have said they are having trouble finding workers. California's 45 workforce development boards, which aim to get people placed in jobs, say fewer people have been coming to them seeking work, according to Michael Bernick, research director for the California Workforce Association.

“Workers are not coming back to their job fairs in any significant numbers,” he said.

California has added more than 390,000 jobs since February. In April alone, California accounted for 38% of all new jobs added in the U.S. But that same month, California still had the second-highest unemployment rate in the country at 8.3%.

This story has been corrected to say the additional $300 benefit from the federal government is paid weekly, not monthly.