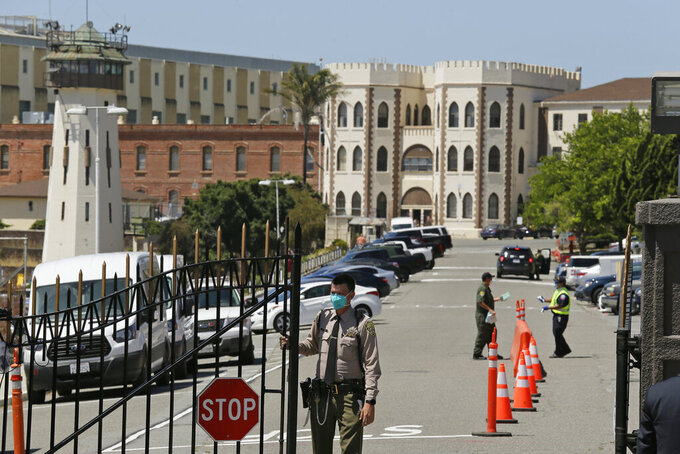 Ralph Diaz will retire Oct. 1 after 30 years with the California Department of Corrections and Rehabilitation.

The governor praised Diaz for overseeing “incredible transformation as well as unparalleled challenges” and said he had “truly met the moment.”

Some lawmakers and advocates have recently been far more critical, particularly after a botched transfer of inmates from a Southern California prison spread the coronavirus throughout San Quentin State Prison near San Francisco. Twenty-six inmates and a correctional sergeant have since died there, and more than 2,200 inmates and 276 staff were infected at the peak of the outbreak.

Assemblyman Marc Levine on Friday called the outbreak at state prisons “a preventable public health disaster and a failure of the department's leadership at the highest level,” leading to the deaths of 57 inmates and nine employees statewide.

“These infections and deaths are inexcusable,” he said, calling for “new leadership” and expressing the hope that Allison’s background in health care "will help her prioritize the public health needs of CDCR staff and incarcerated persons across California.”

State Sen. Mike McGuire last month also called the outbreak “a failure of leadership” but did not comment Friday. Both are Democrats, like Newsom, and represent the San Quentin area.

Protesters calling for widespread inmate releases to help slow the spread of the coronavirus have recently held vigils outside the homes of both Diaz and Newsom.

Newsom's announcement said Diaz had “worked tirelessly” to ease prison virus outbreaks, noting the number of infections is now at its lowest level since late May.

The state has sped the releases of more than 9,000 inmates who were nearing the end of their sentences as one response to the pandemic. It also halted admissions from county jails, with the combination lowering the prison population to levels not seen in 30 years.

That and other steps to significantly reduce and shorten prison sentences have led to criticism from law enforcement officials that the state is endangering public safety, and criticism from reform groups that it isn't going far enough.

For his part, Diaz cited the department's “transformative focus on rehabilitation” that he said “will continue to result in safer prisons, healthier communities, and lower recidivism.”

Allison, 55, of Sacramento, will be the third woman to lead the department, but the first to be designated “secretary” instead of “director.”

Ruth Rushen was director in 1980-1982 and Jeanne Woodford in 2004-2005, before what was then the Department of Corrections and the Youth and Adult Correctional Agency were reorganized into the current agency.

Allison started with the department in 1987 as a medical technician assistant, rising to warden, director of adult prisons and undersecretary of operations. Her new position pays $279,216 and requires Senate confirmation.

Newsom said he is confident that Allison will continue to focus on "rehabilitative opportunities for individuals both inside and outside of prison, and continuing the path for restorative justice.”

Jeff Macomber, 50, of Sacramento, who started as a correctional officer in 1992, will become undersecretary for operations on Oct. 1. That job pays $208,872 and also requires Senate confirmation.