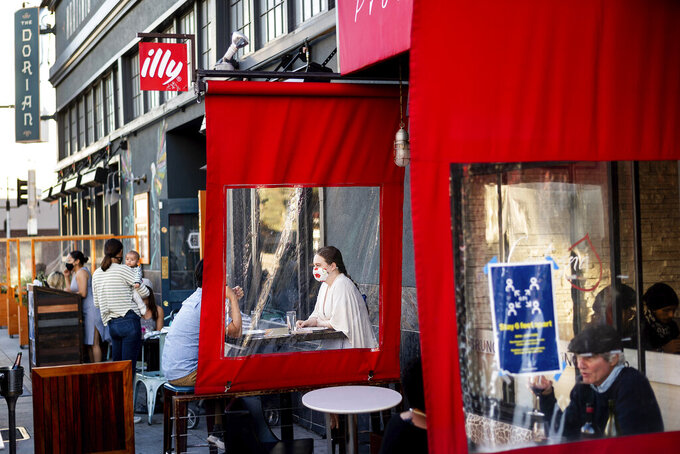 FILE - In this Oct. 21, 2020, file photo, people dine in San Francisco's Marina district. Gov. Gavin Newsom says California is slipping with an "obviously sobering" increase in coronavirus cases that may be partially linked to Halloween. He spoke Monday, Nov. 9, 2020, in Sacramento, California, as 11 San Francisco Bay Area health officers urged residents there to quarantine for two weeks if they venture outside the region. (AP Photo/Noah Berger, File)

SACRAMENTO, Calif. (AP) — California's coronavirus cases are at their highest levels in months, a disquieting reality Gov. Gavin Newsom said Monday was “obviously sobering" and that led San Francisco Bay Area health officials to urge people who travel outside the region to quarantine for two weeks upon return.

Newsom said some of the increase could be tied to Halloween celebrations while Barbara Ferrer, the health director for Los Angeles County, urged people who gathered during the weekend to celebrate Joe Biden's victory in the presidential race to quarantine to avoid fueling the spread.

“Recovery just doesn’t continue when you have thousands of new cases each day," Ferrer said. “And many of these cases stem from people taking risks that are frankly not appropriate. It isn’t that hard to play by the rules, especially since these rules are what keep some people alive and allow our economy to improve."

California hasn't seen the even more dramatic surges other states are experiencing but new figures are troubling. The number of confirmed cases, the infection rate, hospitalizations and intensive care patients all have reached their highest level in months, Newsom warned.

The positivity rate — the number of people who test positive — climbed from 2.5% to 3.7% in about three weeks, hospitalizations are 29% over 14 days and "that trendline continues up,” he said. Meantime, California is nearing two grim milestones: 1 million cases and 18,000 deaths.

The state updates every Tuesday its 58 counties' progress on a four-tier, color-coded system for reopening. The lower the cases and positivity rate, the fewer restrictions there are for businesses and certain activities in that county.

During the two months the system has been implemented most counties moved into less restrictive tiers. But this week's update is expected to see counties go the other way and have to reimpose restrictions, said Newsom and the state's top health official, Dr. Mark Ghaly.

In the San Francisco Bay Area, the case numbers generally are better than other heavily populated areas in the state and local health officials largely have tended to be more aggressive in their restrictions. Last March, the region was the first in the country to impose a stay-home order.

Now, health officials for 10 Bay Area counties and the city of Berkeley expanded a recommendation last week by San Francisco recommending residents self-quarantine when they return home to try to prevent a spike in coronavirus cases.

In a joint statement, the officials said people who insist on getting together for the holidays should keep their visits outdoors and lasting no more than two hours, and include a maximum of three households.

“This surge in COVID-19 cases is not what we want to see going into the fall and winter holiday season,” Santa Clara County Health Officer Dr. Sara Cody. Her county reported 358 new coronavirus cases on Sunday, second-highest during the pandemic.

Cody said the increase is largely among people between the ages of 18 and 34 and could be because people are letting their guards down on safety measures such as wearing masks and staying socially distant.

Newsom said the state's increase may be linked to Halloween, but more broadly appears tied to larger social gatherings.

County health officials where cases are rising uniformly cite “private household gatherings as a major source of spread,” Ghaly said. “These masks, even with loved ones that we haven't seen for a while, are really important, and that sense that we're safe because we know someone is not the case with COVID.”

Newsom said California’s positivity rate is still far better than those in many other states that have seen cases spike in recent weeks. California is well-positioned in stockpiling protective gear for health care workers, he said, and even with the increase coronavirus cases make up just 4% of hospitals’ capacity.

Yet aside from unmasked family gatherings, the upcoming holidays and simultaneous flu season, Newsom injected a new worry: That people will drop their guard because of positive news regarding testing of coronavirus vaccines, most recently Pfizer Inc.’s announcement that its version may be 90% effective, based on early and incomplete test results.

“This vaccine is not going to be readily available for mass distribution ... likely well into the next year,” he said. "I am concerned, truthfully, that we may get overexuberant ... and people may go back to their original form. That would be a terrible mistake.”