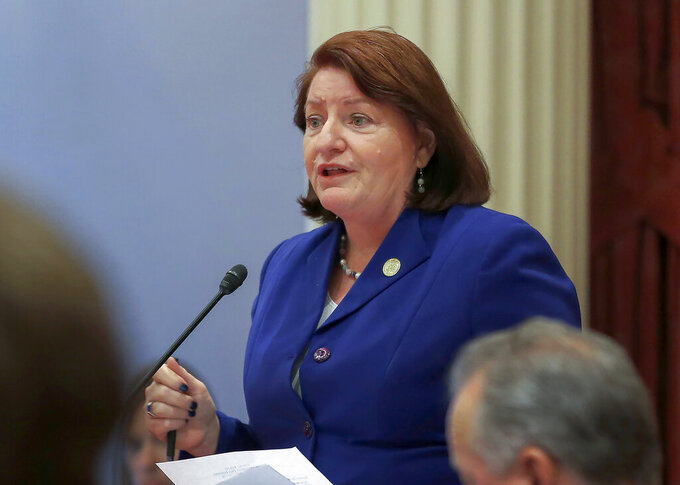 FILE - In this Sept. 12, 2019, file photo, California state Senate President Pro Tem Toni Atkins of San Diego speaks on the floor of the Senate in Sacramento, Calif. Democrats in the California Senate have proposed $3.4 billion in new spending to combat the state's drought. The proposal would equal all of the state's combined spending during the previous drought, according to the independent Legislative Analyst's Office. Atkins said the state needs to take advantage of a surprise state surplus and billions of dollars in new federal funding to prepare for drought. The most recent drought lasted about five years and ended in 2016. (AP Photo/Rich Pedroncelli, File)

SACRAMENTO, Calif. (AP) — Mired in yet another drought that threatens drinking water, endangered species of fish and the state's massive agriculture industry, Democrats in the California Senate on Thursday detailed a $3.4 billion proposal designed to gird the state for a new crisis on the heels of a deadly and disruptive pandemic.

The proposal would equal all of the state's combined spending during the previous drought, which lasted from 2012 to 2016, according to the Legislative Analyst’s Office. That drought occurred after the Great Recession, when California routinely battled multibillion-dollar budget deficits and struggled to pay for state services.

But this year, California is flush with cash after the forecasts of damaging deficits because of the pandemic never came true. Nine months into California’s fiscal year, the state has so far collected $16.7 billion more in taxes than it had predicted. In addition, the federal government has sent the state $26 billion as part of a coronavirus relief package with broad authority on how to spend it.

“We live in an unprecedented time and ... I think we shouldn't have unprecedented patience," said Senate President Pro Tempore Toni Atkins. “We really have an opportunity now and we should take advantage of it.”

California gets nearly all of its rain and snow in the winter and early spring. But this year, snowpack in the Sierra Nevada mountains is less than half of normal while most of the state is well below their normal precipitation amounts.

The Senate proposal does not include money for big projects, like building new reservoirs or repairing canals in the Central Valley. Instead, the money would bolster projects and programs the state is already doing, setting them up for the dry, hot months ahead.

“We've been working with them to identify noncontroversial early action projects that will assist now — not six months from now, not a year or two or three years from now,” said Danny Merkley, director of water resources for the California Farm Bureau. Merkley said he was involved in the discussions and he is “encouraged” by the proposal.

The Senate, Assembly and Gov. Gavin Newsom’s administration would need to agree on any new spending. Newsom will reveal his updated budget proposal next month. Assembly Democrats updated their “budget blueprint” on Wednesday to include “increased investments” in things like “drought resiliency” and clean water. Assembly Speaker Anthony Rendon said Thursday he looks forward to negotiating with Newsom and Senate leaders on a final proposal.

About $285 million would be spent protecting fish and wildlife from the drought, including the state buying back water from farmers so it can be returned to the Sacramento and San Joaquin river delta, reducing the salinity of the water and making it safer for fish. It would also spend money on monitoring the salmon, which must swim up the state's drought-depleted rivers to spawn.

But John McManus, president of the Golden State Salmon Association, worried the proposal didn't do enough for the state's endangered fish species.

“All the technology in the world so far is only delivering to us the best documented extinction of native species,” he said, referencing the delta smelt, a small fish native to California that some scientists say is practically extinct in the wild.

About a third of the money, or $1 billion, would pay off the accumulated debt of unpaid water bills in the state, a problem caused by pandemic-induced economic downturn. That money comes from the federal government, part of the $1.9 trillion coronavirus relief package President Joe Biden signed in March.

The rest of the money would come from a variety of sources, including state tax dollars.

About half a billion dollars would pay for things like trucking emergency water into cisterns for small communities, rural storage tanks, and construction to connect smaller water systems to bigger ones to ensure access to potable water in summer.

About $75 million would pay for things like remote sensors and gauges to measure snow and rain to help officials make decisions about how much water they should keep in reservoirs. That money includes $15 million to help the state better predict atmospheric rivers — the long, narrow bands of water vapor that form over the ocean and flow through the sky.

This phenomenon creates between 30% and 50% of annual precipitation on the West Coast of the United States, so knowing when and where they will occur can help officials plan on how to capture and store that water and better manage reservoirs.

About $500 million would pay for things like grants so homeowners and local officials can replace grassy lawns and medians with landscapes that rely on little or no water. The money would also help farmers upgrade their irrigation systems to be more efficient.

Atkins, who lives in San Diego, said she and her spouse have already replaced their lawn to be more water efficient, although they did not take money from a state program.

“That's very clearly happening throughout communities in California because we understand what's at stake,” she said.