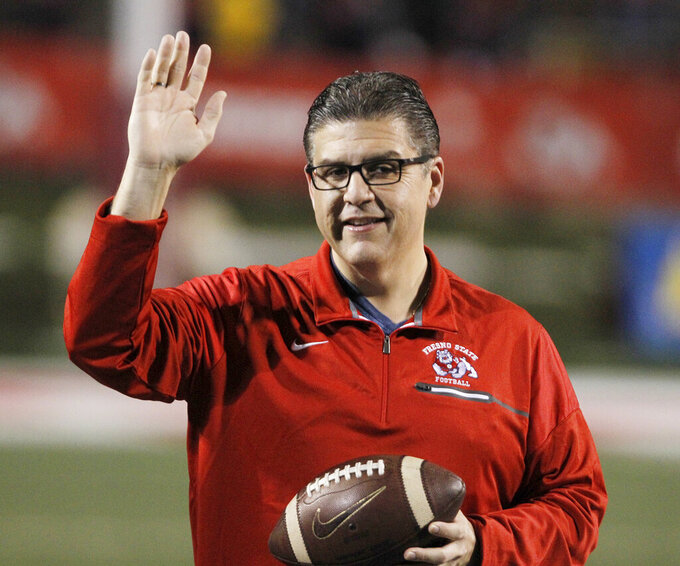 FILE - In this Nov. 4, 2017 file photo, Fresno State president Joseph I. Castro waves to the crowd before an NCAA college football game against BYU in Fresno, Calif. Castro was chosen to be the new chancellor of the California State University, becoming the first Mexican-American and native Californian to lead the nation's largest four-year public university system. The CSU Board of Trustees announced the appointment of Castro on Wednesday, Sept. 23, 2020. He will replace Chancellor Timothy White, who is retiring. (AP Photo/Gary Kazanjian, File) 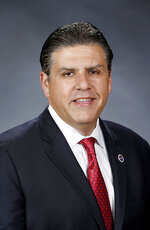 A seasoned university administrator, Castro, 53, has been president of CSU Fresno since 2013. Prior to that post, he spent more than two decades in a variety of leadership positions at University of California campuses, including as a professor of family medicine at the University of California, San Francisco, and vice chancellor of student academic affairs there.

A grandson of Mexican immigrants, Castro will lead the 23-campus system where Latino students are the largest ethnic group at 43% followed by 22% white students, 16% Asian and 4% Black.

Raised by a single mother, Castro graduated from UC Berkeley with a bachelor’s degree in political science in 1988, and earned his master’s in public policy there two years later. He received a doctorate in higher education from Stanford University in 1998.

Castro thanked outgoing CSU President Timothy White for his mentorship and the board for its confidence in him as he takes over the system of 482,000 students and 53,000 staff and faculty.

“I’m excited and honored to be the first California native and first Mexican American to serve as a chancellor of the California State University,” he said. His voice quivered with emotion as he thanked his mother and his relatives, some of whom he said were watching a livestream of the CSU trustees' meeting. To his family he said, “I love you all.”

White held the post since 2012 and had announced he would retire in June but delayed stepping down to help steer the system through the early stages of the coronavirus pandemic.

Lillian Kimbell, chairwoman of the board of trustees, called Castro “the very embodiment of the CSU mission” and a “passionate and effective advocate” for students, the campus and the CSU system.

“He is a leader who inspires greatness in his students, his faculty and staff,” she said during the meeting. “He’s bold yet measured and collaborative, courageous and a proven innovator — but uncompromising in his core values.”

For the first time in California history, the leaders of its two largest public higher education systems are people of color. In July, Michael Drake became the first Black leader of the University of California system in its 150-year history.

Drake replaced Janet Napolitano in overseeing the sprawling, 280,000-student system that is dealing with issues of accessibility for Blacks and other minorities, along with slashed budgets and upended campus life because of the pandemic.

Castro is taking on CSU’s highest position at a time of historic disruption, with most classes online due to the coronavirus, widespread unemployment in the state and wildfires that have disrupted the lives of many California residents.

Castro said his top priority in the new job will be to continue CSU's “Graduation 2025" initiative, a focus of White's tenure, to increase four-year graduation rates and close equity gaps.

“We have many first-generation college students. And it’s vitally important that we serve them here and throughout the state as effectively as possible, so that would be the highest priority. And to do so safely during this pandemic is critically important," Castro said during a news briefing later in the day.

Castro said his great grandparents and grandfather emigrated to California about 100 years ago to work on the railroad and on land in the agricultural San Joaquin Valley.

“Like the majority of students that we serve at CSU, I was the first in my family to attend and graduate from a university,” Castro said at the meeting. “That’s a gift that I’ve been paying back, ever since. And I intend to continue paying that gift back over time as chancellor of the CSU.”