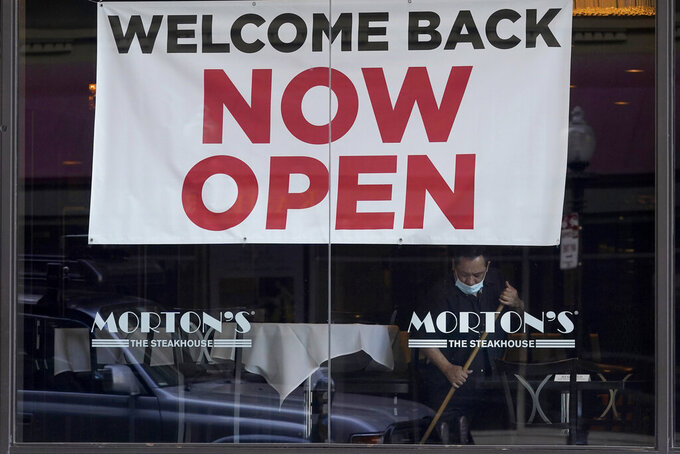 FILE - In this March 4, 2021, file photo, a sign reading "Welcome Back Now Open" is posted on the window of a Morton's Steakhouse restaurant as a man works inside during the coronavirus pandemic in San Francisco. California lost close to 70,000 jobs in January. But new numbers released Friday, March 12, 2021, by the state's Employment Development Department show the unemployment rate declined slightly to 9%. (AP Photo/Jeff Chiu, File)

SACRAMENTO, Calif. (AP) — California lost close to 70,000 jobs in January as the coronavirus pandemic stretched into the new year, but the unemployment rate dropped slightly as more people stopped looking for work amid another round of state-imposed lockdowns.

Numbers released Friday by the Employment Development Department show the nation's most populous state lost 69,900 jobs in January. Coupled with revised numbers from December, the state lost 145,300 jobs over those two months, slowing the recovery.

California has regained about 39% of the more than 2.7 million jobs lost in March and April 2020 when the pandemic took hold.

But since January 2020, more than 768,000 people have stopped looking for work, a number likely driven by the demands of caring for children during virtual learning and people seeking advanced degrees as they wait for the economy to improve. This past January, 36,500 people left the workforce, contributing to the unemployment rate falling to 9% from 9.3% in December despite the state posting a net job loss.

The biggest losses were in the leisure and hospitality sector, which includes restaurants and hotels that have been hit hardest by public health orders restricting travel and dining. The sector lost 70,600 jobs in January, and it's down nearly 800,000 jobs since January 2020.

While California forced restaurants to halt indoor and outdoor dining in December, many restaurants kept their employees into January, until they couldn't any longer, said Jot Condie, president and CEO of the California Restaurant Association.

“I think our workforce has been jerked around like no other workforce in the state,” he said.

The job numbers released Friday are based on surveys conducted the week of Jan. 12, when the state was averaging more than 50,000 new COVID-19 cases per day and hospital intensive care units were at full capacity in Southern California and the San Joaquin Valley.

Los Angeles County, the nation's most populous with more than 10 million residents, is set to ease restrictions soon that could allow limited indoor dining and movie theaters and gyms to reopen.

Meanwhile, more public school districts are announcing plans to get students back into classrooms, with the state having administered nearly 11 million doses of the COVID-19 vaccine.

“The vaccines are the best economic stimulus, allowing restrictions to ease,” said Sung Won Sohn, a professor of finance and economics at Loyola Marymount University. “There is a tremendous amount of pent-up demand, combined with improving weather, will allow the economy to grow more rapidly."

But that recovery hasn't shown up yet in the numbers. Job postings in California, a sign of employers' willingness to hire, declined the first week of March after a sharp increase in February. Unemployment claims increased by more than 16,000 last week, to 105,861.

“I think indications to me are that the recovery will be gradual, just because businesses in California are not talking about really gearing up,” said Michael Bernick, a former director of the Employment Development Department and an attorney with the Duane Morris law firm.

The wild card of California's recovery will be the impact of state and federal aid, Bernick said. The Legislature has approved $14.2 billion in state aid, including $600 payments to low- to moderate-income Californians, $2.075 billion in grants for small businesses and $6.6 billion for public schools to restart in-person learning.

President Joe Biden on Thursday signed a $1.9 trillion federal relief package. The California Department of Finance says the state will get more than $150 billion, with nearly half going directly to people through $1,400 checks and expanded unemployment benefits.

The UCLA Anderson Forecast, a closely watched economic outlook, predicted Wednesday that California's unemployment rate would be 7.7% for the first quarter of 2021.

Director Jerry Nickelsburg said that while the leisure and hospitality sector will be slow to recover, he expects a quick rebound in the business, scientific and technical services sector, especially as demand increases for new technology to support remote work.

“We expect the California recovery to ultimately be, once again, faster than the U.S.,” Nickelsburg said.

As the number of new COVID-19 infections decline, the state is relaxing rules in many counties that allow restaurants to resume indoor dining at 25% capacity. Condie of the California Restaurant Association said most restaurants can't break even until they have at least 50% capacity.

“It's just a matter of reducing the amount of money you're losing,” he said. “They are still hemorrhaging. It's going to allow them to hang on a little longer.”

This story has been corrected to say $2.075 billion is available for business grants, not $2.6 billion.