California will allow fans at pro sports but not Disneyland 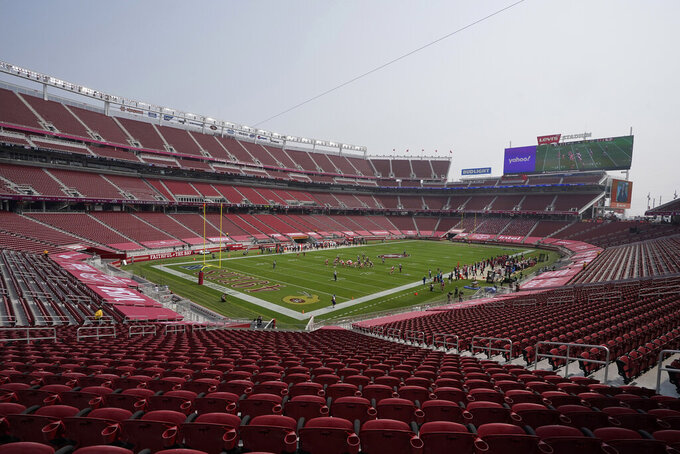 FILE - In this Sept. 13, 2020, file photo, empty seats are shown at Levi's Stadium during the first half of an NFL football game between the San Francisco 49ers and the Arizona Cardinals in Santa Clara, Calif. California health officials announced Tuesday, Oct. 20, 2020, that they will allow a limited number of fans to attend professional sporting events in counties with lower rates of transmission of the coronavirus. That includes Santa Clara County, home to the San Francisco 49ers professional football team, but health officials there said they won't allow fans at such events anytime soon. (AP Photo/Jeff Chiu, File)

San Francisco and neighboring Alameda and Santa Clara are the only counties that meet the threshold for pro sports. However, immediately after the announcement officials in Santa Clara, home to the San Francisco 49ers, issued a statement saying they weren't prepared to allow even a limited number of fans into Levi's Stadium.

Major theme parks, on the other hand, strongly objected to the state's restrictions, saying they could safely operate even with thousands of people in attendance.

As many as 14,000 people could attend Levi's Stadium events under the state's guidance, setting up the chance of devastating “superspreader” events, said Dr. Jeff Smith, Santa Clara County's executive officer.

“It’s a matter of reasonable scientific decision-making instead of political decision-making,” Smith told reporters. “Putting an audience in a stadium in large groups is just asking for trouble. It’s like a petri dish.”

Being outdoors isn’t enough to guarantee the virus won’t spread, he said, because fans would be using the same restrooms and same doors to enter and leave the stadium, while screaming and yelling during the game.

The 49ers said the team welcomed the news from the state but “will continue to collaborate with local public health officials to implement a plan that ensures a plan that protects the health and wellness" of the team, its employees and the public. Many NFL teams in other states have been playing games with fans in the stands.

Under the state rules, pro sports teams could have limited capacity at outdoor stadiums if they are in a county in the lowest two levels of the state's four-tiered model for reopening. Only fans who live within a 120-mile radius may buy tickets.

No county in Southern California has reached those tiers, so fans of the NFL's Los Angeles Rams and Chargers are still on the sidelines.

Major theme parks weren't happy that the state is limiting re-openings. Places like Disneyland and Universal Studios won't be allowed to reopen until their home counties reach the lowest tier, which has high hurdles including a sustained infection positivity rate under 2%.

Smaller venues will be allowed to open when their home counties are in the “moderate" category, but only with 500 patrons or at 25% of capacity, whichever is smaller, and only the outdoor attractions. Tickets must be sold in advance and restricted to residents of that county.

“We have proven that we can responsibly reopen, with science-based health and safety protocols strictly enforced at our theme park properties around the world,” Disneyland Resort president Ken Potrock said in a statement.

“This plan prolongs unemployment for tens of thousands of people, hastens bankruptcy for families and small business owners adjacent to parks, and contributes to insolvency for local governments whose budgets rely on parks as an anchor economic driver," added California Attractions and Parks Association executive director Erin Guerrero.

Disney World in Florida has been open since summer, but Dr. Clayton Chau, Orange County’s public health officer, told supervisors it could take the California county of 3.2 million people until next summer to reach the state's most lenient restrictions, and only after there is a vaccine.

Dr. Mark Ghaly, the state health secretary, said the goal for both sporting events and theme parks is to keep the crowds small and regional, without allowing visitors to swarm in from other areas and increase the risk of exposure and spread of the pandemic.

Ghaly said large theme parks “might have thousands of visitors coming together from a broad geographic area, not just the local community but from other parts of the nation and sometimes even the globe.”

That plus other prolonged contact not only in the parks but at surrounding hotels and restaurants, he said, “may be just enough to create outbreaks and transmission risks that California just doesn’t want to see.”

Ghaly said the easing of restrictions in San Francisco on Tuesday is proof that urban areas can progress.

San Francisco is the first highly populated county to move into the state’s lowest tier for infections. All the other counties at that level are rural areas scattered near the Oregon border or in the Sierra Nevada mountain range.

“Thanks to everyone’s commitment to wearing face coverings and following public health guidance, we are able to keep moving forward with reopening,” Breed said in a statement.

Former mayor and now U.S. Sen. Dianne Feinstein said the advancement is remarkable in part because of the recent increase in cases in other parts of the country.

“For one of the biggest cities by population density in this country to have such success shows that we can get this virus under control, but only if everyone plays their part," Feinstein said.

Butte and Napa counties improved from the “substantial” to “moderate” tiers on the state's four-stage system, while Riverside County in Southern California and Shasta County in far Northern California regressed to the most restrictive tier that requires several types of businesses including restaurants and gyms and places of worship to move outside.

The state will now allow all personal care services to operate indoors with appropriate safeguards. That adds tattoo, hair removal and massage businesses to the same category as hair and nail salons.

California has recently been able to keep its transmission rate low while numbers rise across most of the nation, though Ghaly warned that a state model shows California could see a 46% increase in hospitalizations in another month. Hospitalizations now are at levels not seen since early April.