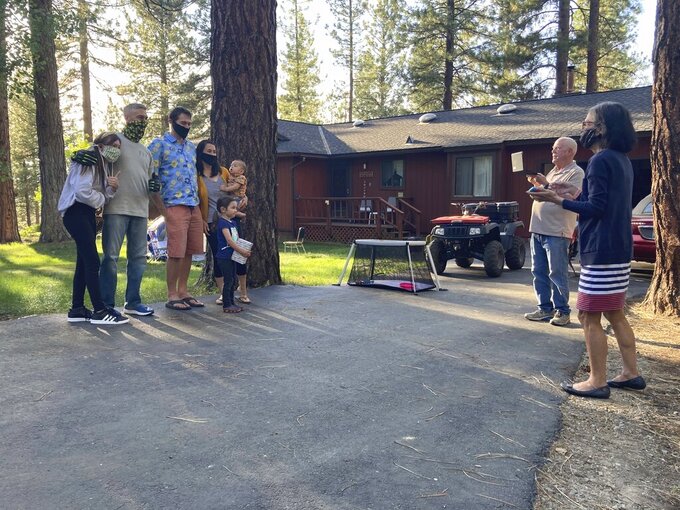 Vivian Filipic, 4, poses for grandparents Keith Mickelson and Alyce Wong Mickelson to take her picture with a gift-wrapped toy motorcycle brought as a present a day before her fifth birthday by Craig Fierro, second from left, and his daughter Scarlett Fierro, left, along with her father, Filip Filipic, and mother, Kirsten Mickelson and brother Luka Filipic, 9 months, on Friday, June 19, 2020, in Truckee, Calif. Craig Fierro, who owns a motorcycle shop in the city, has brought dozens of the toys to local kids during the coronavirus pandemic over the last two months to brighten their birthdays during shelter-at-home and social-distancing directives. (AP Photo/Peter Orsi)

Something must be done, he thought, to ease the disappointment. He found that something in his store.

At MotoSport Express Truckee, Fierro sells motorcycles, ATVs, snowmobiles and watercraft. But he also carries brightly colored toy replicas of the bikes, retailing for around $20.

“Anytime the kids come in the shop, it always catches their eye,” said Fierro, 45. “And I thought, man, it would be neat just to hand out those as gifts to kids right now because they can’t get all their friends over ... and at least maybe to put a smile on a face, you know even for just 10 minutes.”

In April he posted an invitation on a Facebook community page: Anyone with a kid with an upcoming birthday could send him the name, date and address, and he’d drop off a present.

Fierro’s 9- and 13-year-old daughters help wrap the bikes and accompany him on deliveries in his blue-and-cream, 1964 VW Beetle.

Sometimes he’ll leave a toy on the porch; other times he gets to meet the family, hand it off in person, wish the kid happy birthday and stay a few minutes for a distanced chat.

On a recent evening after work, Fierro and his elder daughter presented a blue-and-white replica of a Yamaha YZ450F dirt bike to Vivian Filipic, who was turning 5 the next day.

Last year she had a huge party with about 30 kids. This year only five people would be helping her celebrate: her parents, brother and grandparents.

The family has been in stay-at-home mode since March; Vivian has been lonely without pre-school or friends around, just 9-month-old brother Luka, who is too young to play.

She excitedly ripped the wrapping paper off, opened the box with a little help from dad, and set to vrooming it in circles on the asphalt driveway while the adults chewed the fat.

“It was so special ...,” said Vivian’s mother, Kirsten Mickelson, “I think it's great for the community.”

To start, Fierro had about 10 of the toys in stock, and it quickly became clear that wasn’t going to be enough. When he called parts distributor Western Power Sports Inc. to order more and told them what he was doing, they matched his order.

The give-away was supposed to run through May and be for children ages 5-10. But he’s ended up giving the toys to toddlers and even bigger kids, in their late teens. Deliveries are Truckee-only, but folks from elsewhere in Tahoe are welcome to drive to the shop and pick one up.

After his story was featured on a local radio station and in the Sierra Sun community paper, more requests flooded in.

By then Truckee and surrounding Nevada County were easing the coronavirus lockdown, but he decided to keep the effort going for another month. He put out a call online for June birthdays, and at last count he’d delivered about 50 toys.

Fierro said he believes in volunteering for his community. And ultimately, a former boss once taught him, he depends on neighbors for his livelihood.