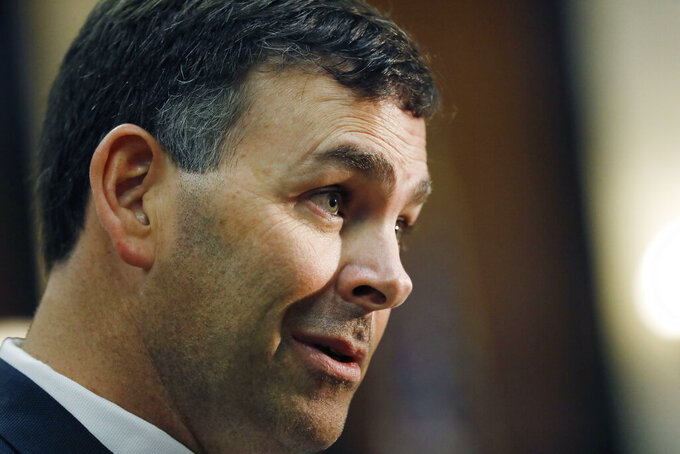 Secretary of State Michael Watson speaks to members of the Senate and House Elections Committees during a joint hearing at the Mississippi State Capitol in Jackson, Miss., Wednesday, June 3, 2020. (AP Photo/Rogelio V. Solis)

JACKSON, Miss. (AP) — Mississippi's top elections official is reminding people not to wear campaign clothing when they go to vote, because that is banned by state law.

Secretary of State Michael Watson said the state also prohibits people from campaigning for or against candidates or issues within 150 feet (45 meters) of polling places. And, he said, people are not allowed to take photos of their own ballots.

Polls are open 7 a.m.-7 p.m. on Tuesday. People who are already in line at 7 p.m. Election Day are allowed to stay and vote, Watson said.

In addition to the presidential race, the Mississippi ballot has races for the U.S. House and Senate and state Supreme Court positions. The ballot also has competing proposals that would legalize medical marijuana and a proposal to eliminate an electoral college-type provision that's used in electing the governor and other statewide officials.

Mississippi voters will also get to vote yes or no on a proposed design for a new state flag that features a magnolia encircled by stars and the phrase, “In God We Trust.” The flag election is happening months after legislators retired the last state flag in the U.S. that included the Confederate battle emblem that's broadly condemned as racist.

“We are focusing on having a clean and safe precinct environment,” Watson said Monday.

Mississippi allows curbside voting for people who have disabilities and for those who have been diagnosed with COVID-19 or are showing symptoms of it.

Several counties have moved precincts this year. Watson said people can check their precinct location by calling the local circuit clerk or by going to the secretary of state's yallvote.ms website.

Watson said 248,335 absentee ballots had been requested and 231,031 of those had been completed and returned by Sunday. That compares to the roughly 103,000 total absentee ballots that were cast in the state during the 2016 election, the last time a presidential race was on the ballot. This year’s absentee numbers surpassed the 2016 numbers two weeks ago.