Can Ovechkin catch Gretzky? 'The Great One' rooting for him 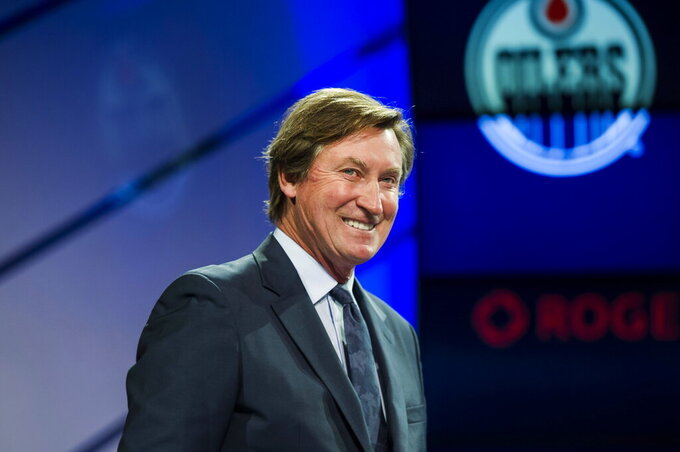 FILE - In this Dec. 10, 2017, file photo, former Edmonton Oilers great Wayne Gretzky speaks to media about the upcoming NHL Centennial Greatest Team celebration hockey game and being voted the greatest team of all time in Toronto. Possibly losing as many as 13 games with the NHL on hold because of the coronavirus pandemic could leave Alex Ovechkin two short of another 50-goal season and threaten his ability to break Gretzky’s all-time record. (Christopher Katsarov/The Canadian Press via AP, File)

Wayne Gretzky sees a lot of himself in Alex Ovechkin, from the smile on his face each time he steps on the ice to his passion for scoring goals.

There are also differences, like Gretzky's sole focus on the NHL growing up in Brantford, Ontario, versus Ovechkin's upbringing in Moscow. “The Great One” believes the Washington Capitals captain has a good chance of breaking his all-time record of 894 goals that once seemed untouchable, depending on how long Ovechkin plays in the NHL. Gretzky speculated that Ovechkin could go home to Russia and finish his career in the Kontinental Hockey League.

“Maybe one day in his mind he’ll say, ‘Look, I want to go home and play in the KHL when I can still compete at a high level,’” Gretzky told The Associated Press in a phone interview Sunday. “We don’t know that. That’s his decision. But I think he loves being in Washington, I think he loves the NHL and I think he’ll do everything he can at any point to chase down the record.”

Ovechkin's longevity and his pursuit of Gretzky's record are among the topics they discussed in their first joint interview, which airs Monday on NBC Sports Network. It comes with them 3,000 miles away and hockey on hiatus because of the coronavirus pandemic but shines a spotlight on the potential of Ovechkin, who has 706 goals, spending the next few years chasing Gretzky.

Ovechkin has 48 goals this season, tied for the league lead with Boston's David Pastrnak, and if the regular season were to resume, he could match Gretzky and Mike Bossy with nine 50-goal seasons. If not, the time away and focus on the chase could drive Ovechkin to play long enough to break the record.

“You really feel like this record is meaningful,” NHL chief content officer Steve Mayer said in a video interview with The AP. “I’ve got the feeling that if he’s close, he’s not going to go away so fast.”

When asked how long he’d play, Ovechkin has repeatedly referred to the one year remaining on his contract and said, “We’ll see.” He answers the same to NBC’s Kathryn Tappen during the hour-long special with Gretzky and adds: “I’m healthy, thanks God, and I still love this game. As soon as I’m not gonna love this game, I’m not gonna cheat on it because I respect it a lot.”

Gretzky knows that feeling and was even offered a job to play in Russia in 1999 after playing his final NHL game. He respectfully declined.

“All I remember was my mindset was there’s one league and if I’m not good enough for this league, I’m done,” Gretzky said. “I grew up, I’m an NHL guy and if I can’t play in the NHL, that’s it for me. He’s probably in a different scenario. He grew up in Russia and he’s proud of his country and maybe it’ll be great for him to go home."

At 35, Ovechkin has already blown past the age where goal-scorers usually slow down and put up numbers not seen in decades. Even at his pace, Ovechkin would likely need to play at least four more seasons to threaten the record, which Gretzky believes would be great for the game.

Gretzky recalls his dad telling him his record will be broken one day and hoping he handles it with the same class and dignity Gordie Howe did when Gretzky surpassed him as the leading goal-scorer.

“I can't help but cheer and root for him each and every day,” Gretzky said. “I hope I’m the first guy who’s able to shake his hand when he does break my record.”

That's a hope for a few years down the line. With a pandemic raging, Ovechkin — whose wife is expecting the couple's second child — said on a recent video call his focus is on the present, not the future.