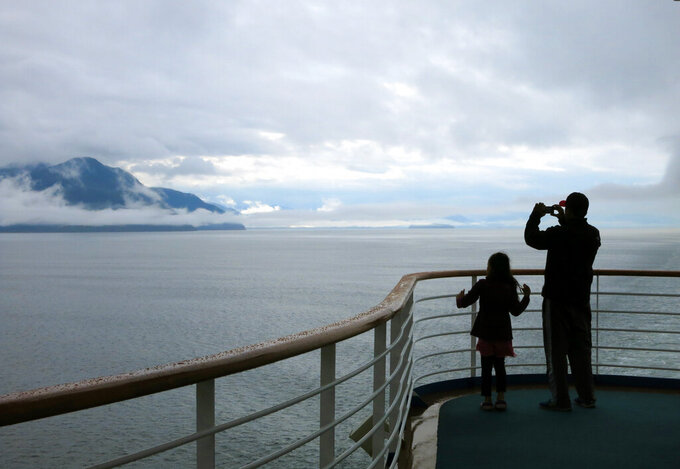 FILE - In this July 28, 2014, file photo, a cruise ship passenger takes photos of Alaska's Inside Passage. The Canadian government has extended a ban on cruise ships through February 2022, which is expected to block trips from visiting Alaska this year. Transport Canada announced the extension of the ban put in place because of the COVID-19 pandemic. (AP Photo/Kathy Matheson, File)

ANCHORAGE, Alaska (AP) — The Canadian government has extended a ban on cruise ships through February 2022, which is expected to block many ships from visiting Alaska this year.

Transport Canada on Thursday announced the extension of the ban enacted because of the COVID-19 pandemic. Canada blocked cruise ships of more than 100 passengers starting in spring 2020.

The ban was set to expire at the end of February, but Transport Canada said "cruise vessels in Canadian waters pose a risk to our health care systems."

Most large cruise ships visiting Alaska are registered in foreign countries. U.S. federal law prohibits foreign-registered ships from sailing between two American ports without stopping at a foreign port between. Large cruise ships bound for Alaska either begin voyages in Canada or stop there on the way.

Most of Alaska's 1.3 million visitors two years ago were cruise ship passengers visiting southeast Alaska. Many disembarked for excursions in Anchorage, Denali National Park and Preserve and Fairbanks.

Juneau City Manager Rorie Watt said he was not surprised by the extended ban, although he thought it might last a few months instead of the entire year.

The order could be rescinded if pandemic conditions improve. But Skagway Mayor Andrew Cremata did not see a possibility for relief for now.

“Any idea that there could be some kind of workaround is off the table now, because the Canadian government has stated very clearly that cruise ships will not even be allowed in Canadian waters,” Cremata said.

“We are going to be hoping and praying for a large federal stimulus package,” Watt said.

Alaska's Republican congressional delegation, in a statement, said Canada's announcement, “without so much as a courtesy conversation” with the delegation, was unexpected, unacceptable and “certainly not a decision made with any consideration for Alaskans or our economy. We expect more from our Canadian allies.”

The delegation is composed of Sens. Lisa Murkowski and Dan Sullivan and Rep. Don Young. In their joint statement, they said they were "exploring all potential avenues, including changing existing laws, to ensure the cruise industry in Alaska resumes operations as soon as it is safe. We will fight to find a path forward.”

Dan Blanchard, CEO of UnCruise Adventures, said the actions taken by the Canadian government will not affect his company's plans to provide trips in Alaska this year. He said his company has U.S. flagged vessels, staffed with U.S. crew. Sailings are expected to begin in May, he said, with plans to use six ships. The ships carry less than 100 passengers, he said.

Blanchard said while he will be able to operate, he is “deeply saddened” for the ships and businesses affected by the Canadian announcement.