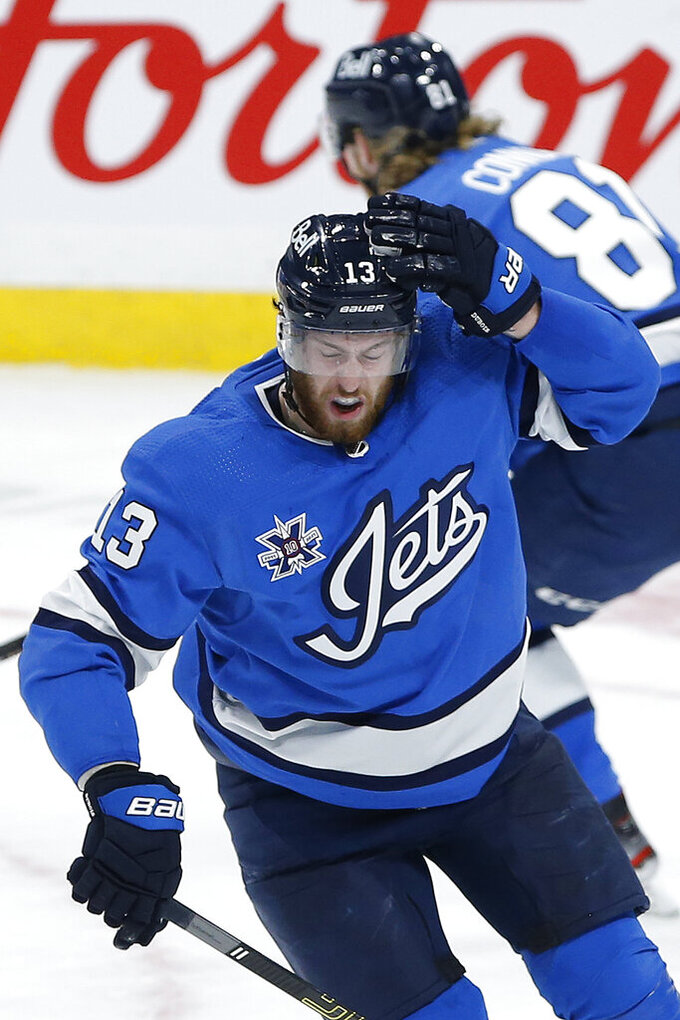 Winnipeg Jets' Pierre-Luc Dubois (13) holds his head after getting hit by a shot by Montreal Canadiens' Brendan Gallagher (11) during the second period of an NHL hockey Game, Wednesday, March 17, 2021 in Winnipeg, Manitoba. (John Woods/The Canadian Press via AP)

The Canadian Press reported Friday, citing two unidentified people with knowledge of the decision, that players will now observe a seven-day quarantine upon arrival in the country and be subject to daily testing for COVID-19. Players will then be eligible to suit up for their new teams while continuing to undergo daily testing the following week.

The people spoke to CP on condition of anonymity because details of the exemption have not been made public. Deputy Commissioner Bill Daly earlier Friday told The Associated Press the NHL had not yet received official word from the Canadian government about the reduction in quarantine time.

Players entering Canada during the season previously had to observe the standard two-week quarantine period with the border closed to non-essential travel due to the pandemic. That included Pierre-Luc Dubois when he was traded from Columbus to Winnipeg.

Eric Staal is the first beneficiary of the new agreement after being traded from Buffalo to Montreal on Friday.

The Public Health Agency of Canada said in a statement to The Canadian Press late Friday the five provinces with NHL teams — British Columbia, Alberta, Manitoba, Ontario and Quebec— have all “provided written commitment that they support the proposed risk mitigation measures from the NHL.”

“The Public Health Agency of Canada was consulted on the NHL’s plan and assessed it against public health criteria,” the statement said. “With the support of provincial and local public health authorities, PHAC concluded that, if fully implemented, it offers robust measures to mitigate the risk of importation and spread of COVID-19 in Canada for the purposes of in-season additions.”

The cut in quarantine time, which also applies to players called up from American Hockey League teams in the U.S., is a boost for Canada’s seven NHL franchises ahead of the trade deadline.