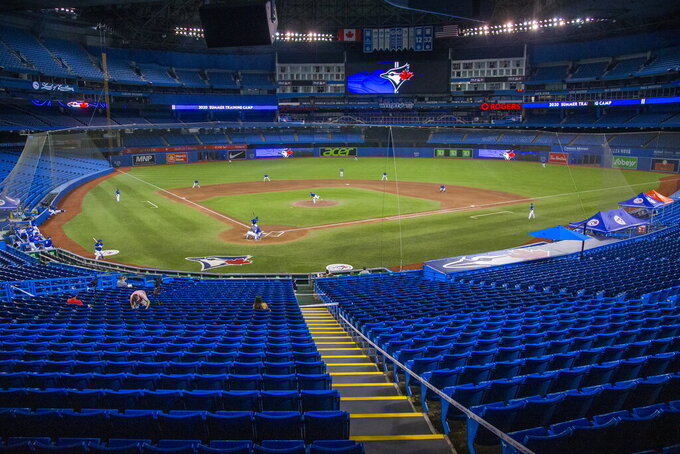 TORONTO (AP) — A top Canadian government health official says the Blue Jays might want to consider hosting an extended stretch of home games in order to get approval to play in Toronto amid the pandemic.

Dr. Howard Njoo, Canada’s Deputy Chief Public Health Officer, said Tuesday that back and forth travel from the United States, where coronavirus cases are surging, is a major issue that could prevent the government from approving Major League Baseball to play in Canada.

“The fact of the matter is today in Canada we’ve done a good job of flattening our curve. The situation doesn’t appear to be changing quickly in the U.S,” Njoo said.

Njoo noted Canada has been reporting about 300 cases per day compared to 60,000 per day in the U.S.

Njoo said discussions with the Blue Jays and MLB continue and the government is always open.

The Blue Jays are scheduled to open the season July 24 at Tampa Bay. Toronto's home opener is listed as July 29 against Washington.

“We’re seeing what’s in the realm of possible,” Njoo said. “I could get myself in trouble but I’m going to say it anyway. Look at the epidemiology of COVID-19 in Canada. I know the schedule has already been set for the Blue Jays, but in trying to respect the quarantine and keeping players safe, I don’t know, maybe one option is the Blue Jays staying in Canada for an extended period of time and playing a quite a long series of games.”

Such a change would require a change in MLB's schedule and would mean opposing teams flying to Canada for what would have been home games in their home ball parks.

MLB requires an exemption to a requirement that anyone entering Canada for nonessential reasons must self-isolate for 14 days. The U.S.-Canada border remains closed to nonessential travel and the two countries are poised to extend their agreement to Aug. 21, but a final confirmation has not been given, a person familiar with the matter said Tuesday.

The agreement would likely extend the closure by another 30 days. The official was not authorized to speak publicly ahead of an announcement this week, and spoke on condition of anonymity.

Governments in Canada allowed the team to move their summer camp from their training complex in Dunedin, as the Blue Jays created a quarantine environment at Rogers Centre in Toronto and the adjoining Toronto Marriott City Centre Hotel, which overlooks the field. Players are not allowed to leave the stadium or hotel and face fines or jail time if they do.

Njoo reiterated that the regular season is a “totally different ballgame” because it players to frequently travel back and forth between the United States.

Blue Jays President Mark Shapiro has said visiting teams would not leave the confines of Rogers Centre and the hotel attached to the stadium if the regular season plan is approved.