Canadiens shut down Senators for 4-1 win 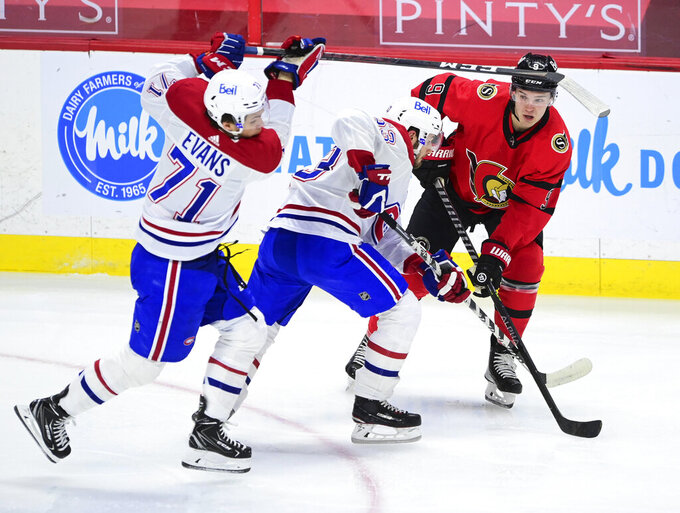 OTTAWA (AP) — Jake Allen made 22 saves, Phillip Danault and Brendan Gallagher each had a goal and an assist, and the Montreal Canadiens defeated the Ottawa Senators 4-1 on Thursday night for their third consecutive win.

Paul Byron and Corey Perry provided the rest of the offense for Montreal, which blanked the Edmonton Oilers 4-0 some 48 hours earlier in the Canadiens’ return to action after a week off with two players in the NHL’s COVID-19 protocol.

Allen picked up his first victory since making 34 stops in a 2-1 win over the Senators on Feb. 6.

Connor Brown scored for Ottawa, while Filip Gustavsson made 34 saves. The Senators played for the first time since losing 3-2 to the Toronto Maple Leafs in overtime on March 25 thanks to a schedule break following the Canadiens’ COVID-19 issues.

Montreal won three straight for the first time since the end of January, and occupies the fourth and final playoff spot in the North Division, six points up on both the Calgary Flames and Vancouver Canucks, with four games in hand.

The Canadiens are also now just four points back of the Oilers in the standings, with four games in hand.

Ottawa, meanwhile, had its five-game point streak (2-0-3) come to an end in dropping to 3-3-0 against the Canadiens this season.

The teams were supposed to play Sunday in Montreal, but that game was the fourth of four contests postponed after Canadiens forwards Jesperi Kotkaniemi and Joel Armia went into COVID-19 protocol. One of the players in question tested positive for a variant of concern.

Montreal and Ottawa were also scheduled to hit the ice Tuesday in the nation’s capital, but that game was rescheduled to allow the Canadiens and Oilers, who were slated to play three times last week, to get in at least one of the postponed games.

After coming close early when Nick Suzuki hit the post, Montreal opened the scoring at 10:48 of the first period on a lucky break. Gallagher’s initial shot from the right side pinballed off Ottawa center Colin White and defenseman Thomas Chabot in front to Danault, who fired his third of the season into a wide-open net.

Without a goal in his past eight games coming into Thursday, Senators rookie Tim Stutzle was flying early with a couple of slick setups that just failed connect before a nice individual effort that Allen turned aside.

Ottawa got a power play that stretched from the end of the first into middle period, but the Canadiens doubled their lead 48 seconds after the break when Byron took a pass from Evans and backhanded his third goal upstairs on Gustavsson following some poor coverage in the Senators end.

The goal was Montreal’s league-leading eighth short-handed goal of the season, and first since the 11th game of the season.

The Senators had an excellent opportunity to get back within one, but Allen, who played for the first time since March 19, made a desperation stick save on Brady Tkachuk.

Suzuki then moved in alone on a breakaway only to have both his initial shot and rebound effort stopped by Gustavsson as the visitors led by two through 40 minutes.

Montreal winger Josh Anderson hit another post early in the third, but Perry scored his seventh of the season, and fourth in the past nine games, upstairs to make it 3-0 at 4:43.

Gallagher scored at 10:04 with his 14th, and third in as many games, off a pass from Danault to make it 4-0 before Brown broke Allen’s shutout bid with under two minutes to go on a power play with his eighth.

NOTES: White left the game with an upper-body injury in the second period. ... Montreal will play a total of 17 games in April. ... Ottawa announced the team has signed defenseman Jacob Bernard-Docker, a first-round pick in 2018, and center Shane Pinto, a second-round pick in 2019, to three-year entry-level contracts. The University of North Dakota products will report to the Senators following a quarantine period. ... Tatar assisted on Danault’s opener to extend his point streak to five games.

The teams wrap up the two-game home-and-home set at Montreal on Saturday night.