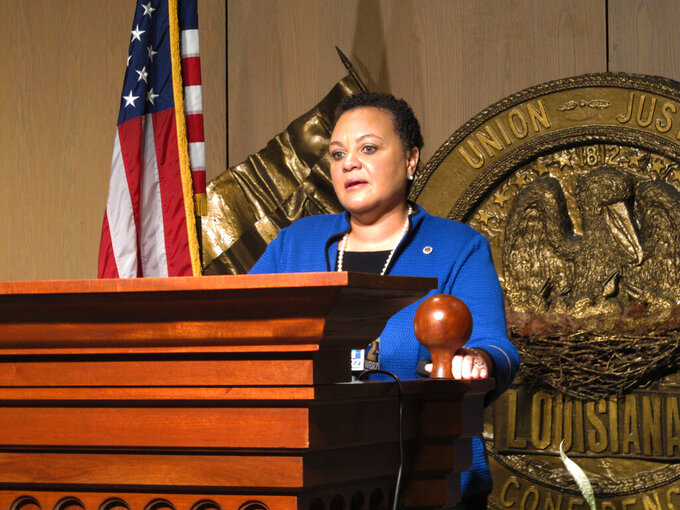 State Sen. Karen Carter Peterson, D-New Orleans, speaks about her campaign for the 2nd Congressional District seat after signing up for the race on Wednesday, Jan. 20, 2021, in Baton Rouge, La. The seat is vacant because former U.S. Rep. Cedric Richmond resigned to work for the Biden administration. (AP Photo/Melinda Deslatte)

The special elections come only months after voters filled the seats in November and December competitions.

The New Orleans-based 2nd District seat is open after Cedric Richmond, a Democrat, left the position he'd held for five terms to work for President Joe Biden's administration. The 5th District seat, which covers a largely rural portion of the state and the cities of Monroe and Alexandria, is unfilled because Luke Letlow, a Republican newly elected to the job, died from COVID-19 complications before he could be sworn in to Congress.

Five candidates have signed up for each competition so far. Qualifying runs through Friday.

Two prominent Democratic contenders for the 2nd District seat — Troy Carter and Karen Carter Peterson, both state senators from New Orleans — filled out their paperwork and paid their qualifying fees shortly after registration opened on a day where the nation's attention was focused on Biden's inauguration in Washington.

Peterson talked of the historic importance of Kamala Harris entering the vice president’s job, and Peterson noted her standing as the only Black woman running for a congressional delegation that currently features all men.

“When women are not at the table, they’re on the menu,” she said.

Also in the race is Gary Chambers Jr., a Baton Rouge Democrat, community activist and local publisher who gained prominence during the protests of the 2016 shooting death of Alton Sterling by local police. He, too, noted the “magnitude of the moment” he chose to register for the ballot.

“At the end of the day, relationships matter," Carter said. "As a new congressman, I will have the ear of the guy who has the ear of the president of the United States.”

Both he and Peterson described their legislative service as selling points. But Carter said his local government tenure and his decade away from government work give him a broader perspective.

Peterson, a former chair of the Louisiana Democratic Party, cited her bonafides on progressive issues and her willingness to “sometimes shake things up.”

“I've been fighting for working-class families,” she said. “That is what is needed at this moment in the pandemic.”

Chambers said the next congressman needs to work on bringing jobs to Louisiana to help combat crime.

In the 5th District competition, the highest profile candidate — Letlow's widow, Julia — intended to register for the race Thursday. Julia Letlow, a Republican who lives in Richland Parish, announced her campaign last week, saying she wanted to continue the work her husband started.

Luke Letlow died Dec. 29, only weeks after winning the runoff election and days before he was scheduled to take the oath of office. He was going to fill the seat vacated by his one-time boss and his supporter, Republican Ralph Abraham.

Among those who qualified Wednesday was last fall's third-place finisher, Sandra “Candy” Christophe, a social worker and Democrat from Alexandria.

Another candidate from the 2020 election seeking the position again is Allen Guillory, an Opelousas Republican who supported Luke Letlow in the runoff and said he's worried about Julia Letlow's entrance into the race because of the Letlows' two young children. Guillory said if Julia Letlow wins the congressional seat, “those kids could lose two parents.”

Also on the ballot is a special election for a seat on the state Board of Elementary and Secondary Education representing northwestern Louisiana.