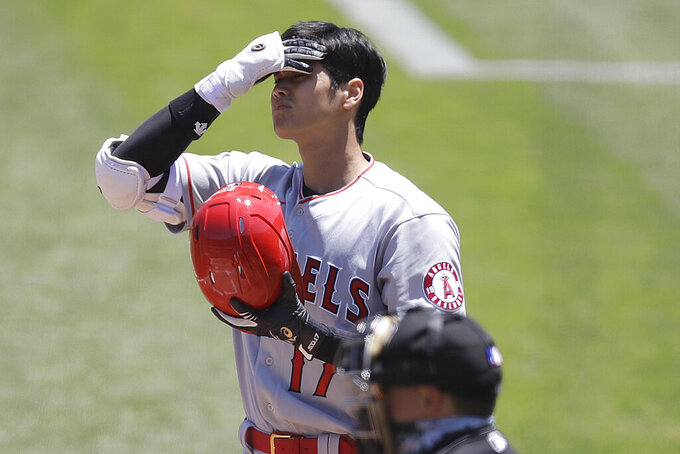 Angels shortstop Andrelton Simmons appeared to roll his left ankle when he ran out an infield single in the ninth and landed hard on the bag. He rolled onto the grass clearly in discomfort before exiting for a pinch runner. Manager Joe Maddon didn't have an immediate update afterward.

“I’ve just got to wait, we’ve got to see the doc, then I’ll get a report back from the medical staff,” Maddon said. “I don't know enough yet.”

As word spread around baseball about a coronavirus outbreak among the Miami Marlins that kept the club in Philadelphia, A's first baseman Matt Olson began wearing a mask at his position. Olson could be seen chatting with Mike Trout — also masked up — in the top of the eighth after the Angels star drew a walk from Jake Diekman.

A's manager Bob Melvin said it was important for his players to be even more diligent with safety protocols.

“I think today, I don't want to say it scared everybody, but maybe a little. This is kind of the thing you were hoping wasn't going to happen," Melvin said. “Today was a different level as far as how you think about it. We're not the only clubhouse that is probably thinking that way.”

Bassitt (1-0) worked out of a bases-loaded predicament in the fourth when he threw out Tommy La Stella at the plate to start an inning-ending double play. Bassitt, a 10-game winner last season who is in the rotation for now, pumped his fist as he walked off the field.

Ramon Laureano gave Oakland the lead on a sacrifice fly in the third before Matt Chapman's RBI double.

Yusmeiro Petit struck out David Fletcher in an 11-pitch at-bat to end the seventh. Joakim Soria allowed a pair of singles before closing it out for his first save, retiring Trout on a 93-mph called third strike that the slugger argued. He removed his batting helmet while speaking to plate umpire Adam Hamari. Maddon also had a word with the umpire.

“That pitch there we thought was high. I don’t know what it showed in the box, which sometimes is not accurate,” Maddon said. "But of course there was frustration. The guys are playing hard. We care. You’ve got the right guy up in the situation. And to get called out like that on a pitch that was questionable, it was bothersome. But you’ve got to put it away.”

Closer Liam Hendriks rested after recording a four-out save Sunday and pitching in Friday’s season opener.

The A’s took three of four from the Angels and won their opening series of a season for the first time since 2010, when they won three of four against the Mariners.

Shohei Ohtani went 0 for 4 with three strikeouts as designated hitter a day after failing to record an out during his first start on the mound in nearly 23 months. Slugger Albert Pujols, who at 40 made his 20th consecutive opening day start Friday night, singled in the second for his first hit of 2020 and wound up 1 for 12 with a walk during the series.

Right-hander Griffin Canning (0-1) surrendered Canha's drive to start the fourth just after the Angels' missed opportunity in the top half of the inning.

Slugger Khris Davis played his 355th game as Oakland's designated hitter, tying him for second most in A's history with Mitchell Page and trailing Dave Kingman's 428.

Angels: Maddon gave 3B Anthony Rendon one more day to rest his oblique injury. Rendon could make his Angels debut as soon as Tuesday in the home opener or at least by Wednesday. “He's trending properly and he should be ready to play relatively soon,” Maddon said.

The A's released RHP Daniel Gossett, who was designated for assignment Thursday, and added RHP Ben Bracewell to their player pool. He was assigned to the club's alternate site in San Jose.

RHP Daniel Mengden, in the rotation while left-hander A.J. Puk is sidelined by a strained throwing shoulder, makes his 2020 debut when the A's open a two-game home series with the Colorado Rockies. Angels lefty Patrick Sandoval pitches for Los Angeles in its home opener Tuesday night vs. Seattle.