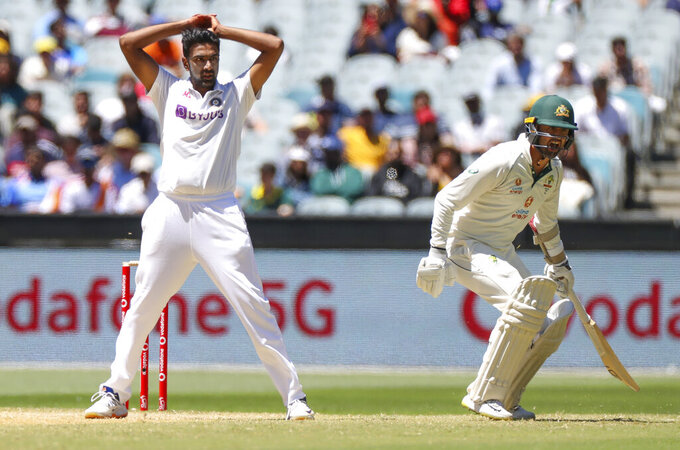 SYDNEY (AP) — The Sydney Cricket Ground capacity for the third test between Australia and India has been slashed to 25% because of a COVID-19 outbreak in New South Wales state.

While speculation rises about the fourth test being moved from Brisbane to Sydney from Jan. 15-19 because of the India squad’s concerns over going back into stricter hotel quarantine in Queensland state, Cricket Australia moved to reduce pressure on the third test starting Thursday by making further reductions to the crowd size.

The SCG had already been reduced to 50% capacity because of restrictions in place for the coronavirus pandemic and Cricket Australia has halved that again — to a crowd of less than 10,000 daily — after consulting with the state government and health authorities.

“Reducing the capacity of the venue is crucial in achieving social distancing requirements," Cricket Australia interim chief executive Nick Hockley said in a statement Monday outlining refunds and a ticket re-sale period. "To date, we have been able to deliver a safe and successful summer of cricket thanks to our detailed biosecurity protocols, the cooperation and support of public health officials and the hard work of so many people behind the scenes.”

The Australian Broadcasting Corp. said there was 188 active COVID-19 cases in the state.

The four-test series is level at 1-1 after India rallied from an opening loss in Adelaide to beat Australia by eight wickets in Melbourne last week. The teams were traveling to Sydney on Monday after reports all players and staff on both squads had returned negative tests for COVID-19. Travel restrictions are in place in cities and states across Australia.

Five India players were placed in precautionary isolation over the weekend while India’s cricket board investigated a potential breach of biosecurity protocols.

Rohit Sharma, Rishabh Pant, Shubman Gill, Prithvi Shaw and Navdeep Saini were all been placed in isolation after a video of them sitting at a table in a Melbourne restaurant was posted on the Twitter account of Navaldeep Singh.

Singh suggested on Friday he paid the bill for the table and then hugged Pant, although on Saturday Singh claimed there was no hug and players kept their distance.

The series is being played amid a backdrop of biosecurity rules, which will get stricter in Sydney.

Players and staff will be permitted to leave the official hotel but, if visiting restaurants or cafes, must dine outdoors.

The protocols have helped Cricket Australia, which requires exemptions from the Queensland state government for players to travel from Sydney to Brisbane for the fourth test next week, navigate the country’s latest COVID-19 outbreak.

Australia spin bowler Nathan Lyon on Monday said he was still expecting the series to move from Sydney to Brisbane for the fourth test, and blamed any speculation otherwise on fatigue with quarantining.

“There’s a few people from both squads who have been in a bubble for close to six months now but in my eyes it’s a very small sacrifice." Lyon said. “Let’s just suck it up and get on with it.”

Cricket Australia's Hockley said he'd had no indication from the Board of Control for Cricket in India "to suggest anything other than they’re supportive."

“We speak to our counterparts at the BCCI daily," he said. "Both teams have wanted to play the schedule as we’ve set out.

“We have clarified in the last 24 hours what the precise requirements are in Brisbane ... everyone is fully across that, and supportive.”