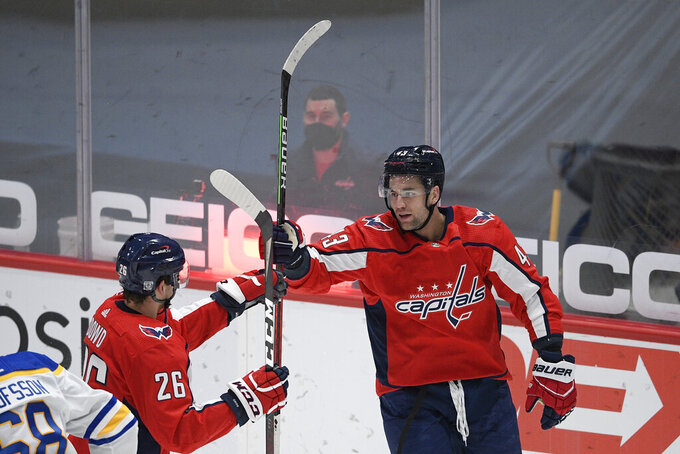 Backstrom's goal came on the power play in the first period, Wilson's short-handed in the second and Sheary at even strength in the third. Vanecek wasn't tested much until midway through the second but made a big stop on Kyle Okposo in tight late in the period and was strong overall in his 12th consecutive start.

“We didn’t really give them much,” Wilson said. "We’re feeling a little better about our game, so we got to keep that rolling and just keep the momentum going.”

Washington has rebounded nicely in the aftermath of a four-game losing streak. The Capitals followed their best 60-minute performance of the season Tuesday night at Pittsburgh with another consistent effort against a struggling opponent.

“Hopefully, it’s coming now,” Backstrom said. “We played a good game against Pittsburgh. We weren’t maybe as good tonight, but we got a win. That’s a good thing, and we’re just going to keep building.”

Victor Olofsson scored a power-play goal for Buffalo, which lost its fourth in a row and third since returning from a two-week shutdown for a virus outbreak. It was just the Sabres' third goal in three games and not enough support for Linus Ullmark, who allowed three goals on 21 shots.

Nic Dowd flanked Wilson on the 2-on-0 rush that led to the shorthanded goal but wanted no part of it. Not only did Dowd slow down to defer to Wilson, he actively asked him not to pass the puck.

BACKSTROM ON THE BOARD

Asked if he was doing anything differently on offense, Backstrom said: “Just the mindset of maybe going to the net a little bit harder. I think the coaching staff wants the team to play harder in front of the net, create a lot of shots and create those secondary chances.”

While Vanecek continued his run of starts, Ilya Samsonov practiced again with the American Hockey League's Hershey Bears following his second rehab start. The guy who was expected to be Washington's No. 1 goaltender allowed six goals on 52 shots in minor league action since recovering from COVID-19 and is set to rejoin the team, though coach Peter Laviolette didn't promise Samsonov would start this weekend with back-to-back games.

“I’m not going to go that far, but obviously we’ve got a busy schedule coming up, so I’m sure you’ll see him at some point," Laviolette said.

Buffalo is expected to be without defenseman Rasmus Ristolainen for its next three games while he continues to recover from COVID-19.

“You can see the writing on the wall, that he needs more space to get his energy level up,” said 61-year-old coach Ralph Krueger, who also contracted the disease as part of the team’s outbreak. "Every one of us that had COVID has a different pathway back. His will still take some time.”

The Sabres had nine players on the league’s COVID protocol list as recently as Feb. 12.

Sabres: At New Jersey on Saturday.