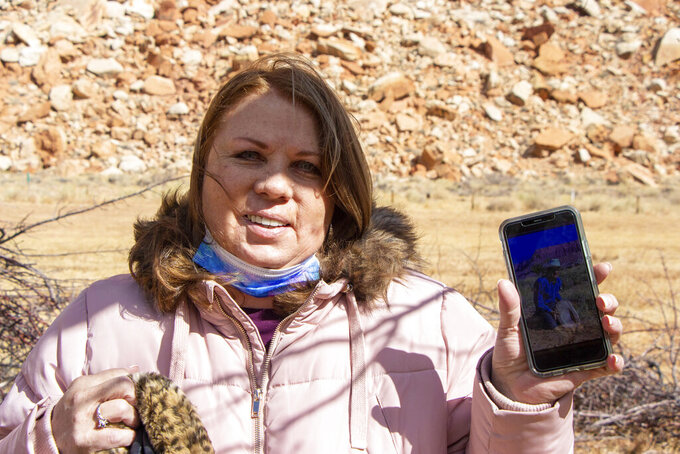 FRUITA, Utah (AP) — In one of the largest orchards in the U.S. National Park System, Utahns gathered on a windy Thursday morning to talk about fruit trees and how to move orchard operations into the 21st century while preserving their cultural history.

Capitol Reef National Park has nearly 20 orchards totaling dozens of acres across the Fruita historic district, a 19th-century Latter-day Saint pioneer homestead in the center of the park, the Spectrum newspaper reported.

The trees yield over 52 varieties of apricots, pears, cherries, plums and apples for all who come to Capitol Reef to pick and take home.

However, because of age, disease and soil conditions, the beloved fruit trees are producing less and dying quickly.

The peach harvest has been cut significantly, and in some places in the park, there’s just one type of tree left.

And with an ever-increasing number of visitors — there were close to 1 million last year, a new record — the park is looking for ways to bring back the once incredibly fruitful fruit trees.

In response to the decline, an average loss of 134 trees per year since 2015, the park held three public hearings on orchard rehabilitation in late February and early March to tap into the local love of the trees.

On Thursday, around 20 people from local towns and organizations walked through the Cook Orchard across from the Fruita schoolhouse to discuss the plans in detail with Park Horticulturalist Fritz Maslan, Superintendent Sue Fritzke, Utah State University agriculturalists and several park staff.

“There’s not a lot of places like this left in the world who use historic methods,” Maslan said. “This is just such a valuable thing for folks to come and experience with their kids.”

The project would start in September with regrading, or tilling the soil with nutrient-rich materials at an equal depth to cure aged soil compaction, re-establishing the historic furrows for flood watering and planting orchard grass.

In Spring 2022, the park would begin to plant 200 saplings in the Guy Smith orchard and would continue to plant 100 saplings each year until 2025.

Currently, the park is planning on replanting the historically utilized species of fruit trees but heard suggestions on using higher yield but appropriate trees instead to help with the high tourism level.

Another problem the orchards face is the deer population which will “scalp” the trees of all the fruit if they get the chance, so the park is vigilant in putting more sufficient fencing up for the first few years of the sapling’s life.

The main goal of the project is “balancing that historic character with the modern needs,” Maslan said.

In attendance at the meeting was Liz Pace, 59, of Bicknell, whose grandfather Worthen Jackson managed the Capitol Reef orchards when she was a child.

“I’m thrilled,” Pace said. “It’s been sad to me to see the decline. Everything has a life cycle. The trees have been dying and it didn’t seem like they had the resources to make improvements, so I’m tickled to see what they’re doing.”

After the meeting, Pace found a photo of the cliffs in the snow her grandfather took in almost the exact spot the meeting was held.

“It’s imperative not to forget about our cultural heritage,” she said. “Our children, our grandchildren and our great-grandchildren need to understand why people came and what kept them here, and gain a love for it like they had.”

Superintendant Fritzke said she’s seen an “enthusiastic response” over the three meetings and has perceived “a sense of relief” from the public that they’re tackling this issue.

“We are committed to preserving, protecting and restoring these orchards. I don’t think the community has felt like that for a long time. I think we within the park have always known this is a priority and now the public knows,” Fritzke said.

After years of research and gathering funding, Fritzke thinks now is the time to treat the trees.

This project is focused on specifically replanting the Cook and Guy Smith orchards, but this is just the beginning.

“This is a pilot, this is going to inform what we do and how we develop this project over the next decade. We’ll take what we learn from these initial two plantings and wrap it into that future work to improve it,” Maslan said.

Because of the fragile nature of the new trees to be planted next spring, the public may be barred from entering the orchards for up to two months of the first few years so the saplings can mature.

Fruit can still be picked this summer from around July to September, and all “U-Pick” equipment is sanitized to combat the coronavirus pandemic.

Comments can be made on the project on the National Park Service planning website, by mail, or by email until March 18.

K. Sophie Will is the National Parks Reporter for The Spectrum & Daily News through the Report for America initiative by The GroundTruth Project.